Deep in the Guilin people’s mind, the most tasty and classic local delicacy is Guilin Rice Noodles (Guilin Mi Fen). Walking on the street, you will find a rice noodle eatery about every 100 meters (328 feet).

As a local fellow, I can eat rice noodles for breakfast, lunch, dinner and even a night snack. They are a must try for everyone who visits Guilin.

Guilin Rice Noodles have a history of more than 2200 years. The dish can be dated back to the Qin Dynasty (221BCE – 207BCE).When Emperor Qin Shi Huang gave the order to build the Ling Canal to transfer the troops to this deep-southern mountainous region to unify the whole of China, his soldiers, who were mostly northerners, were feeling sick due to the humid weather and “odd” food. (Why do northerners feel that southern food is “odd”? You may find the answer here.) In order to cure the soldiers and relieve their homesickness, the chef made noodles out of rice, which tasted similar to the noodles they were familiar with; the medical staff cooked herbal soup with local herbs. The soldiers recovered after drinking the herbal soup and eating the rice noodles. Hence it became the tradition to mix the herbal soup with rice noodles, which was the origin of Guilin Rice Noodles. 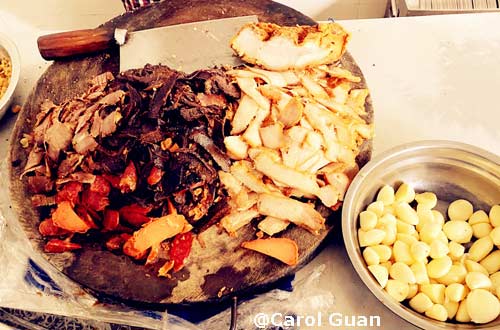 Rice noodles are made of rice flour starch with mostly two different appearances, round strips (Mifen 米粉 mǐ fěn) and flat strips (Qiefen 切粉 qiē fěn). Both are white, and taste soft, tender and smooth. Round strips are stronger, while the flat one is softer.

Toppings that come with the noodles are thin sliced beef, roast pork or ham, peanuts or fried soybeans. Extra paid choices are fried egg, seasoned egg, and deep-fried dough sticks. You can also pay extra if you want a few more pieces of meat. 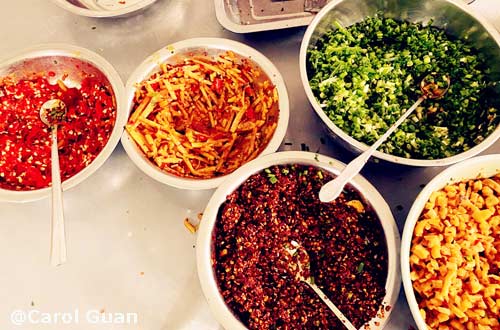 The Cream of It All

Slowly boiled gravy (herbal soup) with more than 20 different kinds of herbs and spices such as pepper, Sichuan pepper, cinnamon, dried tangerine peel and so on. Each Mifen chef has their own secret recipes to try to stand out from others. The unique recipe can be passed along to their descendants. Eaters would also have a specific Mifen stall they like the most. 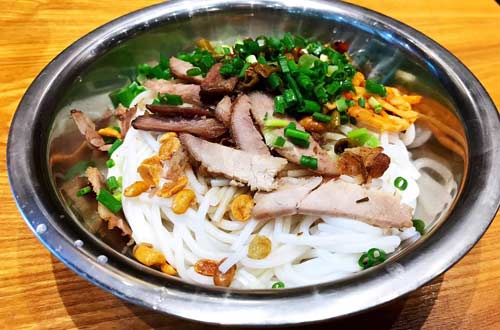 This is the most common and popular choice among the locals. Most people prefer Mifen (round one) over Qiefen (flat one) as Mifen is chewier. Walk into a Mifen Stall and head directly to the preparing counter, as well as shouting out: Erliang Mifen (二两米粉 èr liǎng mǐ fěn) in Guilin dialect (means 100 grams of rice noodles). This is what a local would do every morning. So life-like and authentic.

The cook will heat the noodles in boiling water for a few seconds, put them in a bowl and add the toppings, gravy and a bit of oil. Grab your bowl and you will find the seasoning counter next to you. Add the well-chopped condiments based on your personal taste to enrich the flavor. Stir them in completely and start digging-in. After you eat most of the noodles, you can add some extra broth, maybe also some coriander and scallions and then slurp up the remainder.

Some people may like broth noodles with more soup and a lighter taste. Each noodle shop has their own way of making the broth. The main ingredients are pork marrowbone, and chicken frame, and the additional ingredients include ginger, carrot, Chinese green onion, and pepper. When the broth is well cooked, pork meat or sirloin, soybeans, winter melon, seaweed and/or mushrooms will be added to gain a richer flavor. It is as simple as gravy noodles. Heat them in boiled water for a few seconds and then mix with the pre-cooked broth in a bowl. There will be no more toppings as they are already in the soup, but you can still add the seasonings such as pickled green beans, chili sauce and spring onion. Most people would choose flat noodles (Qiefen) for this. It’s more popular in winter time. 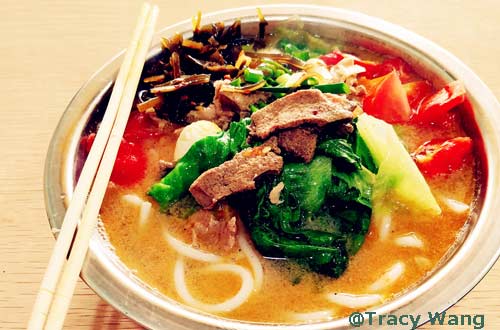 Similar to broth noodles, boiled ones are served with a big bowlful of soup too. The difference is the way it is made. This soup is freshly boiled after you order. You can choose the ingredients from pork, pig intestine, pig liver and quail eggs. The cook will put these in an iron wok with boiled water, along with some fresh vegetables like lettuce and bok choy, to make a tasty soup, for about 2 minutes. Pickled bamboo shoots and chili will be added if you require a sour and spicy flavor. Then the soup will be poured into the bowl with the pre-heated noodles. 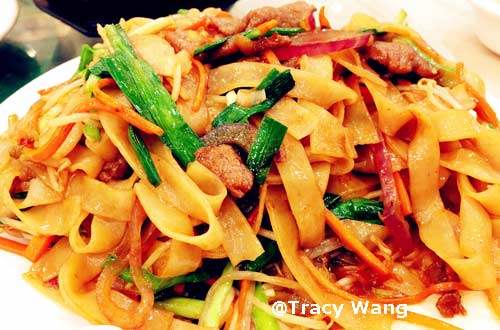 Both round and flat ones are commonly used for fried noodles. Sour and spicy fried noodles are the most popular ones. Different from the above 3 types, the noodles don’t need to be heated in advance. You can choose between pork and egg or both. The cook will stir fry them together with carrot, cabbage, pickled bamboo shoots and chili peppers. Then add noodles and quickly fry for less than one minute. Fried sour and spicy noodles, skewers, braised entrails and Liquan Beer are the most popular evening snacks for locals.

Where to eat Rice Noodles in Guilin

Guilin Rice Noodles are now a well-known delicacy throughout China. You can find Guilin rice noodle restaurants in other cities, like Beijing, Shanghai and Guangzhou, but they taste differently. Even the rice noodles in Yangshuo (60km/37miles from Guilin) don’t have the same taste as in Guilin. It is no doubt that the most authentic Guilin Rice Noodle is in its hometown, Guilin. There are at least 3 rice noodle restaurants on every small street in Guilin, so don’t worry about where to find one. Here we would like to recommend the best and most popular ones. 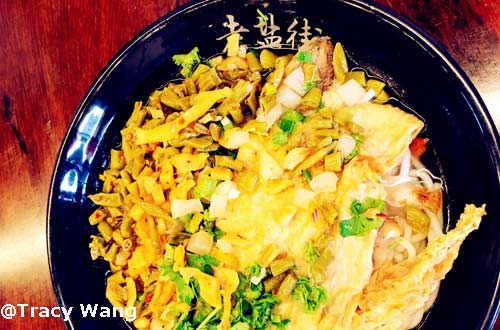 Youyi Xuan is one of the oldest rice noodle shops with a history of 100 years. The most famous and best-seller is Horse Meat Rice Noodle, which uses horse meat as a topping instead of pork or beef.

All local people know about Laodongjiang as it always adds a few more pieces of meat in your bowl. The gravy is thicker and more fragrant.

One of the oldest rice noodle shops in town. More local seniors like to eat there as a tradition.

4. Qingyun Soup Noodle 青云汤粉, No. 22 Huancheng Xi’er Road, Xiangshan District. The most famous shop specialized in soup noodles. The broth is light, but very tasty with a strong and persistent aroma.

Due to the influence of social media, some small rice noodles restaurants out of town are getting popular now. These are the most famous ones that you should try if time allows.

Each rice noodle stall has its now unique flavor of gravy, so there is always surprise to eat in different ones.