Few countries know the joy of noodles better than China. Noodles are an essential staple in Chinese cuisine. The earliest written record of noodles is from a book dated back to the Eastern Han period (25-220 CE). In 2002, an earthenware bowl containing the world’s oldest noodles dating from 4000 years ago was found at the Lajia archaeological site in Qinghai.

Noodles are generally made from either wheat or rice. Wheat noodles 面 (mian) are commonly produced and consumed in northern China, whereas rice noodles 粉 (fen) being more typical of southern China. They may be served in a salad, soups, or stir-fried. The shape of rice noodles varies from area to area as well as the cooking methods. Both fresh and dried rice noodles can be found in the markets.

This article will introduce you to China’s Top 10 Rice Noodles, commonly known as “mei fun”, or “mai fun” in Cantonese. As you travel and explore around China, you can get to taste some of these famous rice noodle dishes: 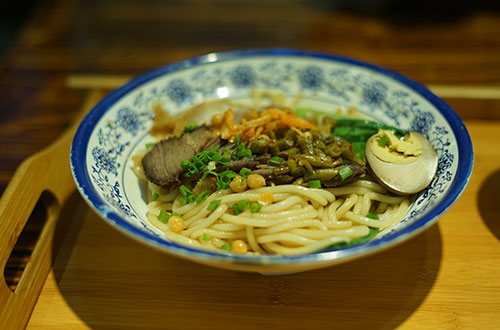 These noodles date back to the Qin Dynasty(221-207B.C.E). Legend has it that during the Qin Shihuang period, many soldiers from north China were sent to dig the Ling Canal near Guilin, in the south to integrate China. Soldiers from the north were not used to eating rice as their main staple in the Guilin area and missed their wheat noodles. Many of them became weak and sick due to the humid weather of the south. To help the soldiers deal with their homesickness of the north, a chef found a way to make the rice into noodles. He also added spices, such as star anise, cinnamon, coriander, to prepare a soup-base to serve with the rice noodles. The soldiers enjoyed the rice noodles, and gradually it became very popular among the Guilin and Yangshuo restaurants. The noodles are served in a pork bone broth, with some sliced roasted pork or beef, and topped with a variety of pickled condiments. A popular and traditional dish for breakfast or a snack during the day. For more details about Guilin rice noodles, please click HERE. As a major rice-producing area and birthplace of Hunan cuisine (or Xiang Cuisine 湘菜), Hunan people enjoy rice noodles and have many regional variations. Changsha rice noodles are one of the most popular ones among them. Changsha is the provincial capital of Hunan Province, with a population of 8 million.

For Changsha residents, a typical morning starts with a bowl of rice noodles, often served in a stewed bone soup, with toppings like diced, pickled string beans, stir-fried with minced pork and chili. Due to the popularity of rice noodles, there are over 6,000 rice noodle houses scattered around the city that nurtures a unique breakfast culture known as the "Hunan slurp", or the word “suo fen” (嗦粉) in the local dialect, which describes the action of eating rice noodles. 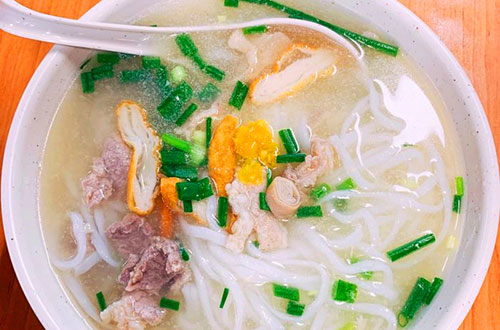 Nicknamed as the ‘Hawaii of the East’, Hainan Island is a tropical island at the southernmost point of China. It boasts long, beautiful beaches, luxury accommodation, festivals and carnivals galore, and year-round warmth and sunshine. Hou An Rice noodles were named after a town called Hou An Town in Hainan Island. It is popular all across the island. The Hou An Rice Noodle is a must-try local snack for tourists to Hainan, which is famous for its tasty and fresh soups. The broth is prepared with pig and ox bones, and shrimp. The popular condiments include a boiled egg, spring onions, and pig intestine. Mi-pi (literally translates to rice skin noodles) is made with rice, giving it a subtle fragrant rice flavor, with a silky smooth texture similar to the Cantonese rice roll. While delicious on their own, the noodles are the best swimming in an ocean of aromatic, dangerously red, and senselessly spicy chili oil made from Sichuan peppercorns and spices. The highly recommended mi pi restaurants can be found at Qinzhen (秦镇 Qin Town) which is about 40 km from Xi’an city center. Yang Rou Fen (Zunyi mutton rice noodle dish) is made with strips of mutton from the hairy mountain goat raised for its hair and meat across the hills of Guizhou. This dish is very popular in winter as local people believe mutton soup is a wonderful winter remedy that keeps you warm, as it is served in a spicy broth. Extra chilies during the cooking process is optional. Yang rou fen is rich and filling, often eaten for breakfast in Zunyi, is a great way to start your day. Many shops remain open 24 hours making it a popular midnight snack as well. Condiments such as pickled cabbage and radishes are added. A popular saying in the region goes: “Without eating sour food for three days, people will get weak legs,” suggesting that Guizhou people have a taste for sourness in their cuisine. In the past, people in mountainous areas did not have easy access to salt, therefore they used vinegar and other agents to preserve vegetables. Although they no longer have a shortage of salt, the tradition has continued in the region. Guizhou people are known to make good pickles. 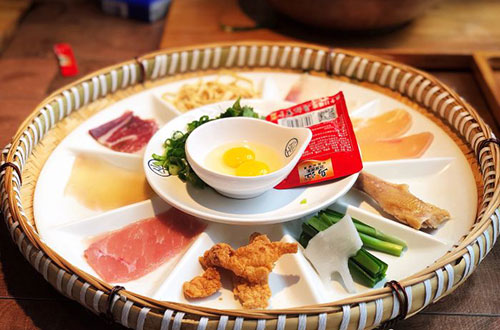 Unlike other rice noodles that are boiled or fried before serving, Crossing the Bridge Noodles are served in a large bowl of piping hot broth, made with chicken, pork bone, and seasonings, such as star anise and ginger. It is served with side dishes that include pre-cooked rice noodles, quail eggs, fresh thinly sliced chicken or pork, and raw vegetables. The correct way to have the dish is to first put the thinly sliced meat into the hot broth to cook it first, then add the quail eggs, vegetables, and lastly the rice noodles, then using chopsticks to combine all the ingredients before serving. Oil, chili, vinegar, and soy sauce can be added according to personal taste.

The dish is thought to have originated in Mengzi, a small city in Yunnan Province about a scholar studying for the imperial exams on a small island during the Qing Dynasty (1644-1911). Every day, his faithful wife would bring him noodles but found that by the time she had crossed the bridge the noodles were cold and soggy by the time she got there. She then decided to get a large earthen pot and placed the boiling broth in it, with a layer of oil on top that would act as insulation and keep the broth warm. The noodles and other ingredients were kept in separate containers, and when she arrived, she mixed the containers of ingredients and added it to the hot broth. When her scholar-husband passed the exam, he named the noodle dish guoqiao mixian or" Crossing the Bridge Noodles” in honor of his wife’s dedication. A specialty of Liuzhou, a city near Guilin in southern China’s Guangxi Province. Luósīfěn is translated as ‘snail rice noodles’ is served in a soup. The soup stock is made by stewing river snails and pork bones for several hours, with black cardamom, fennel seed, dried tangerine peel, cassia bark, cloves, pepper, bay leaf, licorice root, sand ginger, and star anise. Pickled radish, dried tofu skin, fresh green vegetables, peanuts, and loads of chili are then added to enhance the flavor. The most favored addition for locals is stewed duck feet, pig trotters, and boiled eggs. You will find many small ‘hole-in-a wall’ noodle places that sell this popular rice noodle dish around Guilin and Yanghsuo. Like instant noodles where you just add boiling water, you can now buy prepackaged instant luósīfěn in the supermarkets. Known as gon chow ngau ho in Cantonese, is a classic Cantonese dish made from stir-frying thinly sliced beef, wide flat rice noodles (河粉 Ho fun), scallions, ginger, bean sprouts, and dark soy sauce. You can find it in dim sum restaurants in Guangzhou and eateries in Hong Kong. It is a popular dish among westerners. Ho fun is a wide flat rice noodle which is also known as Shahe fen as it originated from Shahe, Guangzhou. Ho fun is usually cooked in soup or stir-fried. When fried, there are two variations dried-fried (fried without sauce) or wet-fried (fried with a sauce). Another popular dish is steamed pork ribs with ho fun noodle (河粉蒸排骨 hé fěn zhēng pái gǔ). The Hakka is a cultural group originating from China’s Central Plain. They migrated to Southern China (especially Guangdong, Fujian, Jiangxi, and Guangxi provinces) during the fall of the Southern Song dynasty in the 1270s. Today, they can be found in regions such as Hong Kong, Guangdong, Taiwan, Singapore, Malaysia, and many countries in South-East Asia. In the process of migrating and setting up their homes in southern China, Hakka migrants found it difficult to obtain and preserve fresh food. They grounded rice into a syrup, added potato starch or sweet potato starch and water, then poured the mixture into a square-shaped platter to steam, producing a more durable flat rice sheet, which was then cut into strips, and finally dried in the sun.

It can be served as a cold noodle salad with olive oil or vinegar and salt as a dressing or it can be placed in a broth to make noodle soup with tofu, prawns, or vegetables. 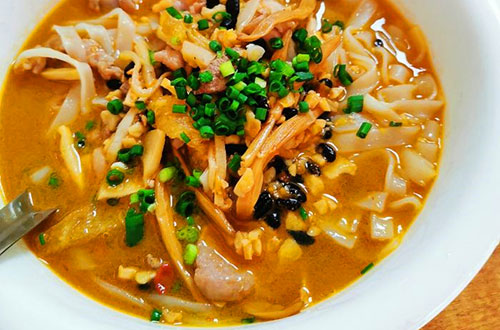 Lao You Fen (老友粉), translates as "Old Friend Rice Noodles" is synonymous with Nanning, capital of Guangxi Zhuang Autonomous Region in Southern China. Legend has it that an old man went to Zhou Ji Teahouse every day and made friends with the Boss Zhou. One day he was not able to go due to a cold. Boss Zhou made a bowl of hot rice noodles, especially for his old friend. The rice noodle dish had so many flavors including garlic, fermented bean, pepper, beef, and sour bamboo shoots that helped the old man recover quickly. From then on, Lao You Fen became popular for its flavors and cold-busting abilities.

From restaurants to street stalls, city to city, province to province, you will find many varieties, no noodle dishes are the same. As you step out and explore this country, be sure to include a hot bowl or plate of rice noodles in your travels. There’s even an idiom that can be translated as “no satisfaction without noodles (无粉不欢- wú fěn bù huān). 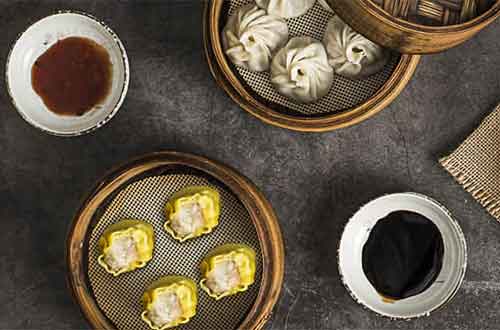 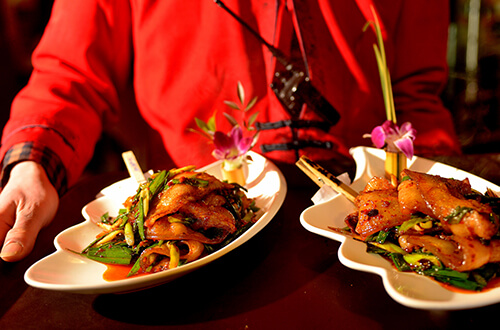