Chinese New Year , also known as Spring Festival (春节 Chūn Jié), is a joyous and peaceful festival for family reunions. People who have left home want to come back before Chinese New Year’s Eve. Thus transportation during the Spring Festival Period is considered to be the largest annual migration. It is very difficult to buy train and flight tickets in this period.

January 1st on the Gregorian calendar is New Year’s Day in most countries of the world. The first day of the first lunar month is the Chinese New Year (Spring Festival). It takes place in the next 10 years on the following dates.

The day before Chinese New Year is the Lunar New Year’s Eve, namely “Chú Xī”. People in northern China like eating dumplings, and in the south of China, they prefer eating glutinous rice cakes.The whole family stays up late into the night to wait for the clock to strike 12. After that, every household in rural areas sets off firecrackers, while those who live in the cities can only set off firecrackers in the designated places for environmental protection. 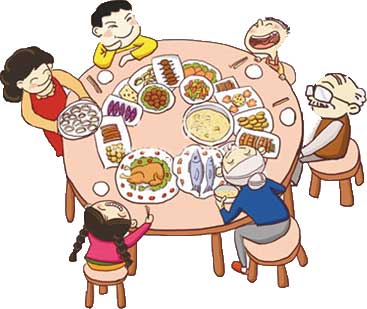 On the first day of the Lunar New Year, men and women, elders and children, get dressed up for the festival. Paying everyone a New Year’s greeting, and visiting relatives and friends are the important activities on the day.

There are no other traditional festivals which are more significant than Chinese New Year with its time-honored history and rich social civilization. There are a series of ceremonies in this long holiday of celebration, in which traditional Chinese nationality and folk culture are observed. In its historical development, Chinese New Year is not a simple festival, but ties in with Chinese people’s everlasting emotion and cultural identity. It is the perfect occasion to taste the fruit of happiness.

In the lunar calendar

Day 1-7: visit relatives and friends; give some gifts and red envelopes.

Day 8: most people go back to work.

"Spring Festival Economy": The Spring Festival is not only a traditional festival, but also a holiday to promote domestic consumption and boost the economy. It sparks consumer demand exceeding material requirement, and helps industries including those that involve culture, commerce, tourism, transportation, catering, entertainment and other fields. With the development of modern network technology, giving envelopes online by Alipay or WeChat is also greatly popular.

Spring Festival Travel Rush (春运 Chun Yun): This is a peak time for passenger transportation. During a 40-day travel period, there are multiple flows, such as students, migrant workers, family visitors, in numbers which amount to no less than 2 billion people, or about 1/3 of the population of the world. The Spring Festival rush has been listed as the world’s largest cyclical peak in the world records.