Chinese New Year is the most important festival both in China and also Chinese communities around the world, and it begins with the new moon that occurs sometime between January 21 and February 20 according to Western calendars. The holiday was traditionally a time to honor household and heavenly deities as well as ancestors. Now it is mainly a time to bring family together for feasting.

What Music is Played on Chinese New Year?

In the Chinese language, the character for 'music', 乐 yuè, is written the same as lè, meaning 'happy'. Music was an important part of the ritual system in ancient China. It is also an important part of the Chinese people’s daily life. Great music always goes hand in hand with celebrations; Chinese New Year is no exception. Chinese New Year just wouldn’t be the same without its auspicious songs. For decades, auspicious pop songs resounding with Chinese instruments have been spreading joy and wishing people good health and wealth. Special songs for the New Year include those containing well wishes for others. "Gongxi, Gongxi" means "Congratulations/Good Wishes," "Gong Xi Fa Cai" means "wishing you wealth and prosperity," and "Xin Nian Kuai Le" means "Happy New Year".

The China Central Television (CCTV) Spring Festival Gala (AKA ‘Chunwan’) is the largest TV show in China, watched by almost 1 billion viewers in China. It has already become a ritual for Chinese families to watch the gala after their reunion dinner on Chinese New Year’s Eve. Watching the Gala is inextricably entwined with fond memories of going home, seeing family, and being in the festival spirit. Many popular Chinese New Year songs were once sung on the stage of Chunwan, that’s why they are so popular.

Below we list seven songs being played the most during the Chinese New Year holiday.

This was sung by Sun Yue as the first song for Chunwan in 1999. The song is widely recognized as a festival classic because of its catchy melody and auspicious lyrics wishing everyone a happy year ahead. It’s been 21 years since the reform and opening up policy was launched in 1978; the Chinese economy is booming. The lyrics expressed that Chinese people are very happy with their life.

The Spring Festival is also called "Guo Nian", which means “pass the year”, but do you know that Nian was once the name of a furious monster that fed on human beings? According to Chinese legend, long, long ago, there was a monster called Nian. It looked like a unicorn with sharp teeth. On the eve of Chinese New Year, the monster would come down from the mountains to hunt people. So people were very much afraid of it and locked their doors early before sunset on the days of its coming. But one wise man found that the monster is very afraid of loud noise and red colors, so he recommended that the villagers beat drums and gongs, burn bamboo, and light fireworks for the purpose of making large noises to threaten the hateful monster. And families also pasted red couplets on their gates. When Nian came, it was so scared to find the red couplets and hear the loud noises, it fled and died of exhaustion. People have kept the tradition alive by beating drums and gongs, and lighting fireworks on the eve of New Year to drive the imagined monsters away and to celebrate the victory over it.

“Come Back Home More Often” was first released in 1999 and on stage of Chunwan of the same year. It quickly became popular in China. With urbanization and economic development in China, more and more countryside people leave their home villages to work as a migrant workers in the cities. Usually the aged parents and young children are left behind; they want to find time to visit their parents and children back home, and the Chinese New year holiday is the best time to do so. The lyrics express how children who are away from home should often visit their parents. In China, family matters far more than anything else and “home” is still very much the place where Chinese people’s hearts are. People travel thousands of miles to go home to get together with parents and grandparents. All of them sit around the table, eating, chatting and laughing. For those who want to but cannot make the trip back home, they must feel that something is missing.

This song is sung by Andy Lau, a very famous star in China. Andy Lau personally got involved in the composing of its lyrics, expressing the hope that the world will stay peaceful, and bad things won’t happen in the future, so that everyone has a happy New Year. Although many people associate this phrase with Chinese New Year, Kung hei fat choi doesn't mean Happy New Year. The greeting is frequently used at this time of year but it actually delivers a wish for prosperity to the person you say it to. It is regularly used as a seasonal greeting in professional environments. Kung hei fat choi is the Cantonese way of saying the phrase and in Mandarin Chinese, it’s gong xi fa cai (pronounced ‘gong she fa tsai’). Read more on Chinese New Year Greetings - How to say "gong xi fa cai" in mandarin & meaning.

Cai Shen or the God of Fortune / God of Prosperity is one of the most popular pantheons among the Chinese community. His popularity is due to his primary duty as an accountant guarding all the treasuries of heaven. He is also able to bestow fortune to suitable candidates on earth. His birthday is on the 5th day of the Lunar New Year. Cai Shen is depicted riding a black tiger and holding a metallic rod as his weapon. Chinese people in the countryside still paste fortune god posters at the door to usher in good luck and good fortune.

“ Everywhere on the streets,

The first phrase from people’s mouths

When meeting is congratulations,

Out of the many Chinese New Year songs being sung all over the world, there is none more popular than the classic 'Gong Xi Gong Xi' tune. You may be surprised to learn the song wasn't even intended for Chinese New Year in the first place!

In fact, it was written by popular composer Mr. Chen Gexin to celebrate China's victory and liberation following Japan's defeat at the end of the Second Sino-Japanese War (World War II) in 1945. One of the darkest marks in China's history, the Second Sino-Japanese War (7 July 1937 to 9 September 1945) was the largest Asian war in the 20th century, killing 35 million people in China. It was also during this war that the infamous Nanking Massacre took place. The massacre took away over 300,000 lives, most of them civilians.

The song's title – 'Gong Xi Gong Xi' – is also a common Chinese New Year greeting. The words in the song also celebrate the arrival of spring, which is often used as a symbol of the arrival of the new year. Hence, the song quickly became associated with Chinese New Year celebrations and has remained a part of the festive season's musical canon since the 1950s.

Xin Nian Hao means “Happy New Year”. It is a children's song for New Year, and most Chinese kids are familiar with it. The lyrics are very simple and very easy to learn. We have attached the lyrics below:

We are singing; we are dancing.

We are singing; we are dancing.

Apart from being a time to feast and reunite with family, the Chinese New Year celebration is often accompanied by a large array of customs and rituals. Anyone can incorporate these traditions to welcome in the New Year and hope for some good luck. The most popular tradition is giving red envelopes. They are decorative envelopes filled with cash gifts that are usually given from adults to children and from married couples to their younger, unmarried family members. Chinese people do everything during the festival in the hope that it will bring good luck to their loved ones and themselves. Not surprisingly, this song entitled “Hao Yun Lai” (good luck, good fortune) will be one of the most played songs during the Chinese New Year celebration.

Other than songs, some pure music is played at happy occasions. The following three are the most popular ones.

It was created in 1958 by the late Chinese folk music master Mr. Liu Mingyuan. The swift and cheerful nature of the rhythm is reminiscent of a relaxed and festive atmosphere. It was often played during wedding ceremonies.

This music was composed by Mr. Nie Er, who was best known for his "March of the Volunteers", the national anthem of China. This is a cheerful piece of music, with bright and expressive moods and spirited percussion. It was used as the background music for the closing ceremony of the Beijing 2008 Olympic Games.

Inspired by classical silk-and-bamboo music of South China , conductor and composer Mr. Huang Yi-Jun composed this cheerful music in 1935. It describes the scene of people enjoying the flowers and dancing happily under the moonlight. The music employs as many as 15 kinds of traditional music instruments such as Dizi (笛子), Gaohu (高胡), Erhu (二胡) and Yangqin (扬琴) etc.

For Chinese people, ‘Blooming Flowers and Full Moon’ refers to the beautiful times. That makes it perfect background music during Chinese New Year. It also can be used as a good wish to a newly married couple. 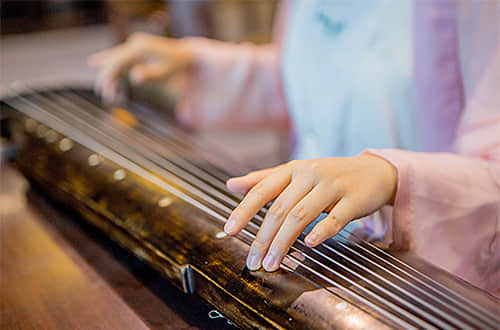 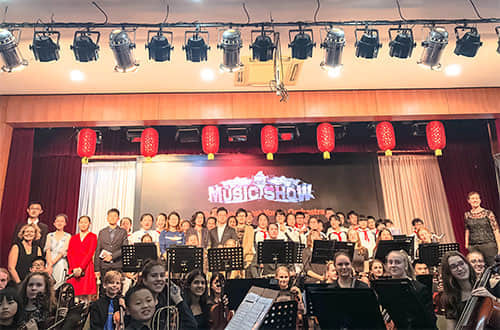