How to Travel to Jiayuguan Great Wall

Jiayuguan is located about 6km southwest of Jiayuguan City, in the middle of the narrowest valley of Jiayuguan Pass. The city walls were built through the desert. 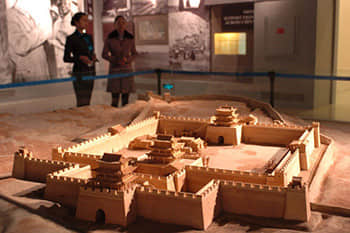 1. Jiayuguan Museum of the Great Wall

The Museum is distinguished for its intuitive style and various collections. The oil painting of the Great Wall presents the main attractions with impressionistic and figurative art in a scroll that covers 220.5 square meters. There are 121 exhibition boards, more than 15,000 characters, 142 paintings, 20 models, 242 cultural relics, copies of 38 cultural relics, 11 three-dimensional sculptures, 110 square meters of relief sculptures, and 36 charts. Badges of the Great Wall, the Bronze Cannon in the Yongle Period of the Ming Dynasty, and wooden printing plates of Jiayuguan Pass are precious materials for researching history and culture of the Great Wall.

The Hanging Great Wall is the north section of Jiayuguan Pass. It was an important part for defense in ancient times. The city wall is situated on the Hei Mountain and is very sturdy. It is very hard to climb, although it is not as steep as Badaling Great Wall. The steps at the middle part of the Wall are quite high. The existing Hanging Great Wall is 750 meters long. Follow a track on the side of the top; you can admire the beautiful view of Hei Mountain.

It is the starting point of ancient Great Wall. Actually, it was a beacon tower, but only a mound remains. Scenic spots include Taolai River Ropeway, Tianxian Hanging Bridge, and a group of sculptures named “Zui Wo Sha Chang” that means ‘the people who have drunk fall on the battleground’. Taolai River is the mother river of Jiayuguan City, which is quite scenic. This splendid river derives its water from melting ice in the Qilian Mountains and flows to Jiayuguan where there is a drawbridge over it.