Buddha's Smile for Thousands of Years

With their 252 caves and 51,000 statues, the Yungang Grottoes represent the outstanding achievement of Buddhist cave art in China in the 5th and 6th centuries. It also reveals the power and endurance of Buddhist belief in China.

The Yungang Grottoes, Ajanta Caves in India, and the Bamiyan Caves in Afghanistan are known as the world’s three major treasure houses of stone carvings.

Location: The site is located about 16 km west of the city of Datong, Shanxi Province in northern China. 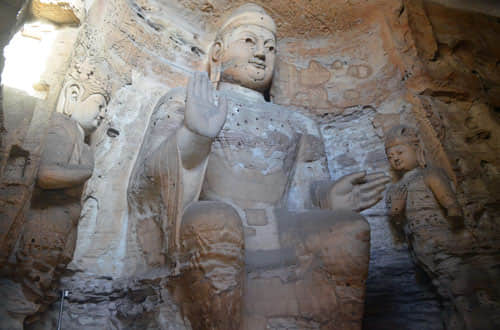 The Yungang Grottoes was formerly called the Wuzhou Mountain Grottoes. It comprises about 252 caves and 51,000 statues in which the largest one is as high as 17 meters, while the small ones are only several centimeters in height. The site stretches about 1 kilometer from east to west and was hollowed from the sandstone cliffs of the Wuzhou Mountains during the 5th century CE under the patronage of the Northern Wei Dynasty. Founded by the Tuoba or Toba people, who ruled northern China during the Northern and Southern Dynasties period (310-589 CE), the Northern Wei Dynasty adopted Buddhism as its state religion. Work began at Yungang by Emperor Wenchengdi who reigned from 452-465 CE. In 494, the Northern Wei moved their capital from Pingcheng (present-day Datong) to Luoyang.

Caves you should not miss

Historically the caves have been divided into three major stages: The caves numbered 16 to 20 (the "Five Caves of Tan Yao") were carved between 460 and 465 under the supervision of a Buddhist monk Tan Yao. Caves 1, 2,3 (unfinished), and 5 to 13 were carved in the second stage, which began in 471 and ended when the Northern Wei Dynasty capital was moved from Ping Cheng (present-day Datong) to Luoyang in 494. The remaining caves carved after 494, without imperial patronage, but donations from officials, gentries, and commoners are not as notable as previous caves.

For sheer size, Caves 16 through 20 are the most impressive. To please the Emperor, Tan Yao made his five big Buddhas resemble the Wei emperors in features. All dominating Buddhas were over 13 meters in height. Their tall majestic physique represented the almighty power of Buddha and the Emperor. The best of them, Cave 18, contains the colossal image of Sakyamuni, the 10 arhats (enlightened disciples) associated with him, and two attendant Buddhas. The Buddha to the right of Sakyamuni has a webbed hand -- one of the 32 marks of a superior being. His robe was originally red, his face white, and his hair black. Traces of his green mustache and beard can still be seen, and echo the art from Iran.

Largest of the Buddhas in the Tan Yao caves is the sitting figure in Cave 20, the 14m-tall seated Buddha is an icon of Chinese art, comparable to the colossal exposed Buddhas of Dunhuang and Longmen. It was originally flanked by a pair of smaller standing Buddhas, of which only the eastern figure now remains. Square holes in the back wall once socketed the beams of a wooden protective facade, now long-gone. The lower parts of the figures have spalled away, a fate shared by many sculptures at Yungang. 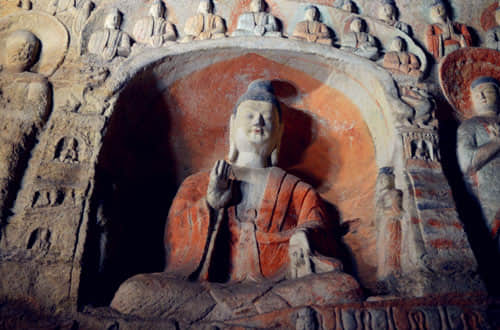 There is much more going on in the second group of caves, many of which depict stories from Buddhist scriptures. Cave 1 is interesting for its Chinese-style architectural features in the bas-reliefs of buildings, though many of the images have eroded. Cave 3 is the largest of the caves. The fuller bodies of the three Buddhist images suggest it was carved as late as the Sui or the Tang dynasties. Caves 5 and 6 were both carved before 494, but the four-story wooden facade dates from 1651. Cave 5 houses the largest carving at Yungang -- a stunning Sakyamuni in meditation. In Cave 6 look for the two Buddhas, Sakyamuni, and Prabhutaratna, facing each other. This customary pairing alludes to an episode from the Teaching of the Lotus Sutra. In this episode, a stupa (shrine) containing the relics of the Prabhutaratna Buddha appears in the sky. Surrounded by Buddhas and bodhisattvas, Sakyamuni rises to the stupa and unlocks it with his finger. Out comes the extinct Prabhutaratna, who praises and congratulates him. Other episodes from the life of Sakyamuni decorate the walls. On the entrance arch of Cave 8 are contented images of Shiva and Vishnu (two of several Hindu deities who found their way into Buddhism). The discs they hold represent the sun and the moon. Some sources identify the small bird on Vishnu's chest, and the larger one on which his feet rest, like the mythical garuda -- the vehicle (and disciple) of Vishnu; others, less convincingly, call them phoenixes, a Chinese motif. Traces of ancient Greece appear in the classical bow with an inward curve at its center. (As in this relief, the bow is commonly held in the left "wisdom" hand. Presumably, the missing right "method" handheld an arrow.) A seated Maitreya Buddha (Future Buddha) dominates Cave 13. Most delightful about this statue is the figurine of a four-armed attendant who stands on the Buddha's thigh while supporting its huge raised arm -- the artists' solution to a crack in the stone.

Cave No. 12, also known as the Music Cave, was carved in the 5th century, with rich images of heavenly figures and musical instruments from home and abroad. These figures represented the earliest royal symphony orchestra in ancient China and played a vital role in the history of Chinese music and dance.

In 460 CE, the project of Caves 16 to 20 began; it was under the supervision of a famous monk Tao Yao. Some 40,000 people, including the Buddhists from what is present-day Sri Lanka, contributed to the huge project.

In 494 CE, most of the stone carvings in the grottoes were completed. The Northern Wei Emperor Xiao Wen moved the capital to Luoyang. After this, the royal family stopped the support for the caves project; the new caves were donated by officials, the wealthy, and the commoners.

In 524, Northern Wei was plagued by agrarian rebellions to the north and west. The cave project was suspended.

In 1651, some temples at the site were restored. We can still find the extant wooden structures at Caves 5 and 6.

In 1952, a special committee was formed to protect the grottoes. It was open to the public the same year.

In 1961, The State Council listed the grottoes as the first group of State Priority Protected Sites.

In 2001, the Yungang Grottoes were made a UNESCO World Heritage Site.

In 2007, it was rated a 5A tour site by China National Tourism Administration. In China, we have a tourism-rating classification system that rates a tourist attraction from 1A to 5A for its overall tourism quality.

Other Highlights in the vicinity of Datong:

Located in Yingxian County, about 70 kilometers south of Datong. Built in the year 1056 CE, the Yingxian Pagoda measures 67.31 meters tall, 30.27 meters wide, and weighs around 2600 tons. Entirely made of wood, this oldest wooden tower was built without any nails or screws. 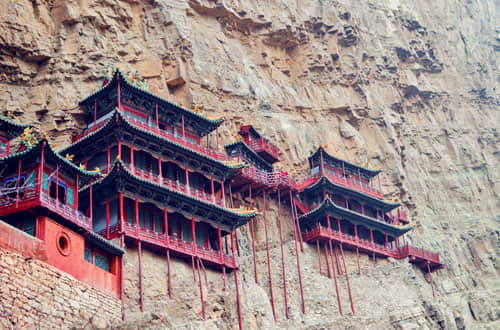 A temple built into the side of a cliff during the late 5th century. Interestingly, the temple is dedicated to not just one religion, but three – Confucianism, Taoism, and Buddhism which are all practiced within the temple and represented in 78 statues and carvings throughout.

Built at the end of the Hongwu Period (1392 CE) of the Ming Dynasty, about 600 years ago. It is the largest one among the extant Nine Dragon Screens (the other two are the Nine Dragon Screen in Beihai Park and Nine Dragon Screen in the Forbidden City). This gorgeous decorative wall once fronted the palace of the Dai Prince (destroyed but now being reconstructed). On the wall, there are nine dragons made with colored tiles.

Even though a newly built city wall, you can enjoy walking or biking along it during the day or night. There is a City Wall Museum, showcasing the construction and development of the city wall from all different dynasties.

How to fit Yungang Grottoes in my tour to China?

Yungang Grottoes is near Datong, which is about 340km from Beijing. You can get to Datong from Beijing by vehicle, flight or train. A bullet train will get you there in approximately 2 hours. It is suggested to include Datong, Mount Wutai (UNESCO World Heritage Site), and Pingyao Ancient City (UNESCO World Heritage Site) in your itinerary. You can find a tentative itinerary HERE.