A Time Capsule of the Silk Road

At the heart of the ancient Silk Road, on the edge of the Gobi Desert, lies a centuries-old place of pilgrimage: hundreds of caves hewn from a sandstone cliff containing some of the most exquisite Buddhist murals and sculptures in the world. Known as the Mogao Caves this UNESCO World Heritage site is one of the great artistic and religious wonders of the world.

One evening in 366 CE, a wandering monk named Yue­zun saw a thousand golden Buddhas blazing on a cliff. Inspired, he chiseled a small meditation cell into the rock; others quickly followed. The first caves were no larger than coffins. Soon, monastic communities began carving out larger caverns for public acts of devotion, adorning the shrines with images of the Buddha. It is these early grottoes that inspired the nickname “Caves of the Thousand Buddhas”, or also known as “Thousand Buddha Grottoes”. 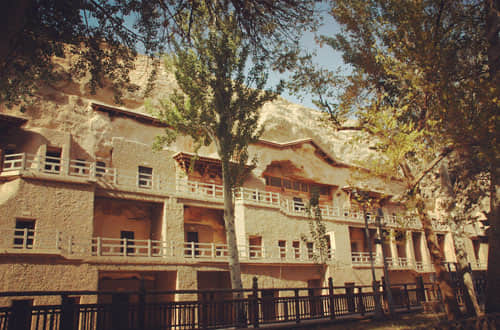 One of Mogao's creative peaks came during the 7th-8th centuries when China projected both openness and power. The Silk Road was booming, Buddhism was flourishing, and Dunhuang was paying fealty to the Chinese capital. The Tang cave painters displayed a fully confident Chinese style, covering whole walls with minutely detailed Buddhist narratives whose color, movement, and naturalism made the imaginative landscape come alive. The Middle Kingdom would later turn inward, finally shutting itself off from the world during the Ming dynasty in the 14th century.

In June 1900, Wang Yuanlu, a Chinese Taoist monk, discovered the scrolls in a sealed cave. He is one of the most infamous figures in the history of Chinese archaeology. He stayed at the Mogao Caves, taking care of the Buddhist temple complex, when Aurel Stein, a Hungarian-born scholar working for the British Government in India and the British Museum, made it to Dunhuang in early 1907 using Xuanzang's 7th-century descriptions to guide him across the Taklimakan Desert. Wang refused to let the foreigner see the scrolls from the Library Cave—until he heard that Stein too was a keen admirer of Xuanzang. Many of the manuscripts, it turned out, were Xuanzang's translations of the Buddhist sutras that he had brought from India. 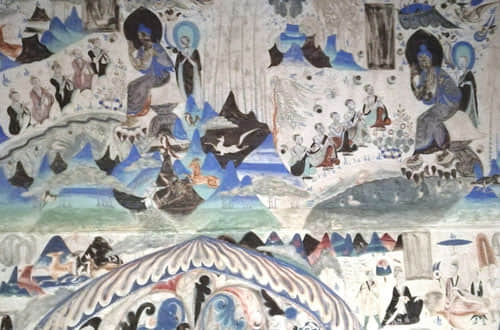 From then on, other explorers—the French, Russian, Japanese, and the Dutch—quickly followed in Stein's path to acquire some of the manuscripts. One in particular, during 1924 was an American art historian, Langdon Warner, an adventurer who may have served as an inspiration for the fictional Indiana Jones. Enthralled by the beauty of the caves—"There was nothing to do but to gasp," he later wrote. Warner during his time in China is the subject of much controversy among art historians. Some say that he pillaged sites of their art, using a special chemical solution for detaching wall-paintings.

In 1943, the Dunhuang Art Institute, now known as present-day Dunhuang Research Academy (DHRA), was established by the Chinese Government. Since then, the DHRA has carried out many large projects with the accumulated effort of several generations; some of them done in collaboration with other local or overseas institutions.

In 1961, the Mogao Caves were announced as part of the priority group of heritage sites to be placed under-emphasis by the State Council.

In 1987, it was listed as a UNESCO World Heritage Site.

8 Interesting Things You don’t Know about the Mogao Caves

1. The caves contain the world’s largest collection of Buddhist art

The decorated walls and ceilings of the cave span approximately 500,000 square feet. They are covered by elaborate paintings depicting stories of the Buddha, Buddhist sutras, portraits of cave donors, ornamental designs, and scenes of social and commercial life. The caves also contain more than 2,000 brightly painted clay sculptures of the Buddha and other figures, the largest sculpture being over 100 feet tall.

It is an emerging interdisciplinary subject that covers areas such as history, geography, linguistics, archeology, and art.

3. The site was a melting pot of cultures. 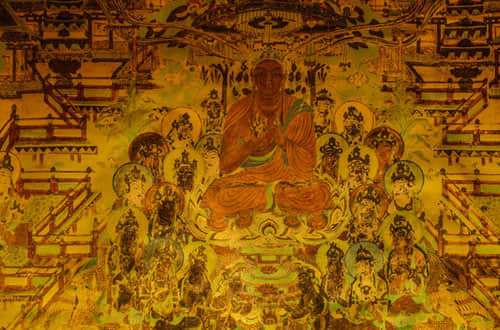 Although a Buddhist site, the art, and objects found at Mogao reflect the meeting of cultures along the Silk Road, the collection of trade routes that for centuries linked China, Central Asia, and Europe. Discovered at the site were Confucian, Daoist, and Christian texts, and documents in multiple languages including Chinese, Sanskrit, Tibetan, and Old Turkish. Even Hebrew manuscripts were found there.

The Diamond Sutra, is the earliest and complete printed book with an attested date (868 CE), which is among the most notable documents found in the Library Cave. Using carved wooden blocks, the book was printed onto strips of paper that were then pasted together to form a scroll. The text is a Chinese translation from Sanskrit of a highly regarded Buddhist sutra and is now part of the collection of the British Library.

The Library Cave (Cave 17), which was unsealed by Wang Yuanlu, contained nearly 40,000 ancient manuscripts, silk banners and paintings, fine silk embroideries, and other rare textiles dating before the early 1000s when this cave and all its contents were concealed for reasons still unknown. Shortly after this discovery, many of the objects from the cave were acquired at the site by explorers and archaeologists from the West and Japan.

6. The caves lay forgotten for hundreds of years.

The Silk Road fell into disuse by the 1400s, and for centuries Mogao was all but forgotten, with the caves’ entrances choked by sand from the Gobi Desert. In the 1890s a Daoist monk named Wang Yuanlu appointed himself the guardian of the caves. In 1900 he discovered a cache of manuscripts, long hidden in a small sealed up cave, coming upon one of the greatest collections of documents in history.

7. Medieval China comes alive through documents found in the caves.

The materials found in the Library Cave offer a vivid picture of life in medieval China. Accounting ledgers, contracts, medical texts, dictionaries, and even descriptions of music, dance, and games were among the finds.

8. The caves were once a prison for 500 Russian soldiers for 5 months.

In 1921, Russian soldiers who had retreated into China during the war against the Bolsheviks were detained by the Chinese Government and temporarily jailed in the caves. The damage from their fires, and their graffiti, is still visible in several caves. 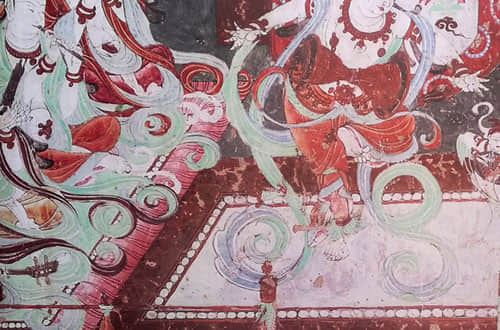 Due to a massive increase in visitor numbers (including school tours), the access procedure has undergone a revamp, and all visitors to the Mogao Grottoes now have to go via the visitor’s center, a few kilometers outside of central Dunhuang. The ¥258 'A' ticket includes transport to the grottoes, access to four museums and admission to two 30-minute films, one on the history of the area and the Silk Road, and one that allows close-up computer-generated views of the cave interiors not normally open to visitors, in an IMAX-style theatre. From the visitor’s center, purchasers of both 'A' and 'B' tickets are shuttled to the caves 15km down the road by coach. The ¥100 'B' ticket is only for those who have an understanding of the Chinese commentary (and includes transport to the Mogao Grottoes and access to three museums). After the tour, you are free to wander around the site and catch whatever coach you like back to the visitor’s center at your leisure. Once you arrive back to the visitor’s center you will not be allowed back into any of the caves. The ¥50 'C' ticket only covers access to the films in the cinema at the visitor’s center. 'A' tickets are limited to 6000 tickets per day; 'B' tickets are limited to 12,000 tickets per day. Purchasing tickets is not straightforward. 'A' tickets must be purchased in advance either online at the caves' official website (Chinese-language website only; a Chinese phone number and Chinese ID card are required for purchase) or in Dunhuang from the Mogao Grottoes Reservation and Ticket Center, though may not be convenient due to its location. There is a separate booking office in the eastern part of town where staff members speak English.

During the high season, you should buy your ticket a day or more in advance from the Mogao Grottoes Reservation and Ticket Center.

Of the 492 caves, 20 ‘open’ caves are rotated fairly regularly. The entrance is strictly controlled – it is not possible to visit them on your own. You will be guided by a guide from the site. On the 'A' ticket, you will be given an approximately 2-hour tour of eight caves, which should include the famous Hidden Library Cave (cave 17), the two big Buddhas including the vast 35.5m tall Buddha in Cave 96 (behind the iconic seven-story pagoda) and another 26m-tall Buddha statue, the vast reclining Buddha, in Cave 148, as well as a chance to see rare fragments of manuscripts in classical Uyghur and Manichean. The 'B' ticket gives you access to half the number of caves and may be useful if time is tight (but remember the tour on the 'B' ticket is in Chinese only).

Photography is prohibited inside the caves. If it’s raining or snowing or there's a sand storm, the site will be closed.

How to fit Mogao Caves into my tour to China?

An oasis located at a religious and cultural crossroads on the Silk Road. It is the best fit when you start the Silk Road route from Xi’an then travel west to Lanzhou, onto Zhangye and Jiayuguan, then Dunhuang, and finally arriving at Urumqi; or you can reverse the itinerary and start at Urumqi.

Other highlights at the vicinity of Mogao Cave

About 160 km from Dunhuang, the Yadan landform has been created over time due to erosion caused by rain and wind, leaving unusual rock formations. The park is also called Devil City because visitors describe the noise of the strong wind whistling between the Yadan as sounding like the devil screaming.

Located 170 kilometers southeast of Dunhuang, the Yulin Grottoes is a branch of the Mogao Grottoes, similar to the ones found in Dunhuang County. There are 42 caves with complete frescoes, comprising of huge scripture drawings, portraits of Buddha, rare animals and plants, harvests, weddings, banquets, chess, brewing, music, and dancing. 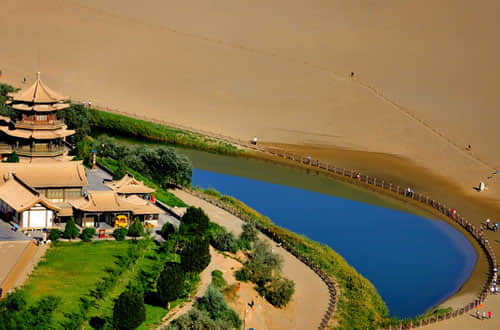 As the joint part of Taklimakan Desert and the BadainJaran Desert, the Echo Sand Mountain has one of the most beautiful sand dune complexes in China. It is a must-see along the Silk Road. Crescent Moon Lake has existed in the middle of the sand for centuries. Climb up to the highest sand dunes, you will have a birds-eye view of the sand and the lake.

Covering an area of 2,400 square meters (25,834 sqft). All of the exhibits in the museum are displayed in three sections. In the first section, the written sutras from the No.17 Cave of the Mogao Caves in Dunhuang are shown. In the second section next to the sutras, a selection of the relics excavated from the graves of different dynasties is displayed. The third section of the display holds several exhibits that illustrate Dunhuang's flourishing culture including some exquisite silk floret brocade and bamboo slips used for writing. Additionally, iron and bronze tools and weapons are also displayed.