Mona Lisa of the East

The Longmen Grottoes meaning 'Dragon's Gate', exhibits some of the finest examples of Chinese Buddhist art. It was built approximately 1400 years in 493 CE. These grottoes, along with the statues and inscriptions carved provide a window into the political, cultural, and artistic insight into the late Northern Wei (386-534CE) and Tang periods (618-907CE).

One of the largest and most impressive sites in China, there are over 2,800 inscriptions carved into the cliffs. Most inscriptions were inscribed during the Northern Wei dynasty, known as the Weibeiti calligraphy (魏碑体) which are characterized by free, easy, elegant, and upright forms in varied sizes. Lines are arranged artistically, changes are hidden in neatly written characters. 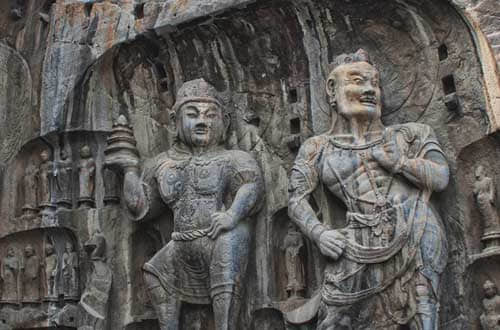 During 493 CE, to sinicize the state, Emperor Xiaowen of the Northern Wei Dynasty, who supported the carving of the Yungang Grottoes, moved the capital from Ping Cheng (present-day Datong) to Luoyang. The Guyang Cave, known as the first cave temple of the state among the Longmen group was excavated after the move from the capital. Over 1,000 niches and 800 inscriptions are contained within the cave, making it one of the richest at Longmen, and significant reflection of the late Northern Wei style for both sculpting and writing. The central statues of Sakyamuni Buddha and Bodhisattvas (those on the path to enlightenment) each take on a somber appearance with a slender silhouette, contrasting the earlier, broad-shouldered style found at Yungang. Inscriptions attached to statues within Guyang Cave include 19 of the 20 inscriptions designated as exemplary forms of the Northern Wei calligraphy. 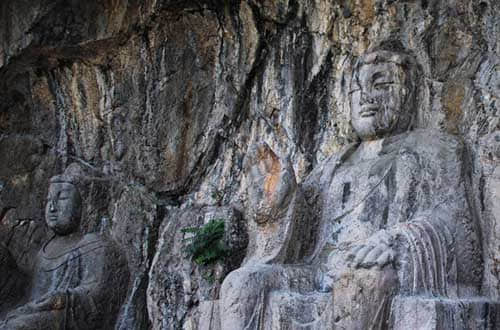 In 618 CE, the Tang Dynasty was founded. It is considered the golden age of Chinese arts and culture. During this time, the ascetic style of the Northern Wei gave way to a realistic, dramatic, and intricate style in which some 60% of all grottoes at Longmen were formed. The largest and most magnificent of these is unquestionably the Fengxiansi Cave.

From 907-960 CE, the construction of caves once again emerged during this period.

From 960 to 1279 CE, during the Song Dynasty, new caves were carved and wooden structures were built to protect the Vairocana statue.

From 1368-1644 during the Ming Dynasty, renovations began in the Huijian Cave.

In 1750 CE, Emperor Qianlong of the Qing Dynasty paid a visit and wrote two poems to praise the beautiful scenery of Longmen. These two poems were inscribed on a stone tablet at Longmen. 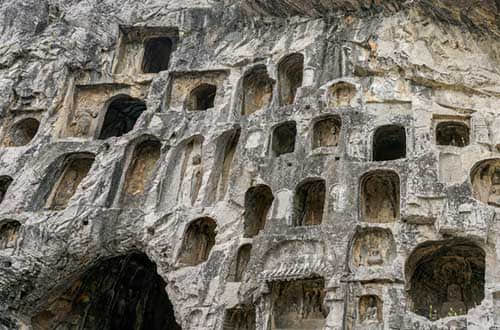 In the early 1900s, during the Boxer Rebellion, the Eight-Nation Alliance (the European powers plus the US and Japan) sent forces to China to capture Beijing. Dressed as a peasant Emperor Guangxu, Empress Dowager Cixi, Empress Longyu, and along with some of his court officials fled Beijing. The Allied Powers sent a conciliatory message to Cixi in Xi'an, offering to make peace. The Allies would allow Cixi to continue her rule, on her way back to Beijing from Xi'an,. They spend 9 days in Luoyang and toured Longmen, where she ordered the renovation of the Guyang Cave. It is rumored that she demanded the Sakyamuni statue to be changed to the image of Lao Jun (a Taoist god) and the cave to be renamed Lao Jun Cave.

In 1961, Longmen grottoes were listed as part of the priority group of heritage sites to be placed under-emphasis by the State Council.

In 2000, it was listed as a UNESCO World Heritage Site.

What to see at Longmen Grottoes

Guyang Cave is traced back to the reign of Emperor Xiaowen who carve it in memory of his grandmother Dowager Feng. Over 1,000 niches and 800 inscriptions can be found in the cave, making it one of the richest at Longmen, and significant reflection of the late Northern Wei style sculpting and writing. The central statues of Sakyamuni Buddha and Bodhisattvas (those on the path to enlightenment) each take on a somber appearance and a slender silhouette, contrasting the earlier, broad-shouldered style found at Yungang. Another treasure is its inscriptions attached to the statues. An outstanding example is the works of “Longmen Ershipin” (龍門二十品) script known as Weibei (魏碑). 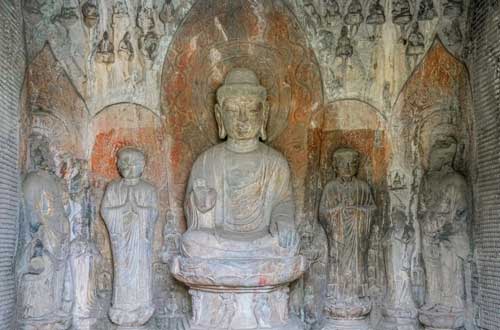 On both walls, is inscriptions of more than 140 medical prescriptions for a wide range of medical problems, including both common ailments and other difficult cases. In the 10th century, a Japanese scholar visited the Longmen Grottoes and copied 95 prescriptions from the Medical Prescription Cave, which he later included in Ishinpo, the Japanese encyclopedia of Chinese medicine.

Carved shortly after the Northern Wei capital was moved to Luoyang, was donated by Emperor Xuanwu in honor of his father, Emperor Xiaowen, and mother, Empress Wenzhao. Unlike the figures in the Guyang Cave, those in the Binyang Caves are of an earlier Northern Wei style, closer to that found at Yungang Grottoes. Work began on Yaofang Cave during the Northern Wei and Tang dynasties and came to include the engraving of 140 Tang era medical prescriptions – practical remedies to ailments ranging from cholera to hysteria. These treatments, which spread to Japan in the 10th century CE, reveals the degree to which medical science advanced during the Tang Dynasty. 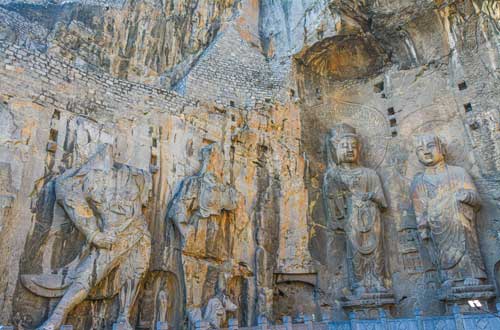 Wanfo Cave was completed shortly after the completion of Fengxiansi Cave and created in the honor of Emperor Gaozong and Empress Wu Zetian. It contains 15,000 small, sitting Buddha figures carved within the vast grids of tiny niches that blanket several walls. Prominent patrons of the cave included a female court official and a palace chapel nun. The largest grotto on the east side, Kanjingsi Cave, unlike many other large caves, lacks the grouping of large, carved Buddhist statues. In their place is a procession of life-sized Arhats (those far advanced along the path to enlightenment) stretching around the perimeter of the cave, each with a unique expression, carved in relief in the evocative and highly-detailed style found at other Tang era grottoes.

Carved into the center of the rear wall of the cave is a colossal statue of Vairocana Buddha. Given the quiet elegance and slight smile of the figure, it has been referred to as the "Mona Lisa of the East." The Vairocana statue is flanked by a set of disciples and Bodhisattvas, as well a set of heavenly kings and guardians carved into the sidewalls, forming a semicircle. Given that each statue is remarkedly different but yet equally expressive personality; standing at the center of the group, facing the Buddha, is truly an awe-inspiring experience. Completed in 675 CE, the grotto was donated by Emperor Gaozong and Empress Wu Zetian (the first and only empress regnant in China) to honor their ancestors.

Other highlights in the vicinity of the Longmen Grottoes

About 55 km from Luoyang, they were carved in the early 6th century to commemorate the Northern Wei Emperor Xiaowen (r. 471-499 CE) who had selected the site for the establishment of the Xixuan Temple during his reign. New caves were added during the Tang Dynasty (618-907 CE), like the 1000 Buddhas cave to the east of the temple.

The first Buddhist temple in China built by Emperor Ming of the Eastern Han Dynasty in 68 CE. It is named after the white horse carrying the Buddhist sutras and figurines back to China, led by two great Indian monks. 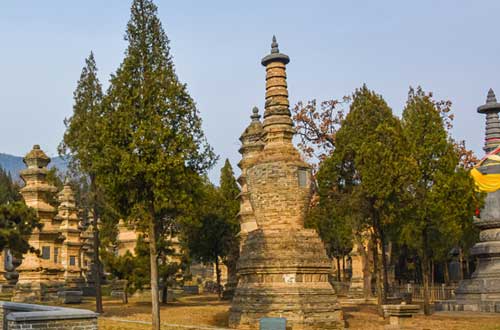 Famously known around the world, Shaolin temple was built in 495 CE by Emperor Xiaowen, to welcome the Indian Monk Buddhabhadra, or Batuo in Chinese. After Batuo, another Indian monk Damo (Bodhidharma) visited. Damo found that the monks in the Shaolin temple did not have the stamina for long hours of meditation. He developed a set of exercises that later became the foundation of the specialized interpretation of martial arts at Shaolin. Martial arts were widespread in China and many of the monks were once soldiers. The Shaolin temple also welcomed other kungfu masters to teach or learn from the monks. With the existing martial arts exercises combined with Bodhidharma's teachings created the Shaolin Kung Fu.

How to fit Longmen Grottoes in my tour to China?

Longmen Grottoes is located in Luoyang, central China's Henan Province. It is very easy to get there from most cities in China. It takes about1.5 hrs by bullet train from Xi'an to Luoyang, and can be an additional stop to enhance your China experience.