Gallery of Sculptures from the East

Just a few miles south of the Silk Road in Gansu Province, lies one of the most spectacular artistic treasure of China's past – the Maiji Mountain Grottoes, a series of 194 caves cut into the side of a rock face, adorned with more than 10,632 sculptures and over 1,300 square meters of murals. Like a honeycomb, the rock face rises in a steep ascent, with hundreds of grottoes connected by a series of constructed walkways clinging to the sheer cliff. "Maiji" in Chinese means wheat stack due to its resemblance to the shape of a stack of wheat. 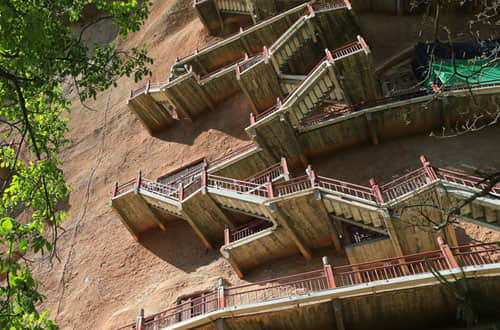 The sculptures and murals housed in the Maijishan caves provide us with an understanding of Chinese sculptures, paintings, and architecture as well as traces the development of Buddhism. The earliest examples reflect syncretized forms of Indian, Central Asia, and Chinese styles. Gradually, the form evolved to reflect a more native Chinese style as the artists of Maijishan integrated their creativity and imagination with exotic art styles that produced sculptures and murals with a more indigenous flavor resulting in a transitional phase of Chinese Buddhist art that can be seen here.

The later Qin Dynasty (384-417 CE): Written records and inscriptions from stone tablets reveal the Maiji Mountain Grottoes were first carved from 384 to 417 CE (the Later Qin of the Sixteen Kingdoms in North China) by "digging the mountains to make tens of thousands of statues on cliff surfaces and turning cliffs into Buddha pavilions". The second emperor of later Qin was Yao Xing(366–416CE). He was an avid Buddhist, and it was during his reign that Buddhism first received official state support in China. He carved the mountains and made 1,000 cliffs and 10,000 images, turning the cliff into halls. He forced the famous Sutra translator Kumarajiva (344-413 CE) to move to Chang'an (present-day Xi'an) in 401 CE. Kumarajiva translated a lot of Buddhism Sutra and helped the spread of Buddhism in China.

The cave 74 and cave 78 were built during this period. Cave 78 contains a remarkable giant size image of Buddha in Vajra-Paryankasana posture with the raised right hand in Abhaya Mudra (hand pose that grants fearlessness). Traces of earlier construction and influence of Indian and Central Asian styles can be easily discerned in this cave. 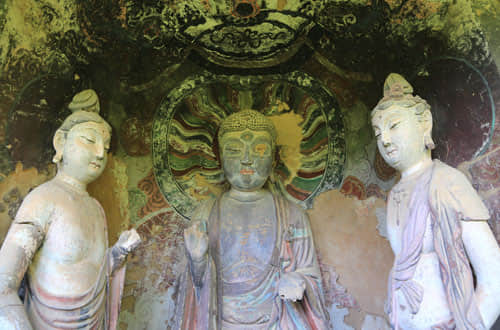 Northern Wei (386–535 CE): Saw the peak of construction at Maijishan, about 50% of the sculptures were constructed during this period. The statues made in the early years of the Northern Wei Dynasty embodied the Pingcheng Model (also known as Yungang Model) of China's Buddhist grottoes and the implications from the Indian art of Gandhara. The local features of Buddhist statue making art in ancient Qinzhou (present-day Tianshui) region are also notable. The simple and solemn figure of a seated Buddha in cave 148 manifests an earlier phase of the Northern Wei style. The dominating great standing Buddha and his attending Bodhisattva on the western cliff in cave 98 also belong to the Northern Wei period.

Representations of this style can be seen in numerous caves such as 60 and 147 as well as many others. Among the most notable is cave no.44 which depicts an exquisite image of Buddha with a lofty bun of curly hair, high nose, long ears, and a gracious smiling face that looks calm and indifferent to the outside world. His arched eyebrows and half-closed downward-looking eyes create an expression of calm serenity. This sculpture represents the Western Wei style in its elegant posture and dignified appearance.

Northern Zhou (557–581): The new style developed during the Northern Zhou period and sculptures took a form that was plump and round. Cave 54 illustrates a drift in style from Western Wei to Northern Zhou. The melding of these two styles is apparent in the depiction of the seated Buddha and attending Bodhisattvas in this niche. Cave no.62 is a clear example of the Northern Zhou style with the plump image of a seated Buddha with a pleasant smile and intimate gesture. 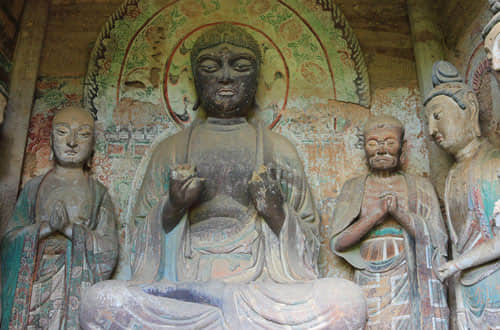 Sui (581–618 CE): Composes of stiffly posed figures are replaced by more liquid tribhanga stances. The Sui and Tang periods witnessed an exalted height in the sculptural activity. Substantial remains of these periods have survived in cave 5 where the images of the Buddha reflect dignity and spiritual luminosity.

The impressive figures of a seated 16 meters tall Buddha and a tall 13 meters attending Bodhisattvas in cave 13 on the eastern cliff were also initially created during the Sui Dynasty. This Grand Buddha image depicted in pralamb-padasana (chaired posture) and flanked by Bodhisattvas present an impression of profound glory.

In 734, a massive earthquake occurred where the middle section of the grottoes collapsed. The devastation resulted in the grottoes being divided into two parts: the western part, and the eastern part. There are 54 caves in the east and 140 caves in the west.

In 1961 , the Maijishan Grottoes were announced as part of the priority group of heritage sites to be placed under-emphasis by the State Council.

In June 2014 , at the 38th World Heritage Site Nomination Conference held in Doha, Qatar, the Maijishan Cave-Temple Complex was inscribed into the World Heritage List as part of the series of sites under “Silk Roads: The Routes Network of Chang'an-Tianshan Corridor”.

The story behind Cave 44 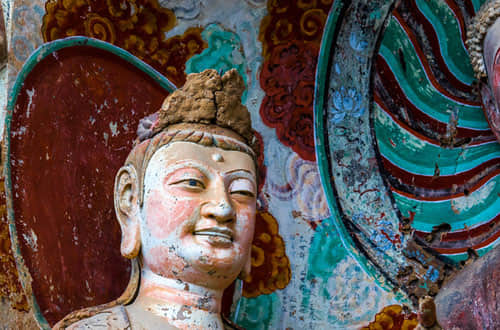 The cave was carved in memory of Queen Yifu of the West Wei Kingdom (535-556). Queen Yifu came from a noble family, her father a high-ranking official, and her mother a princess. At the age of 16, she married Emperor Weiwendi. The Emperor and Queen enjoyed a happy marriage lasting 13 years. The Queen was famous for her modesty, and this made the Emperor love her even more. The Queen was pregnant every year, but only two princes survived. Sadly, the King did not hold the true power of the kingdom, as it rested in the hands of one of his generals - General YuWen Tai. The kingdom came under constant attack at its borders, and the general forced the King to marry a princess from a neighboring border to make peace with the border tribes. Reluctantly, the King dethroned his Queen and forced her to become a nun to legitimize his marriage to the princess. However, the princess was not satisfied and was overwhelmed with jealousy by the King's love for the former Queen. She demanded the death of the Queen and helped raiders to launch another attack at the border, threatening the kingdom. The King was distraught, and believing he had no choice, sentenced his former Queen to death. Instead, she committed suicide to bring peace to the kingdom. 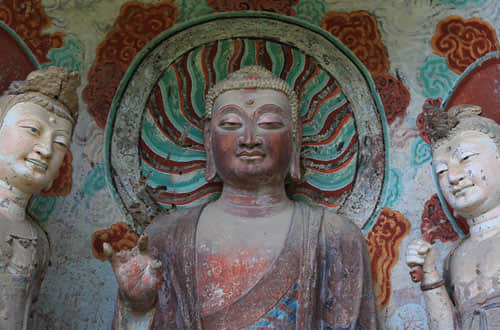 This cave, No. 43 in the Maijishan Grottoes, is her tomb, and another cave next to her tomb was carved out by her son to honor her. It is said that the Buddha statue enshrined in this cave bears the face of the Queen. Indeed, the Buddha image in this cave does carry a hint of femininity—the aesthetic flair invokes a middle-aged woman, with a smile full of motherly love. The image is known to resemble an Asian version of the Mona Lisa, due to her smile. Many cave temples follow this feminine presentation of the Buddha, which is called the “Yifu style,” named after the Queen.

Other Highlights in the vicinity of Maijishan Grottoes

About 15km from Maijishan Grottoes, composes of three cliffs, five peaks, and six temples. Many scholars lived in seclusion in the area, where they built temples and carved grottoes. A real hidden gem!

Built from 1589 to 1615 during the Ming Dynasty, is well preserved with a mixture of the traditional Han culture in the central mainland, and local art from northwest China.

Located in Fuxi Road, Qinzhou District, Tianshui City, is the largest and best-preserved temple in honor of Fuxi, the first mythical emperor of China. The temple was completed in the Ming Dynasty (1368-1644 CE) and was previously known as the Taihao Palace or Renzong Temple.

How can I fit Maijishan Grottoes into our tour to China?