Young photographers show great enthusiasm for Xiamen. So do those foodies. The various gourmet desserts, the rich peanut soup, sweet grass jelly, and tasty satay noodles are all delicious. As you enter an obscure lane, the sizzling sound of barbecue from the food stalls, the alluring aroma of Glutinous Rice Dumplings, the mesmerizing sight of the spicy Frozen Siphon Worm and the array of spring rolls filled with diverse fillings are all evidence of authentic local delicacies. 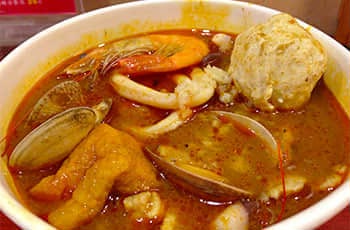 These noodles are sold all over Xiamen. The essence of sate noodles is the soup, which is made of slow boiled sha cha sauce. As for the noodles, the South Fujian style you mian is chosen. Boil you mian and greens and fish them out of the boiling water straight into the bowl. Pour the hot sha cha soup into the bowl. Finally, you can add seasonings, soy products, large intestines, rice blood sausage, pig kidney pieces (yao hua, literarily the organ cut into a flower shape), and even a small spoonful of spicy oil. Now you can enjoy the spicy and tasty noodles.

The Tusun is actually a seafood that looks like “sun” (asparagus). Its rich jelly is from an annelid worm named sandworm or lugworm. The 6-9 cm creatures are boiled first. Once all of the collagen is dissolved in the water, the liquid will be cooled into jelly. 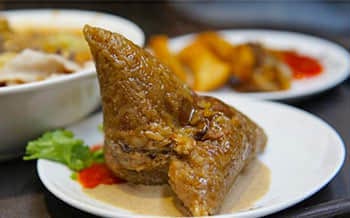 The ingredients include shiitake mushrooms, dried peeled shrimps, diced sweet potatoes, chestnuts, pork (or chicken) and glutinous rice. Soak the glutinous rice and dry it. Stir-fry it with thick gravy and shallot oil until it is dry and loose. Mix it with braised pork and raw chestnuts. Wrap it with bamboo leaves and boil it until it is soft. 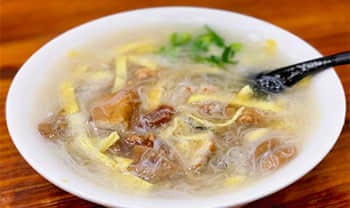 This dish is made from fine noodles and sweet potato powder. Heat the water until it boils. Then put into the potato noodles and seasonings. 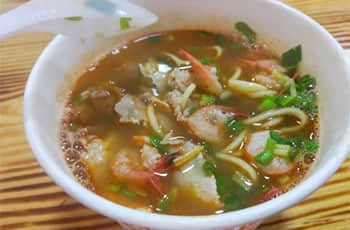 The basic ingredients are shrimps and noodles. The first thing is to make the essence of the soup. Peel the shrimps and boil them. Take out the shrimps and use the soup to boil the peeled shrimp shells. Sieve all the shells and mash them. Boil them again with icing sugar. Then mix it with boiled pig bone soup, shallots and garlic. This is the authentic soup for the noodles. Prawns, peeled shrimps, squid, pig liver, duck heart, duck tendon, duck intestines, blood tofu, fish balls, dried tofu, etc. can be added into the noodles. Sometimes, pepper powder is also a seasoning.

The brown colored porridge is made with the gravy of braised duck. Actually, all of the duck parts can be added into the gruel, which is reminiscent of Nanjing Duck blood and vermicelli soup. 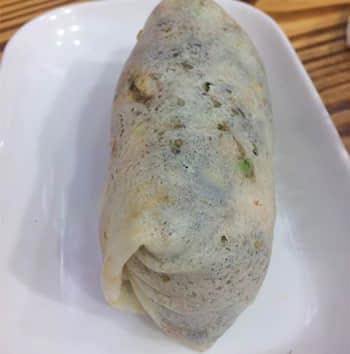 Spring rolls are also known as Bo Bing (thin pancakes) and Run Bing. According to a saying, a madam invented such spring rolls to help her husband, a diligent civil officer, to focus on his job. For the stuffing, people would usually choose fish, pork, shrimp, bamboo shoots, bean sprouts, dried beans, egg silk, jellyfish, carrots, etc., Folks also call it beauty thin pancake. Characteristics: it is non-fried food which is rich in fillings 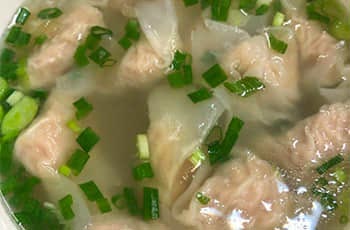 A Wonton is called Bian Shi in Fujian. The thinly-wrapped wonton is floating in the soup like a jellyfish. It is one of the foods that you should avoid using chopsticks to eat. When you scoop one up, you can have a really nice bite. Its filling is very delicate as it is made of well hammered chopped meat, shiitake mushrooms, water-chestnuts, mashed shallots and ginger. The soup head is mostly broth or broth with seaweed, dried shrimps and diced shallots. 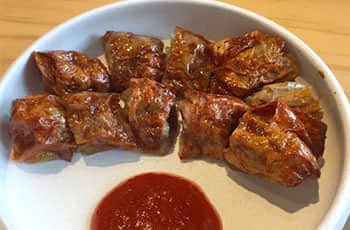 The stylish South Fujian delicacy Wu Tiao Xiang was first made in Zhangzhou, Fujian. Diced pork, silver pomfret (Pampus argenteus,a species of Butterfish), water chestnut and scallions are fried in the pan until they turn brown. Various sauces are considered the best match for the sectioned Wu Tiao Xiang. Some people choose to drink liquor with it. 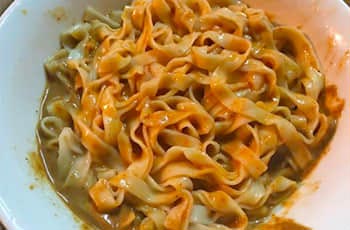 These hand-made fine noodles are mixed with peanut sauce and local sweet chili sauce. In general, the small shop that offers good wontons is also good at mixed noodles. 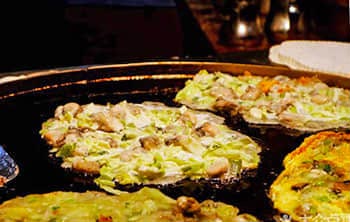 You may find lots of oysters on the giant stones near seashore. They say that people who live near the sea, live on the sea. The oyster omelet helpings are very generous. Eggs, leeks, sweet potato powder and minced garlic are well mixed first. Fry the mix liquid in the pan until both sides are crisp and yellow. Mashed garlic, coriander, sha cha sauce, chili sauce, etc., are a match for this dish. 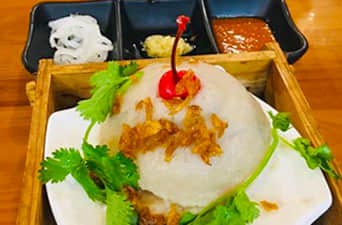 This dish nearly falls into the category of forgotten food. Its complicated process baffles many food shops. Pork, shrimps, shiitake mushrooms, winter bamboo shoots, etc. are stuffed in the wrapper. The steamed yubao dumpling is tasty with sauce. Characteristics: the contents are various.

Dachang is made of glutinous rice and Xiaochang is the sausage. Cut open the Dachang and stuff in the Xiaochang and other sauces. Peanuts and shallots can also be stuffed. Characteristics: it is fragrant and crisp 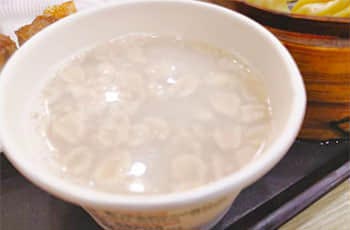 The peanuts' thin skin has to be removed first. Then dry them and soak them for a long time. Boil the prepared peanuts until a thick soup is made. A lot of peanuts are floating in the soup. You can choose to add an egg to it.

Characteristics: Put chai ko has a crystal clear layer. It tastes refreshing and sweet. It is chewy but it does not stick to your teeth.
Recommendation: Zhongshan Road Tiger City or other dessert shops 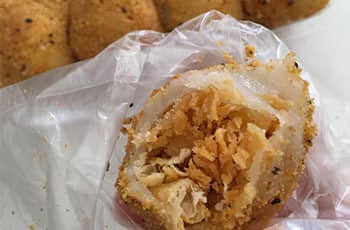 Unlike glutinous rice cake in Sichuan, Maci is made from glutinous rice, peanut powder, white sugar and black sesame seeds. It can be where the journey of tastes and flavors begins.

There are actually no shallots in the ingredients. That's weird. (But it does contain shallot oil.) Wrap shallot oil, sugar, pickled radish, peanut squares, dried meat floss (as flossy as coarse cotton or wool), chili sauce, mustard, etc. into small rolls for serving. 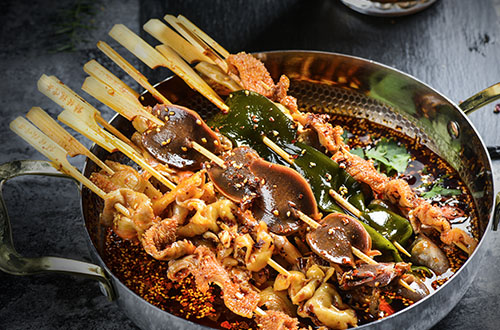 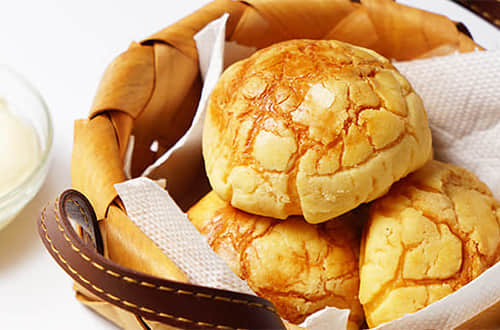 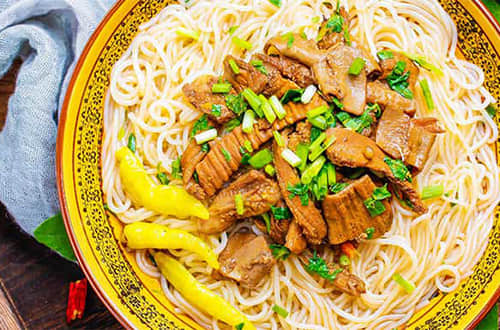