Interesting and Fun Facts about Trains in China

Travel in China by rail is indispensable for most journeys. Train not only plays a pivotal role in China's public transportation but also bring unexpected wonderful sceneries and glimpses of local life on the journey. It is also an achievement of the industrial revolution to create a lot of engineering marvels, and vital to the Chinese economy. Here we list some of the facts that train fans would be interested to learn. 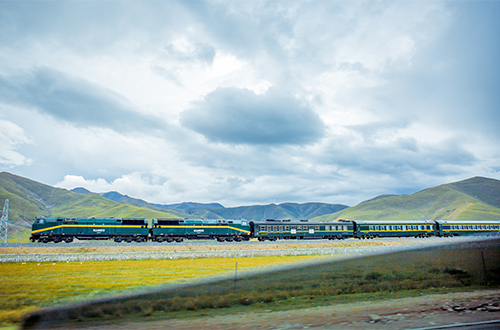 The entire distance is approximately 4,980km, and the one-way journey is more than 53 hours, passing through8 provinces across China. It is the forth longest railway in the world. The price of a hard seat ticket is less than 500 RMB, and a hard sleeper is not more than 1000 RMB.

Along the journey to Lhasa, it is usual for passengers to experience altitude sickness, due to the low level of oxygen. Therefore, every passenger needs to fill in a health card, understand the condition of high altitude, and adapt to plateau-climate. If visitors are not in sound health, it is not recommended to take this train. This journey will en-route to places with high altitude, the highest reaching 4,500m. Passengers not only can admire the magnificent scenery but also have an opportunity to meet friends of other ethnic groups.

2. The Highest Railway in China: the Qinghai-Tibet Railway

This is the Qinghai-Tibet Railway that has a section of 965km at an altitude above 4,000m, and the highest point of the roadbed is at an altitude of 5,072m in a pass of Tanggula Mountains. It is also the longest railway across the plateau, alpine and hypoxia areas, and continuous permafrost.

The China-made CIT500 is currently the fastest train in the world. “CIT” means Comprehensive Inspection Train. It is a special type of modified train for testing and examining high-speed rails, overhead wires and train design itself.

The speed of the bullet train is above 200km/h, and the speed of CRH (China Railway High Speed) is about 350km/h. The CIT500 high-speed train, made by China South Locomotive and Rolling Stock Co. Ltd., has an experimental speed of 605km/h, breaking the current world record of 574.8km/h from a French High-Speed Train.

Kaiping Tramway and Imperial Railways are often described as the first standard gauge railway for freight to be built by the Chinese Government. Meanwhile constructing the railway, Kaiping Mining Bureau, secretly manufactured the first set of the locomotive of China. The railway was completed with the assistance of British engineering C. W. Kinder and opened in 1881, running 7.5km long. This was the beginning of the building of China's railway.

5. The First Railway Designed and Built by Chinese: the Beijing-Zhangjiakou Railway

This was the Beijing-Zhangjiakou Railway built from 1905 to 1909. Zhan Tianyou was the chief engineer responsible for the railway construction. The construction of the railway was considered impossible at the time without foreign assistance. Zhan overcame a series of problems in terrain and shortage of train power by building a zigzag railway that climbed upward. Now, the first railway designed and built by the Chinese is more than 100-years-old, which has been upgraded and continues to play an important role in transportation.

Chinese longest freight train has 208 carriages and is 2,600m long, and operates on the coal line Datong - Qianhuangdao Railway. The longest passenger train is T15/T16 on the Beijing-Guangzhou Railway with 25 carriages and more than 600m. 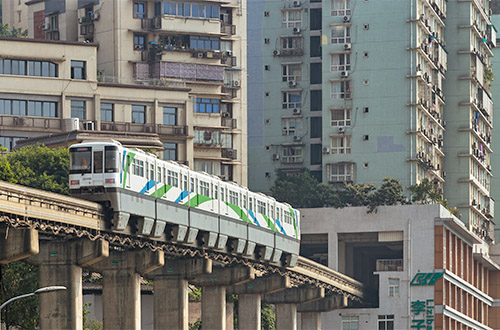 Chongqing Rail Transit Line 2 at Liziba Metro Station passes through a 19-story residential building. It was built in March 2004, and the station is located on the 6-7 floors of the No. 39 Commercial and Residential Building in Liziba Main Street. Architects and city planners were creative in making the complex landform of the Chongqing “Mountain City” co-exist with this unique scene of light rail.

Built-in 1956, the Genhe Railway Station is located in the north of Hulunbuir City of Inner Mongolia. Two trains pass by this station each day from Feb, 11, 2020. The climate of Genhe region is cold and humid, and freezing period is more than 210 days. The annual average temperature is -5.3℃ (22.46°F), the lowest reaching -56℃ (-68.8°F). The extreme climate makes Genhe Station famous as the coldest train station in China. 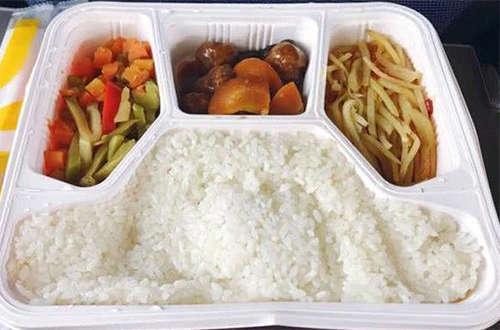 When traveling on a Chinese train, the foods are provided from the dining car, the food trollies, and platform vendors. The fare of the food is not included in the train ticket. Heat packed meal served in dining cars is very bland, and the prices range from 15-45 RMB. You also can order a dish on the menu, but are more expensive than what you will pay in a small restaurant.

Train trolleys usually sell some fruits, snacks, instant noodles, and bottled or can beverages. Each carriage has boiling water to make your own tea or coffee, and instant noodles. Bring your own drink sachets.

China has 74,438 kilometers, or 46,235 miles of train track. China's railway ministry runs the world's second-largest rail network after the US.

11. The Fast Development of Rail Network in a Short Period

China's Railways Ministry controls every stage of train manufacturing, from design through to production and operation. A strong central government makes this project progress faster than in other countries. With a huge population in the country, it meets the needs of a growing number of passengers. As reported, in the 2011-2015 period, the extensive railway network carried 10.6 billion passengers and 15.5 billion tonnes of goods, up 49.1 percent and 13.6 percent from the previous five years.

12. The Most Profitable High-speed Railway

Railways are vital to the Chinese economy. China moves 54 percent of domestic trade by train. Among all the high-speed railways in China, the Beijing-Shanghai High-Speed Railway is the most lucrative railway line. It is the busiest line to transit about 130,000 people at the Beijing South Railway every day. That's equal to the population of a small town. CGTN reported that this line transported a total of 215 million passengers in 2019. This most profitable high-speed rail line remained profitable in 2020 despite the COVID-19 epidemic's hard hit on the transport industry.