The lure of powerful machinery can be an addictive draw for many photographers. Locomotives, commuter trains, and railway landscapes, together with various natural scenery or en-route landscapes of cities and towns, are forever an intoxicating vision for the passionate photographers and complex machinery lovers. 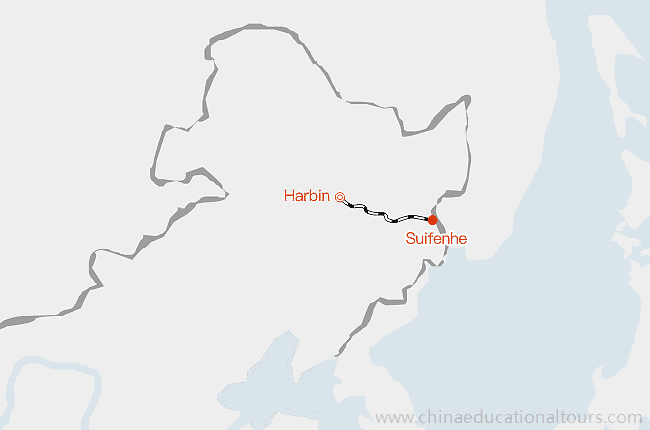 The Binsui Railway is a double-track electrified trunk railway in northeastern China between Harbin and Suifenhe on the Russian border. It still maintains the original appearance from the past century, such as Russian style tunnels, stations, and villages. The vast northern land scenery of China as a background forms a unique railway sight.

In the Yimianpo section, you will capture a continuous arch bridge in the Russian style. It is a firm and elegant stone bridge, showing the beauty of power and art.

From Yabuli to Hengdaohezi, the railway goes across the Zhangguangcailing. In the section of Hengdaohezi, you can shoot a disused fan-shaped garage, a Russian style station in use, and the well-preserved Russian style town which was reputedly “a town pulled by a train”. 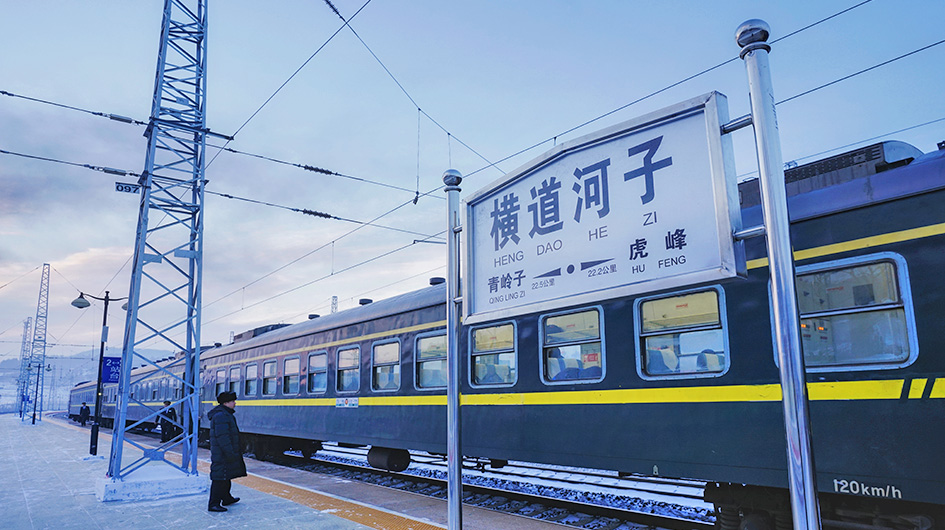 From Hengdaohezi, the railway enters Linhai City. The mountains here are the stretch section of the Mountain Zhangguangcailing Range which is surrounded by lush and colorful plants. With the railway going through valleys and rivers, you can enjoy the stunning views, especially in autumn and winter.

The last and important spot is Suifenhe Railway Station. The station was built in 1902 and later reconstructed while still keeping the overall structure and its original style.

2. Binzhou Railway (From Harbin to Manzhouli) 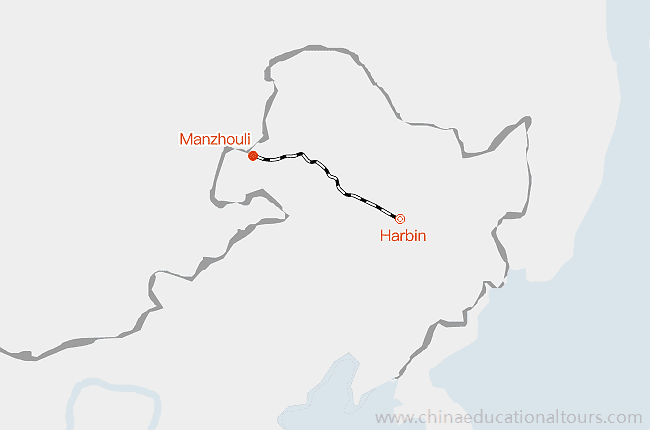 The Binzhou Railway is known as the Harbin-Manzhouli railway, and is a double-track electrified trunk railway in northeastern China. The 964km rail line runs through Heilongjiang Province and Hulunbuir grasslands, on its way across the forests of the Greater Khingan range.

The train traverses various landscapes from the city to the oilfield, as well as fertile fields and wetlands. In Harbin, the Songhua River Bridge was originally built by Russians in the 1900s. It is the oldest railway bridge on the Songhua River, and the first cross-river bridge in the city. It is now open to visitors. Here you can visit the historical site and walk on the old railway bridge to watch the new one alongside. If you are lucky, you will snap some pictures of trains running across the new bridge.

The Ang’angxi Station is a grand railway hub consisting of several complex railway overpasses. Visitors can enjoy the Russian style buildings, such as the footbridge, station, and railway station buildings.

Driving out to Heilongjiang Province, you will come to the Zhalantun Railway Station which is the start of a wonderful journey across the Greater Khingan range. The railway runs through the Greater Khingan range, and as the mountains become more precipitous and narrow, it winds its way along the ranges and valleys. In the autumn, the scenery is striking with the larches and the birches covering the endless mountains in golden colors.

From the Balin Station to the Lamashan Station, onto Lama Mountain, photos taken from the mountain as the train snakes its way through the countryside will give you a desirable effect. Leaving the Greater Khingan range, the train will go on to the Hulunbuir grasslands.

You will see the train run through green grasslands, rivers and lakes, and come finally to the Manzhouli Station. 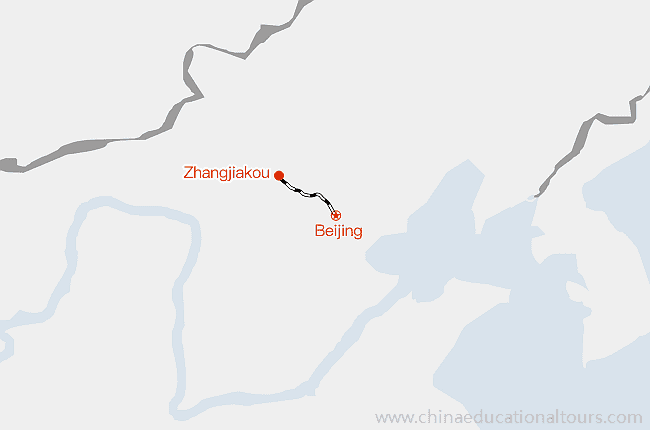 The Jingzhang Railway or the Beijing-Zhangjiakou Railway is China’s first railway that has been designed and built solely by Chinese. It starts from Beijing to Zhangjiakou via Juyongguan, Badaling and Guishuihe Bridge.

The chief engineer is Zhan Tianyou who is known as the “Father of China’s Railroad” because he is responsible for the construction of Jingzhang Railway. It is believed that the start was the Xizhimen Station. People can find the old station buildings, overpass, and garage, which are completely preserved.

When the train passes Nankou Station, it comes to the Guangou Section which is a wonderful part throughout this line. The mountains stretch on both sides, and with the rugged Great Wall, rolling hills and thick forest, this railway presents the beautiful scenery of the railway combined with Great Wall perfectly.

Go on the journey, it will lead to Juyong Pass. The railway takes a large bend through the Juyong Pass, and there are peach and apricot blossoms covering the mountains with magenta color every spring.

Passing through the Great Wall, it arrives at the Qinglongqiao Railway Station, the terminal point of the Guangou Section. This station with its industrial heritage still maintains the original appearance. Functioning as a small museum, it collects some artifacts including oil lamps, and the railway junction and shunting equipment.

Not far from Badaling, there is the Guishui River Bridge in Yanqing District. Photographers can capture wonderful pictures in that setting of the wide Guishui River and rugged mountains in the distance, as the train goes through the steel truss bridge.

4. The Qingzang Railway – the world’s highest railway and engineering wonder 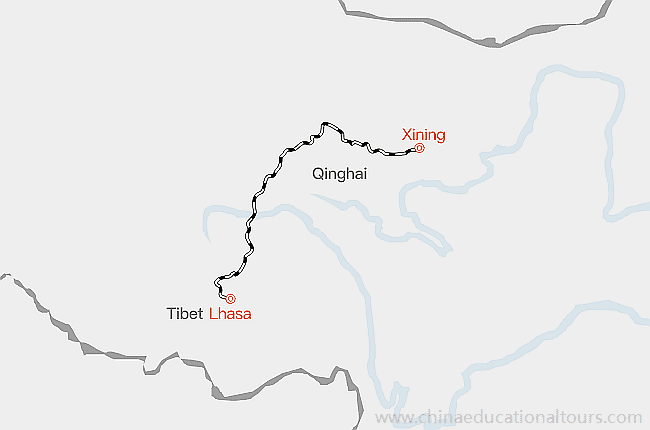 The Qingzang Railway, also known as Qinghai-Tibet Railway, is the world’s highest railway that connects Xining, Qinghai Province, to Lhasa, in Tibet Autonomous Region in China. Reputed as “the sky road”, the railway itself is a great wonder. The breathtaking scenery gives additional attraction to the miracle rail-track.

Starting from Xining Railway Station, the Qinghai-Tibet train goes through Huangshui Valley and arrives at Qinghai Lake, which is the first wonderful landscape en-route. The train runs along beside the Qinghai Lake for about 1 hour. Watch the different landscapes as the view changes, and notice the clear water, precipitous mountains, vast desert, and boundless grassland. The moving train passes by the wide, blue lake that forms an impressive picture.

The halted Guanjiao Spiral was the most beautiful sight on the railway. The complicated spiral was built on both sides of Guanjiao Mountain, and can be comparable to the World Cultural Heritage Albula Railway, and has become a classic work in the history of architecture. (The spiral was replaced by a 32km long tunnel in 2014.)

Across the Guanjiao Mountain, the railway enters the Qaidam Basin. There is a branch leading to Chaka Salt Lake. The 600mm (1ft 11 5⁄8 in) gauge railway for salt transportation has been preserved, but now it works as a tourist train and leads visitors on a tour of the salt lake to experience a unique railway trip. 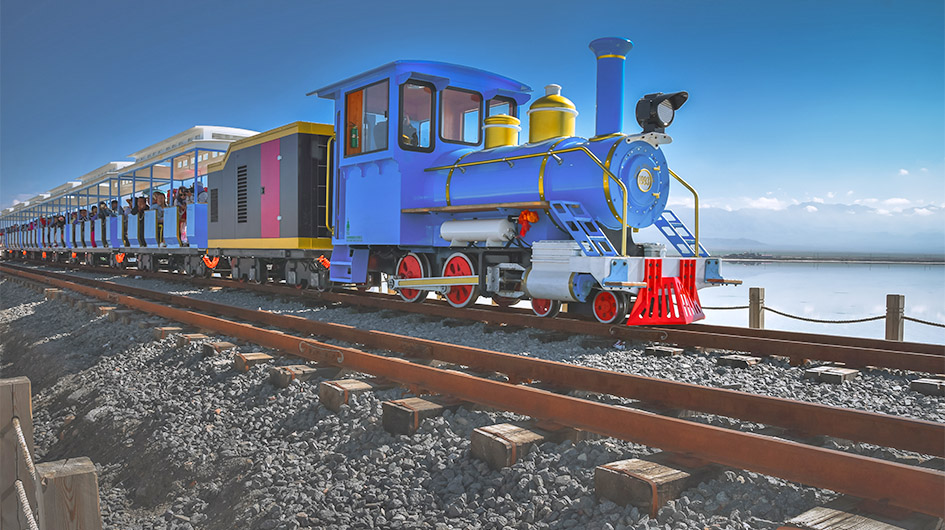 As the train keeps moving up, it goes through the stunning Gobi desert of Golmud, then arrives in the Kunlun Mountains. The train drives at the foot of Yuzhu Peak. In the summer, you will see that Yuzhu Peak is snowcapped while yellow rapeseed flowers bloom at the foot of mountains. Shortly after passing Yuzhu Peak, the train goes out to the Wangkun Station, and then drives to the Sanchahe Great Bridge. This is the highest bridge in the Qingzang Railway, as it has 20 towering piers and the undulating Kunlun Mountains as background. A stunning picture is when the train is roaring by the bridge under the blue sky.

Next, the train enters the well-renowned Kekexili Nature Reserve, the least populated and most isolated region in the Qinghai-Tibet Plateau, which is home to a lot of wildlife such as the Tibetan antelope and wild yak.

The train heads for the station of Tuotuo He River, where there is an abundance of natural scenery and cultural heritage. After entering Tibet, the different natural landscapes unfold. Freshwater Tsonag Lake is like a piece of jade decorated with snowy mountains. The train threads between snow-capped peaks and valleys, vast grassland and marvelous Tibetan houses all the way to Lhasa. 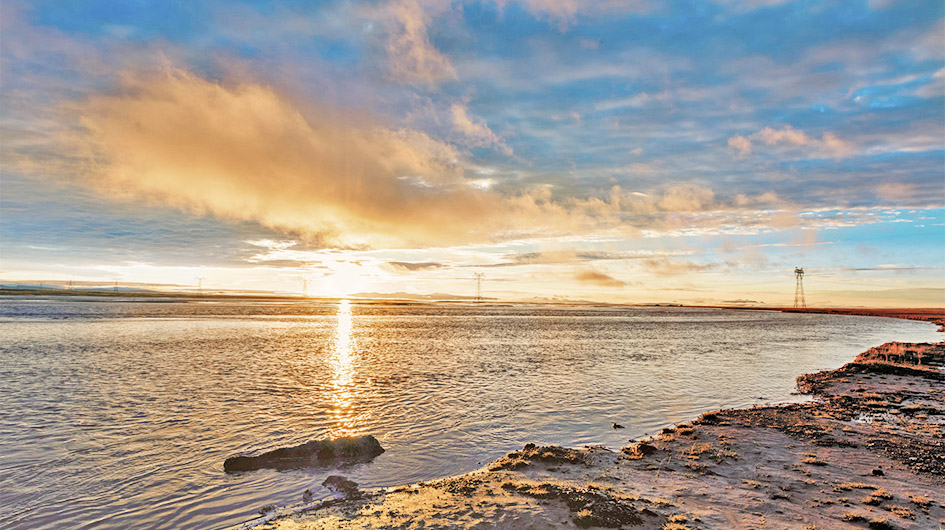 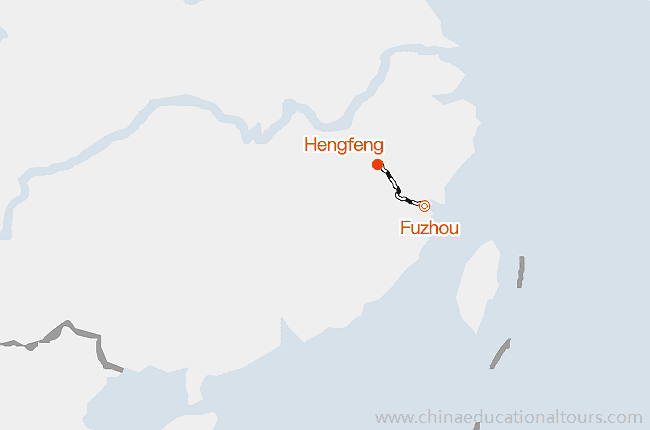 The Hengfeng-Fuzhou Railway starts from Hengfeng Station in Shangrao City, Jiangxi Province, and goes to Fuzhou Station in Fujian Province. Along the way, there is great scenery including the Wuyi Mountains scenery and the clear water of the Min River.

The journey begins from the Wuyi Mountains, and the first iconic element is Chepan Bridge, a great bend in the mountain hinterland. The train crosses the Danxia landform that is sandstone and conglomerates. The Hengfeng-Fuzhou Railway runs across Jianxi Water several times, with wonderful scenery changes between bridges and turners.

When the train arrives in Nanping Station, it goes alongside the Min River to Fuzhou City. The broad river is sparkling alongside the railway, and the steep valleys are shaped as if cut with a knife. The railway snakes its way between the mountains and banks. Located in the middle reaches of the Min River, a giant artificial reservoir is surrounded by green mountains with pine trees, and the Gutianxi Bridge lies across the water, which is the most classical section. 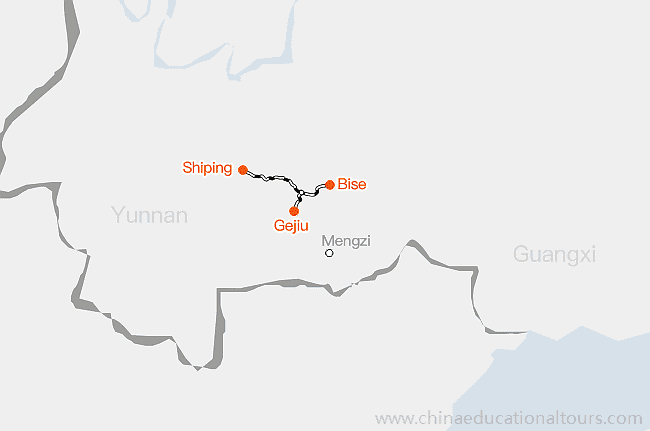 Gebishi Railway launched in 1915 and was a 600mm (1ft 11 5⁄8 in) gauge railway that connected Bise Village, Jijie Town in Xuandian County, Shiping County and Gejiu City in Yunnan. It was the only private railway in China. As the railway halted, the Gebilinping Headquarters was converted into a French restaurant and as such has been preserved. There is an exhibition hall beside it and a short section of 600mm gauge rail has remained.

Jijie Station has an important position in the Gebishi Railway, as it was the transshipment point between the Jijie-Gejiu branches and has remained with a meter-gauge, a station building, a repair workshop, and a bull headed rail. Xianghuiqiao Railway Station is the best preserved, which is the only one Wind and Rain Bridge with combined Chinese style and French style.

The Jianshui Old Train has been running between Lin’an station and Tuanshan station, and serves both Lin’an Town and Mengzi City. On the tourist train, the scenery along the route changes with the different seasons: from vigorous spring flowers, to verdurous summer rice seedlings, and then golden autumn rice delivering the joy of harvest.

The last station is Bisezhai railway station, located on a slope of Caoba Town. Its original appearance has been well protected, including the European with Chinese style station buildings, the stone dwellings, and the railway engine house.

Jiayang Steam Train is a unique heritage in Leshan City of Sichuan Province, where there is an almost 60-year-old railway stretching through the mountains. This narrow-gauge railway, built in 1959, is only 76 cm, and is now the only working steam train in China. It was mainly built for coal transportation from the Jiayang Coal Mine, and the commuting tool for coal miners and local families. Currently, it operates for visitors and will stop at every turn. The small train goes at a speed of 20km/hr. and runs for 80 minutes one way. Visitors can get off the train and go to the viewing platform on the hillside to watch the steam train.

The natural scenery along the rail line is attractive in spring when the rapeseed flowers are in full bloom. The whistling locomotive puffs white smoke and runs through a sea of flowers. 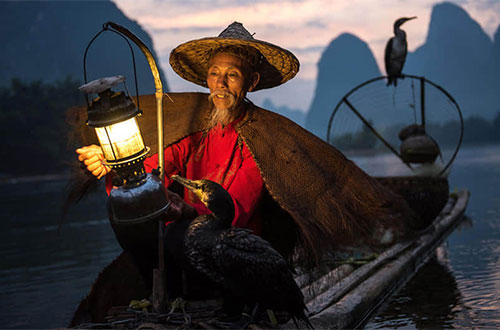 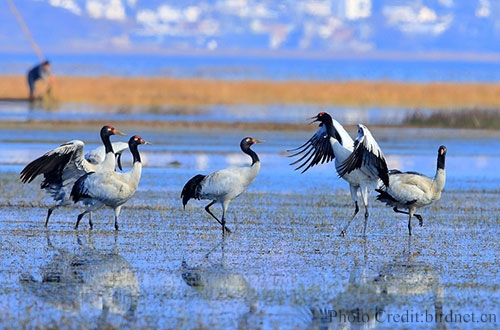 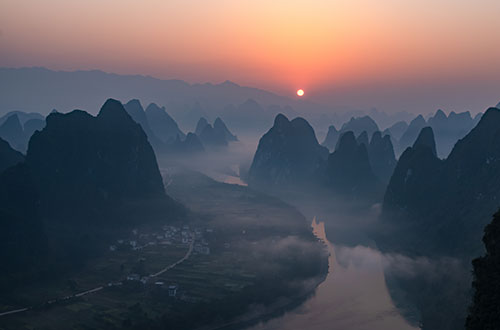