Transportation technology has been the key to our most powerful sociological and teleological growth. After 10 years’ rapid development, China’s high-speed train technology leads the world. By the end of 2020, China has over 5,000 high-speed trains that run daily across China, transporting more than 5 million passengers in less than half the previous time. The length of the high-speed rail line across the country exceeded 37,900 km (23,549 miles), making up more than two-thirds of the world's total. Today, high-speed trains have become the most popular form of transportation in China.

A key development in China was the development and approval in 2004 of A Medium- and Long-Term Railway Plan covering freight and passenger network development to 2020, including the construction of a high-speed railway network. In June 2004, Alstom, Kawasaki Heavy Industries, and Bombardier won the first round of bidding. Siemens later entered with CRH3C in 2005 but was requested to enter into a joint venture with China. 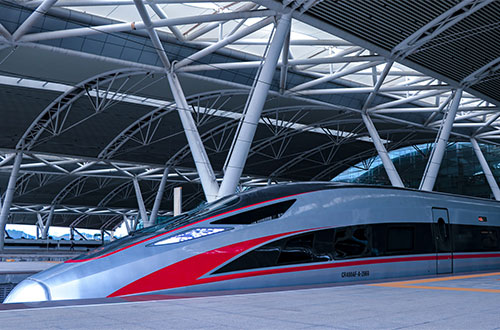 The introduction of high-speed train sets and rolling stocks plus joint ventures helped China to improve the indigenous technology. In 2008, China started to design the CRH3-380A with a speed of 380km/h (236 mph) by China Railway Rolling Stock Corporation (CRRC). In 2010, it was put into operation. It was the first 380km/h (155 mph) high-speed train in which China has full form intellectual property rights. CRRC started to design the CR400AF with a speed of 420 km/h (260 mph) in 2012 and was put into operation in 2017. Furthermore, the CRH380AM-0204 (CIT500) high-speed comprehensive test train, which was designed by CRRC was regarded as the fastest train in the world. The test speed was 605 km/h (376 mph).

China continues to look at ways to improve the innovation of high-speed railway technology. Take the ‘CRH380A innovation project’ as an example, China invested 1 billion RMB (200 million USD) for this project. It brought together a total of 25 Chinese universities, 11 research institutes, and 51 national laboratories and engineering research centers. There were a total of 68 academics, 500 professors, 200 researchers, and more than 10 thousand engineering technicians for this project.

The Central People’s Government set up a Medium- and Long-Term Railway Five-Year Plan.

The Ministry of Railways decided on a technology introduction policy, after the first round of bidding, the CRH trainsets orders are from Bombardier, Kawasaki Heavy Industries and Alstom.

CRH380A began to put into operation.

CR400AF began to put into operation.

China’s diverse climate and vast territory with different landforms required various train types to accommodate the terrain. To meet the different requests, there were two major series of high-speed trains. The first one the CRH series with a speed from 200 to 250 km/h (125-155 mph). This includes CRH1, CRH2, and CRH5, etc. The other one was the indigenous CRH series with a speed from 300—380 km/h (186-236 mph) these were the CRH380A, CRH380B, CRH380C, and CRH380D, etc. In 2017, China Railway Corporation changed the name from CRH380 to CR (China Rejuvenation). These were the CR400AF, CR400BF, and CR400BF–C. There were two types of trainsets which had between 8 and 16 carriages.

4. Interesting Facts About the High-Speed Train

1. How fast does the high-speed train run in China? What’s the average train speed and maximum train speed in China?

2. How many high-speed trains does China have?

3. How much does China's High-Speed Rail Cost?

The construction of the high-speed rail is expensive. The average cost of a double-track high-speed rail line (including signaling, electrification, and other facilities for the train station construction costs approximately US$20 million/km for a 350 km/h (217 mph), about US$17 million for a 250 km/h(155mph) HSR line, and about US$15 million for a 200 km/h(125mph) HSR line.

However, these are at least 40 percent cheaper than the construction costs in Europe. The cost of specific high-speed rail depends on the distance, the terrain, how many tunnels and bridges to be constructed are taken into consideration. We have listed some of the lines below for reference.

4. How long does it take for a bullet train to stop?

Normally, the braking distance depends on the speed of the train. Here are some statistics for reference.

5. What and where is the fastest train in the world

As of 2020, the CRH380AM-0204 (CIT500) is regarded as the fastest train in the world. The CIT500 high-speed train has an experimental speed of 605 km/h (376mph), breaking the current world record of 574.8km/h (356mph) from a French High-Speed Train in 2014. The CIT500 was made by China South Locomotive & Rolling Stock Corporation Limited. “CIT” means Comprehensive Inspection Train. It is a special type of modified train for testing and examining high-speed rails, overhead wires and train design itself.

6. What is the fastest transportation on earth?

The current fastest train is CIT500 and located in China. The experimental speed can reach up to 605 km/h (376mph). However, another transportation that is under construction is the Hyperloop transportation system envisioned by entrepreneur Elon Musk. It’s said that passengers may find themselves shooting through pneumatic tubes at speeds of up to 1200 km/h (760 mph).