The local Hangzhou Cuisines fall into two categories: Hu Shang (literally "on the lake", which derives from Liangzhu Culture about 5000 years ago) and Cheng Xiang (literally meaning "urban", which derives from the South Song Dynasty (1127-1279) when the capital and the population shifted south to escape the invasion by the nomads from beyond the Great Wall in the northern border of the country). Hu Shang features the ingredients of fish, shrimps and poultry. The cooking methods include stir-frying, stewing and sautéing (with a starch extract). The dishes are generally clear, tasty, crisp and tender, for which the chef focuses on retaining the original flavor and juice. Cheng Xiang tends to use meat in the cooking. The cooking methods of so called "Hang Bang Cai" feature steaming, braising, quick-boiling and simmering. The dishes usually have little oil and little sauce. They are savory and fresh-tasting. 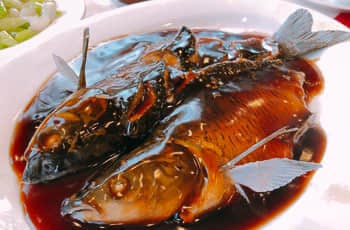 This is a famous dish in Hangzhou. Its long history dates back to the Song Dynasty. The grass carp from the West Lake is the fish used. Prior to cooking, the grass carp is kept in the pool for one day for removal of the dirt and excrement. There is very high restriction for the heat used in the cooking. After the fish is cooked, it is topped with a layer of hot sweet and sour vinegar, and the pectoral fins are erected. 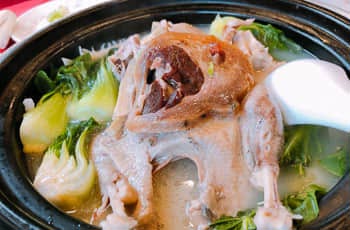 As one of the traditional dishes in Hangzhou, it is made from the "old ducks" (Jiangnan free-range ducks that are raised for more than a year), dried bamboo shoots from Tianmu Mountain and aged ham.

Characteristics: the broth is rich in flavor. It contains proper oil and is not greasy. The meat is easy to chew. It is very appetizing in general.
Recommendation: Zhangsheng Restaurant (Shuangling Road Branch)
Address: No. 77, Shuangling Road, Jianggan District, Hangzhou, Zhejaing Province, China 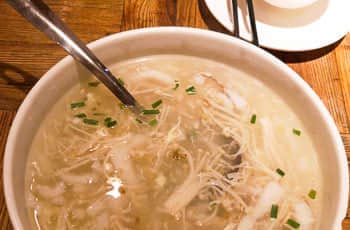 This traditional dish in Hangzhou dates back to the South Song Dynasty. Its history goes back about 800 years. According to historical records, Zhaogou, an Emperor from the Song Dynasty once wandered around the West Lake. A lady who was the fifth sister of a Song Family cooked very good fish chowder. The Emperor ordered the fish chowder and greatly appreciated the dish. The ‘mandarin fish’, as the main ingredient, is steamed first. When the skin and the bones are removed, sliced ham, shiitake mushrooms, cut-off bamboo shoots and chicken soup are added into the pot for cooking. The finished dish is like a crab chowder, and it is also called "Sai Xie Geng (better than the crab chowder)" 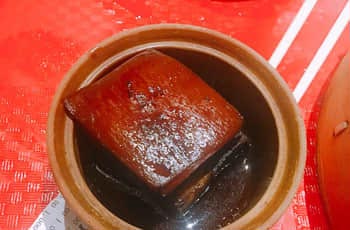 Dongpo Pork is a delicious dish that features good color, aroma and taste. In the history of the Song Dynasty, the top literati and the excellent officer to the Emperor, Su Shi (Dongpo) assumed office as the Governor of Hangzhou City. Although it was a depressive time for him, he initiated water preservation projects on the West Lake. After the joint work of tens of thousands of workers, dykes were built and a vast area of land benefited from such a project. The local citizens gave him a lot of meat and wine. He decided to cook the liquor and the meat together. Therefore, the delicious dish was invented and has been served ever since. 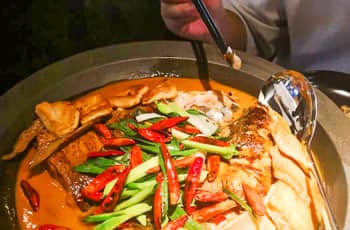 According to the legend, when Emperor Qianlong was on a tour in Jiangnan Area, he accidentally tasted a delicious dish of fish head and people renamed that dish as Qianlong Fish Head. It is a typical Jiangnan dish, in which no earthy taste can be detected. It is soft and smooth. The tofu in it has absorbed the taste of the fish and makes it very elastic. It is very attractive.

Characteristics: The color is bright red and it has a rich taste.
Recommendation: Zhiwei Guan·Weizhuang (Yanggong Dyke Branch)
Address: No. 10-12, Yanggong Dyke, West Lake District, Hangzhou, Zhejiang Province, China (close to Fish Viewing at the Flower Pond, which is one of the ten scenic spots of the West Lake) 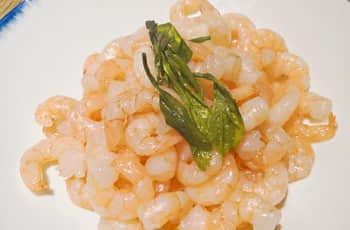 This famous local dish is made with the tender tea shoots of West Lake Longjing Tea and fresh shrimps. Longjing Tea is known to have "green color, fragrance, sweetness and beautiful shape". The river shrimps were praised by the ancients as “the treasure of the product”. The complete dish cooked with two ingredients is white jade colored shrimps, smooth and tender. 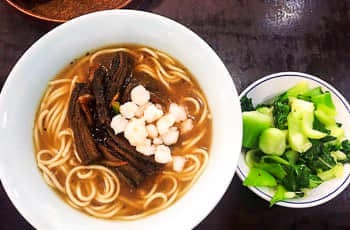 Xia Bao Shan Mian is another specialty Kuiyuan Restaurant in Hangzhou. Big fresh field eels are first cut into slices and stir-fried initially with vegetable oil and then fried with lard as well as a little peppercorn oil. The finished field eels will be golden and crispy. Then large, tender river shrimps and egg white are added to the pot and cooked until they are white and tender. After that, boiled noodles are mixed with the dish.

The preparation of Hangzhou Sauce Duck is complicated. A whole duck is chosen, and sautéed with ginger, soy sauce, Shaojiu wine (yellow wine), cinnamon, shallots, white sugar, potassium nitrate (saltpeter) and salt for 36 hours. Then, the duck is put into the pot with soy sauce for another 48 hours. The duck is boiled in soy sauce, with half as much water added to the soy sauce. The juice is scooped to drench the duck repeatedly until the skin turns a caramel color. The final process is to expose the duck to sunlight for 2 or 3 days. 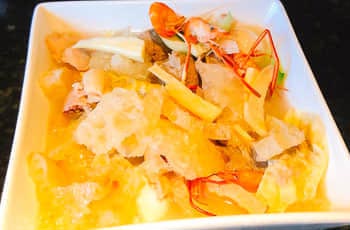 Hang Sanxian is a unique traditional dish in Hangzhou. It is made from pork rind soaked in water, yu rong (mashed fish, mixed with egg white, MSG, starch and salt), cooked chicken and cooked pig tripe. The pig rind is chewy and the meat balls are tender. A variety of flavors can be enjoyed in the one dish.