The residents of Shangri-La are mainly Tibetans, so the diet is mostly Tibetan style. There are also some restaurants of Yunnan and Sichuan cuisine. Shangri-La's food tradition is to retain the original taste, because of the severe climate and special geography. This has improved various local foods with different flavors. 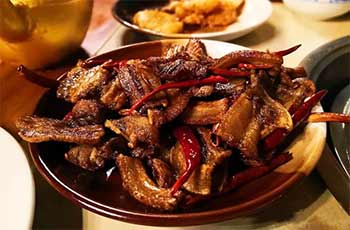 Pipa meat is a kind of bacon made in the Tibetan traditional method. The local people will kill a pig and remove its internal organs and bones. After a little cooling, they add seasonings such as pepper, grass, salt, etc. (some people prefer to add white wine), gently rub it, suture it, press it on a slate, and stuff the pig nose with a cork or corn cob to prevent insects from infesting the carcass. Because it is shaped like a Pipa (a Chinese lute), it was named Pipa meat. Locally, the meat is described as ‘thin and sloppy, and more like an amber’. Because of the process, it can be stored for a long time. If it is left without being touched, it will keep for several years. The meat is delicious, with a transparent texture. It can be boiled and stewed, and is a gourmet food to welcome honorable guests in Tibetan culture.

Where to go: Dali A’peng Restaurant 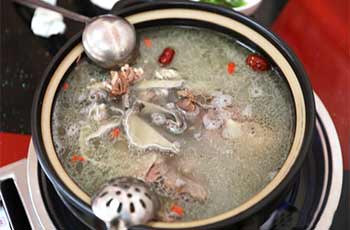 This dish was specially prepared for Tibetan men when they returned from hunting in old times. The wives would cook this when waiting for their husbands to return. This dish means happiness and sweetness. The main ingredient is lamb, cooked with egg yolk, sugar, wine, vegetable oil and ghee. It is golden and tender, and the taste is sweet and sour.

Where to go: Nima Tibetan House 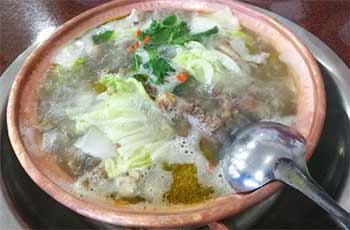 ‘Guoben’ is Ipomoea aquatica in Tibetan language, which is a wild plant that grows in the mountains. To be precise, it is not a traditional Tibetan dish, but the result of ethnic integration. The main raw materials are guoben, artichoke, cooked pork tripe, tofu, water, baking powder, etc., with cooked ham, fungus, and then sprinkled with a little sesame oil. The food is warm, nutritious and nourishing, and it smells so good!. When having this hot pot, it is better to use copper or earthenware containers, as the taste will be even more scrumptious.

Where to go: Baoweiju Tibetan Hotpot

‘Sibu’ is a well-known dish of the Naxi people. The Naxi language for it means ‘blowing the liver’. The pig liver is fully expanded, stuffed with salt, allspice, ginger, fire nitrate, and Shaoxing wine. It is pickled, and then sprinkled with pepper powder to dry. When you have it, you should put the ‘Sibu’ into the stockpot, add capsicum, ginger, and pepper, and simmer it slowly as you stew it. Remove it and cut it into pieces when it is well cooked. The color is fresh and pretty. It tastes spicy and fragrant, and it is easy to store.

Where to go: The Silent Holy Stones Tibetan Restaurant 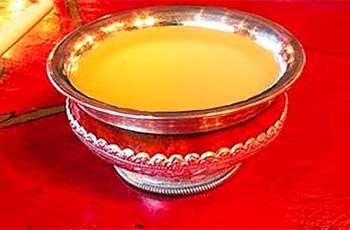 The barley wine is representative of China’s western regions. They usually greet you with barley wine when you visit a Tibetan family. The raw material of Chiang is barley, and it is made from the snow-capped melted water and non-polluted natural mineral water. Chiang has a yellow color, a sweet and sour taste, and a low alcohol content, similar to beer. Drinking barley wine tradition always follows ‘three sips and bottom a cup’: first take a sip, fill it up, take another drink, fill it up, take a third sip and then empty the cup. In the local area, barley wine is an indispensable wine for the holidays, marriage, and reception of friends and family.

Where to go: Yintong Convenience Kitchen

Address: next to Sifang Street in Dukezong Ancient Town (32 Yiruomulang) 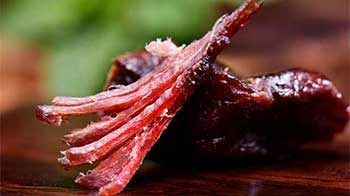 Yak meat is a specialty in Tibet, and has been called the best beef. Yak meat is very tasty, and can be fried, braised, stewed or sun-dried.

Address: opposite to the Xiangbala Coach Station 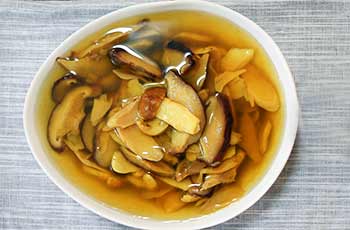 Tricholoma Matsutake is a wild plant that is symbiotic with the roots of pine, eucalyptus and cedar. Its shape is similar to velvet antler. Shangri-La is the main production area of Matsutake, which is harvested from mid-July to early September. Matsutake has also been popular in Japan and Southeast Asia. Fresh Tricholoma Matsutake is fried with green peppers, which is not only refreshing, but is also a very nutritious dish.

Where to go: Jisada Tibetan Hotpot 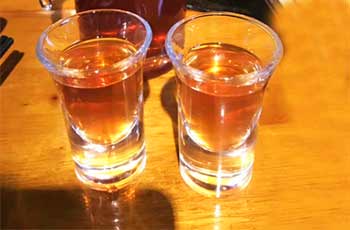 Suolima wine, also called ‘Tibetan Beer’, is a kind of drink with a distinctive Tibetan feature, tasting sweet and sour. Although it tastes light and gentle, it will not be easy to wake up once you get drunk. The production process is not complicated; barley are cooked and then simmered in distiller's sauce and boiled in a large bucket for seven days. It is a bit like the practice of making wine in Western Europe.

Where to go: Qingmu Kitchen