Top Mysteries of the Terracotta Warriors

1. Just how many treasures are in the underground palace and the pits of the Terracotta Warriors and Horses? 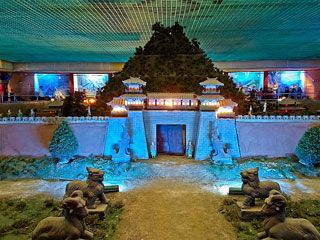 Underground Palace of the Qinshihuang's Mausoleums

During the decades of archaeological work at the Mausoleum of the First Qin Emperor, the number of unearthed relics is more than 100,000. And the excavated part is only the outermost part of the mausoleum, and so it is hard to estimate how many treasures there might be inside.

2. Is the mausoleum underground palace hollow?

Based on the excavation experience of archaeologists, the surroundings of Qinshihuang Emperor’s coffin should be filled with soil. However, according to historical literature, Li Si, the Qin Prime Minister who presided over the construction of the coffin pit, described the tomb as a hollow one, with considerable space around the coffin. It depends on the future excavation for us to know the actual situation.

3. Is the corpse of Qinshihuang Emperor well preserved?

In the mid-1970s, the discovery of “the lady corpse” in the Mawangdui Han Grave shocked the world. It was a true rarity because the corpse was so well preserved. Based on this, some people have conjectured that the corpse of Qinshihuang Emperor might also be well preserved, because the lady lived in a time within 100 years from the Emperor’s day. However, historical literature stated that the Emperor died in summer during his journey. His corpse was shipped back to the burial site fifty days later, and it is very likely that the corpse couldn’t have been preserved well. 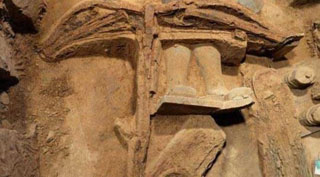 A Crossbow in the Underground Palace

Historical literature suggests that the underground palace is armed with concealed crossbows, which would fire arrows automatically when foreign intruders triggered the system. It remains a mystery as to why the Qin Dynasty could produce such advanced automatic archery weapons more than 2,200 years ago.

5. The Mystery Regarding the Archetype of the Terracotta Warriors

In the late years of the Qin Dynasty the country was in total upheaval. The legions of the capital garrison, which are the archetypes of the Terracotta Warriors, were disbanded. It is said that they joined other troops to chase and hunt General Xiang Yu, the supreme leader who led the conquest of the Qin capital. There are also rumors that the troops turned into the Terracotta Warriors. Of course, such superstitions are mentioned today just to add some mysterious charms to the terracotta figures.

6. The Mystery of Mercury in the Underground Palace of the Mausoleum 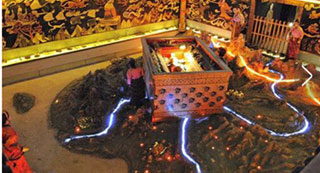 Mercury Inside the Qinshihuang Mausoleum

According to ancient literature, a large amount of mercury was buried in the underground palace of the Mausoleum of the First Qin Emperor, and the explanation is that mercury was used to simulate rivers and the sea. Modern archaeologists have indeed found mercury in the soil of the mausoleum. However, considering it was over 2,000 years ago, we are left to wonder how people injected so much of this highly toxic chemical into the underground palace. Was it really meant to represent rivers and the sea? These still remain enigmas. Some scholars even suspect that this may have something to do with aliens.

7. Where is the sealing soil from?

The sealing soil of the pits of the Terracotta Warriors and the mausoleum is extremely firm. Even bombs cannot rupture it. Such technical capacity was unimaginable for a human society more than 2,000 years ago. Is this also related to aliens? We just have to wait for the scientists to explore and give their explanations based on their studies.

8. The Heights of the Qin Soldiers

The average height of the more than 100 soldier figures in the No.1 Pit unearthed in 2009 is in a range between 1.8m and 2m. In an era in which human diet wasn’t quite healthy, why were there so many tall soldiers? Is it possible that these soldier figures were fabricated taller than their true heights deliberately? Currently there is no literature for evidence. 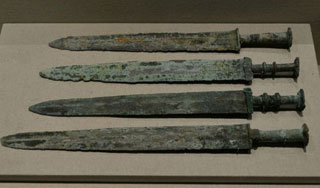 The bronze swords unearthed in the Terracotta Warriors pits are very sharp. They basically appear new and shiny, and some of them have no rust at all. All of them were brilliantly crafted. According to test results, their surfaces underwent an oxidation treatment with chromic salts. Based on historical literature, such technology was invented by Germany in 1937 and by America in 1950. How could China have mastered this technology more than two thousand years ago? One fact worth praising is that such bronze swords show incredible flexibility. One sword was bent by a 150kg figure leaning on it, and it showed a curvature of 45 degrees. The moment the figure was moved away, the bronze sword became flat and straight again. It was natural recovery. Such incredible forging technology is truly remarkable, but nobody has been able to work out how the ancient people mastered such skills.

When excavating the Terracotta Warriors, archaeologists found that the wooden structures of the No.1 and No.2 pits were totally charred or burnt into ash. The pits collapsed after being burnt. The terracotta figures and horses were smashed. Some fell on the ground on all sides. Some lost their heads. Some had broken bellies. Some had broken limbs. Some broke into sections or were even totally fragmented. There were very few intact ones. Who set the pits on fire?