Dubbed as ‘the Eighth Wonder of the World’, the Terracotta Army is one of the greatest archaeological discoveries ever made. Over 8,000 life-size figures of warriors and horses were interred in the mausoleum of the first emperor of China. Each figure was individually carved. The purpose of the army was likely to act as guardian figures for the tomb or to serve their ruler in the next life. The site was discovered in 1974 and the realistic army figures provide a unique insight into ancient Chinese warfare, from weapons to armour, chariot mechanics to command structures. In 1987 the site was named by the United Nations Educational, Scientific and Cultural Organization (UNESCO) as a World Heritage Site.

Facts About the Terracotta Army

This exhibition area is made up of three pits containing the Terracotta Army and an exhibition hall that features the Bronze Chariots and Horses.

1. There is no recorded date as to when the Terracotta Army was built, but experts believe it was between 247 BCE and 208 BCE. Qin Shihuang came to power in 246 BCE when he was 13 years old and died in 210 BCE. It is customary for the emperor to build their mausoleum when they come to the throne. 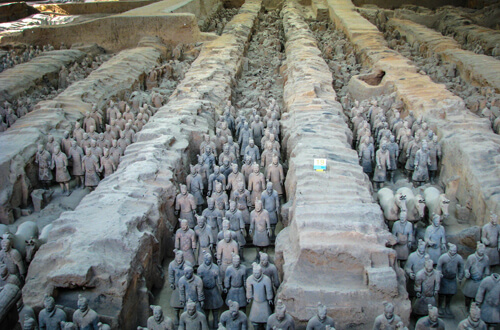 2. There are about 8,000 soldiers, 130 chariots, and 670 horses in the Terracotta Army. Every soldier is unique, no two are alike, and each has detailed and realistic features.

3. The soldiers of the Terracotta Army were originally painted in varying colours according to their rank and costume. Scientists are using various techniques to preserve the paint found on the warriors.

4. All of the Terracotta Army was equipped with real-life items. For example, many had forms of weaponry. It is believed that those items were stolen.

6. The Terracotta Army was looted and burned. Xiang Yu, a military leader who overthrew the Qin dynasty in 206 BCE, is the prime suspect in the arson and looting.

The official name of the Terracotta Army Museum is Emperor Qin Shihuang's Mausoleum Site Museum. It was part of Qin Shihuang's Mausoleum. Qin Shihuang is also known as Shi Huangdi or Shi Huangti. He was the king of the Qin state who unified China from 221 BCE and then founded the Qin dynasty. He ruled as China's first emperor until he died in 210 BCE. He undertook gigantic projects, including building and unifying various sections of the Great Wall of China, his mausoleum, and a massive national road system, all at the expense of numerous lives. He also conducted a book censorship movement called "Burning of Books and Burying of Scholars", where thousands of literary and philosophical works were destroyed and more than 460 scholars were killed. It is estimated that the tomb took 38 years to build, between 247 BCE and 208 BCE, and utilized the labour of over 700,000 conscripts. The emperor died in 210 BC. On March 29, 1974, the first in an extensive collection of terracotta warriors was discovered in Xian, China. Local farmers came across pieces of a clay figure and these shards led to the discovery of an ancient tomb, vast in size and number of artifacts. The portion containing Qin Shihuang’s remains is still unexcavated.

Why Was it Built? 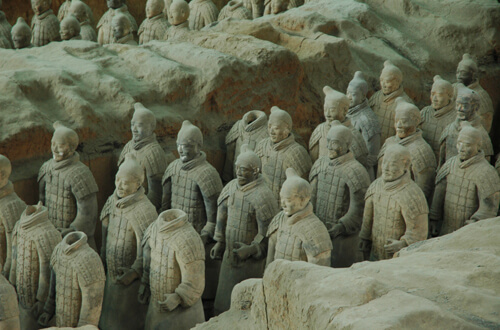 Human sacrifice was practiced in China for thousands of years. The practice of human sacrifice had long since fallen out of favour by the time China was unified in 221 BCE by Qin Shihuang. The Qin people believed statues of human beings could do this job. In the eyes of Qin Shihuang and his craftsmen, being buried with clay figures was just as good as having the real thing. In ancient times, people in China and elsewhere believed the dead would pass into another kind of life. Their mortal bodies were gone, but their souls would survive and continue to live as their earthly ones did. In order to prepare for this next life, important people were often buried with the things they had customarily used during their lives on Earth. These things ranged from the useful and practical, such as clothing or dishes, to the decorative and entertaining, such as musical instruments or jewelry. Some of the objects were real. Others, such as the terracotta soldiers, represented their living counterparts. So, it was believed that the Terracotta Army was built to guard the emperor in his afterlife.

Things to See in the Terracotta Army Museum

The largest of the three main pits measures 14,260 sq m (153,493 sq ft)—almost as large as two football fields. Qin’s main army, composed mostly of infantry, stands at the ready in this pit. The majority of the warriors have not yet been excavated, but archaeologists estimate the pit holds approximately 6,000 statues in total. Most of them are lined up in long, parallel columns—a standby formation as they await their call to duty. At the front are three rows of archers, a vanguard positioned to initiate the attack on the enemy. One row would shoot, while the others reloaded. In between the bowmen and the infantry are the war chariots, each manned by a charioteer. One or two soldiers stand beside each chariot. Armed with 20-foot (6 m) lances, they could keep a sufficient distance from the enemy to prevent their horses from being injured. 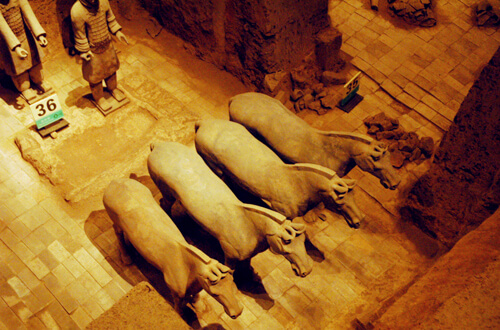 The second pit is approximately 6,000 sq m (64,583 sq ft) in size and contains a wider variety of figures, including infantry, cavalrymen, and horses. The arrangements of the soldiers show the Qin military used a variety of formations to fit battle conditions, with the core army in the first pit providing a solid wall of human power and the additional specialized units in the second providing flexibility for unusual conditions.

The third pit measures approximately 520 sq m (5597 sq ft), is slightly larger than a basketball court and is the smallest of the three main pits. Designed in a U shape, its contents suggest it is the army’s headquarters. A total of 800 figures of soldiers were found together with 18 wooden chariots and more than 100 pottery horses. Animal remains indicate ritual sacrifices were performed here before battle, perhaps to predict the outcome. 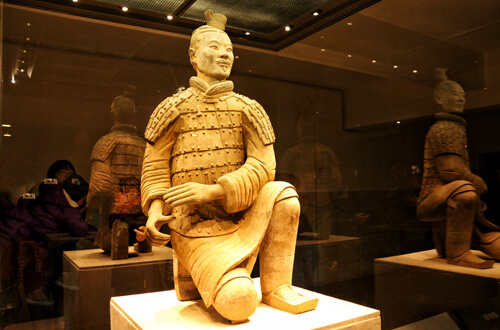 In this dedicated exhibition hall, you will find the two stunning bronze chariots that have been discovered so far. Made from bronze, lead and decorated with gold and silver, they would have been very shiny when first made. Both are pulled by gorgeous horses. One chariot is enclosed and has a kneeling driver. The other has a charioteer sitting under a large parasol. These objects are some of the best archaeological evidence researchers have for understanding the spiritual beliefs, military practices, and values of the ruler responsible for unifying China for the first time in its history.

The museum is about 40 km (25miles) from the city center of Xi’an. Getting to the warriors is relatively easy to do. You can take Bus 306 (also called Tourism Bus No.5), 914 and 915 from the East Square of the Xi'an train station. Or you can hire a taxi for one day.

We recommend you should visit the first pit, followed by the third pit, then the second pit, and finally the Exhibition Hall. Since the first pit is the most magnificent you can visit them the other way around if you want to save the best for last.

How to avoid a crowd

You can get there early as most groups will arrive at the museum around 10 am.

The entrance fee is CNY150 in the high season from the 1st of March to the 30th of November and CNY120 in the low season from the 1st of December to the 28th of February. If you decide to do the tour independently, you need to buy tickets online in advance: Buy tickets online. We strongly recommend that you join a guided tour from Xi’an or hire an English-speaking guide at the Ticket Office of the museum.

The ticket price also includes entrance to the Mausoleum of Qin Shihuang, 1.5 km from the Terracotta Army Museum (a free shuttle bus connects the two sites). It is worthwhile having a quick visit to this site if you have enough time. However, it is almost completely unexcavated and consists of a nice park with a monument. If you are short of time, this could be skipped. 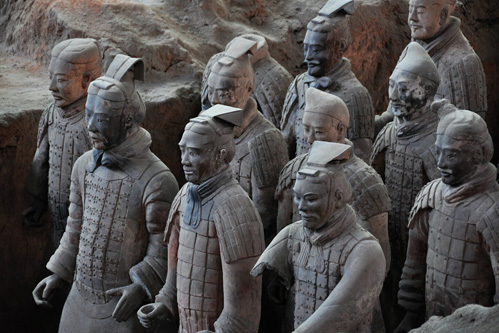 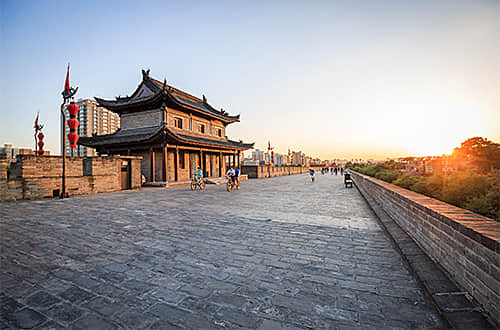 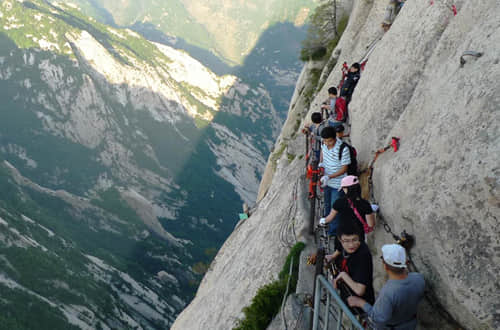 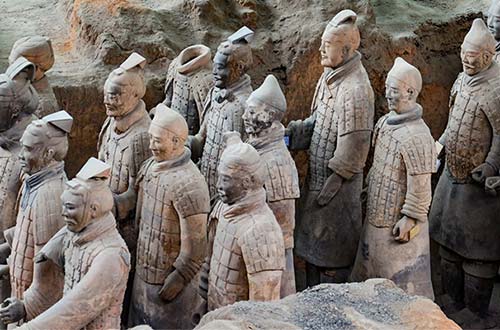