A Great Place for Photography Enthusiasts

The Longji Terraced Fields were initially ploughed in the Yuan Dynasty (around 650 years ago). The outside world was too dangerous to the ancient peasants, so they escaped into the mountains. Now the Longji Terraced Fields cover an area of 66 square kilometers. For hundreds of years’ efforts, the local villagers have worked out a very effective way to cultivate rice on the terraced fields. The villagers might predict that their descendants would produce more rice than themselves, but they could never imagine the land they ploughed are not only used for agriculture nowadays, but also one of the most popular tourist attractions in Guilin. Pingan Village and Jinkeng Area are two most visited destinations of the Longji Terraced Fields.

The stilt houses and Zhuang People’s costumes and foods are the highlights in Pingan Village. Besides, two sightseeing terraces, Nine Dragons Five Tigers and Seven Star with the Moon are must-go places in the village. 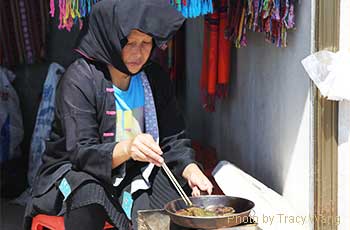 The major colors of Zhuang People’s costumes are black, white and pink. The costumes look heavy, but it is a perfect match when a Zhuang woman is in her traditional costume with silver headwear. During festivals, such as the Spring Festival, the Zhuang People will fully dress themselves up. These festivals are best occasions to enjoy these exquisite costumes. 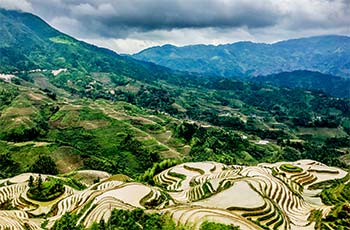 Seven Stars around the Moon

A piece of field is surrounded by seven peaks with different size in the Pingan Village. The field looks like the Moon and the peaks around the field seem to be stars who are guarding the Moon. The most beautiful sunrise and sunset pass through the sky above the attraction every day.

Standing on a terrace in Pingan Village, tourists can see nine mountain ridges and five peaks, which are considered to be the symbol of the terraced fields by the villagers. So they named the terrace Nine Dragons and Five Tigers. 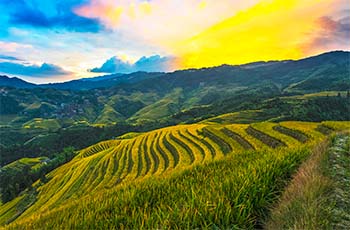 Jinkeng Area consists of over 20 villages, among which the Dazhai Village is the most popular and beautiful one. Different from Pingan Village, the major villagers in Daizhai belongs to Yao Ethnic Group. They like red clothes, so people also call them the Red Yao.

Gold Buddha Summit is a sightseeing terrace. It is the best terrace to see the sunrise and sunset in Jinkeng Area. Standing on the terrace, a phoenix consists of several long ridges of fields is in sight. Villagers believe it is the Buddha who allows them to see the wonder. In order to show their gratitude and respect to the Buddha, they call the terrace Gold Buddha Summit.

Standing on the West Hill sightseeing terrace, the Cat Mountain (2141.5 meters high), highest mountain in Guangxi Province, is visible, besides, the highest peak in Longji Terraced Fields area, the Fupingbao, can also be seen. 80% area of the Longji Terraced Fields is under the West Hill. Stream, clouds and insects’ sounds are all fascinating attractions on the terrace. 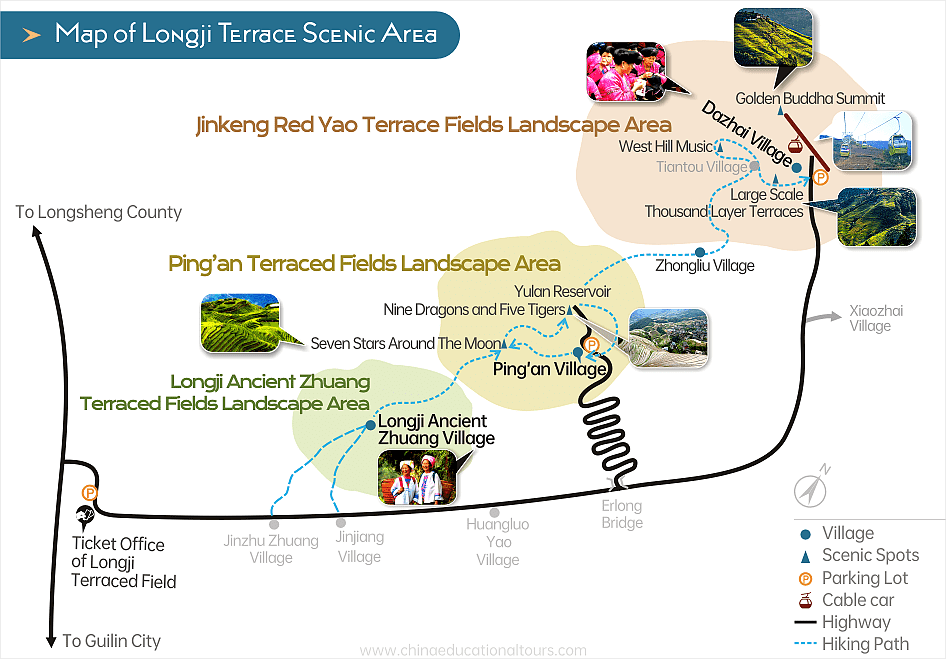 The months when there are festivals are absolutely the best time to visit the fields. Tourists get the best experience by celebrating these festivals with villagers. Cole Flower Festival, Spring Ploughing Festival, Red Clothes Festival and Golden Autumn Festival are four most popular events on the Longji Terraced Fields.

Cole Flower Festival - This festival is celebrated between March and April. The golden cole flowers are everywhere on the fields. Accompanied with stilt houses, streams and stone bridges, the fields become a panting of the Arcadia described in ancient Chinese poems.

Spring Ploughing Festival – It is a green world. Villagers are working in the fields with joy and songs. Do you want to sing with them? This festival is held between every May and June.

Red Clothes Festival – It is a festival celebrated by the Yao People in the Jinkeng Area. The date is the sixth day of the sixth month according to Chinese Lunar Calendar (around July 6th). Villagers air their best clothes together to show the solidarity of the Yao People. The rice buddings are also indispensable.

Generally speaking, the Longji Terraced Fields are green between May and August, golden between late September and October (harvesting season) and white between December and next February (covered by snow). Different tourists’ best traveling times are up to their favorite colors.

How to Travel on the Longji Terraced Fields

Hiking is most tourists’ choice. Hiking from the Pingan Village to the Jingken Area allows tourists to see and best views, to breathe the best air and to experience the real local life. Besides, there are cable cars in Jinkeng Area. Overlooking the terraced fields in a high cable car is also an excellent experience.

Longji Ancient Zhuang Village, Ping’an Village, and Dazhai Village are the three most scenic villages among those ethnic communities. The paths between these villages have become the hiking trails for visitors.
Recommended Hiking Routes:

1. Easy level of physical requirement. Take the vehicle directly to the Ping’an parking lot, where your hike starts from. Ping’an Village, Seven Stars around the Moon, and Nine Dragons Five Tigers are all on the visiting list. The total length is around 4.5 km and you can return to Guilin city in the late afternoon.

2. Moderate physical fitness is required. This trip also can be done in one day. The route is from Longji Ancient Zhuang Village to Ping’an Village, which is around 12 km. Longji Ancient Zhuang Village is home to the Zhuang tribal people as well. En-route, you can be totally immersed in the freshness of nature and the endless terraced fields near Ping’an Village. Admiring Seven Stars around the Moon and Nine Dragons Five Tigers is also available on your arrival at Ping’an Village.

3. Spending 2 days / 1 night on hiking in the terraced fields is a challenge. It is suited to the enthusiastic hikers.
Day 1: drive you to Ping’an parking lot and have an early lunch in Ping’an Village before the 6-hour hike. Firstly, you will head to the viewing platform of Seven Stars around the Moon and Nine Dragons Five Tigers, which is around 1.8 km. Continue to hike from Nine Dragons Five Tigers to Dazhai Village, and you will pass by Yulan Reservoir and Zhongliu Village, in total a length of 22 km. You can catch up with the sunset on Gold Buddha Summit if you have enough energy and luck. Food and drinking water are supplied in Zhongliu Village, or you can get everything ready in your hotel. Stay overnight in Dazhai Village. (Note: the facility and service of the hotels in Dazhai Village are not as good as Ping’an Village.)
Day 2: see the sunrise on viewing platform No. 1 (West Hill Music) in the early morning. After a rest, you will hike down from the mountain and stop by Large Scale Thousand Layer Terraces. Go to Dazhai parking lot and be transferred back to Guilin city.