Ba means eight, Duan means pieces or sections, and Jin refers to the finest silk, or brocade. Jin has the connotation of a person’s best, most precious, and decorative possession. The Ba Duan Jin Qi Gong is composed of eight postures, and the name suggests that this form of exercise is the most valuable thing a person could have. The earliest written record of Ba Duan Jin dates back to the Northern Song Dynasty (960–1279 CE).here were both standing and seated versions of Ba Duan Jin. A number of variations on the standing form have evolved over time. It is also used as part of the warm up in some martial arts, in particular among those practicing Shaolin Kungfu, where it is the first form taught in Shaolin Medical Qigong. The results of various medical studies have revealed that Ba Duan Jin significantly improves the flexibility of the spine, calves and Achilles tendon, and also the shoulder joint and sacroiliac joint. In addition, it alleviates pain in the knees and strengthens the entire physical structure, in particular the quadriceps muscles and the calves.

In 2001, the General Administration of Sport of China released the standardized Ba Duan Jin. There are eight routines in the Ba Duan Jin. Each routine has its benefits and together they stimulate the 12 meridians inside us. It is very easy to master and the benefit is quick to take effect. It only takes you 12 mins for one practice. Let’s practice it together: 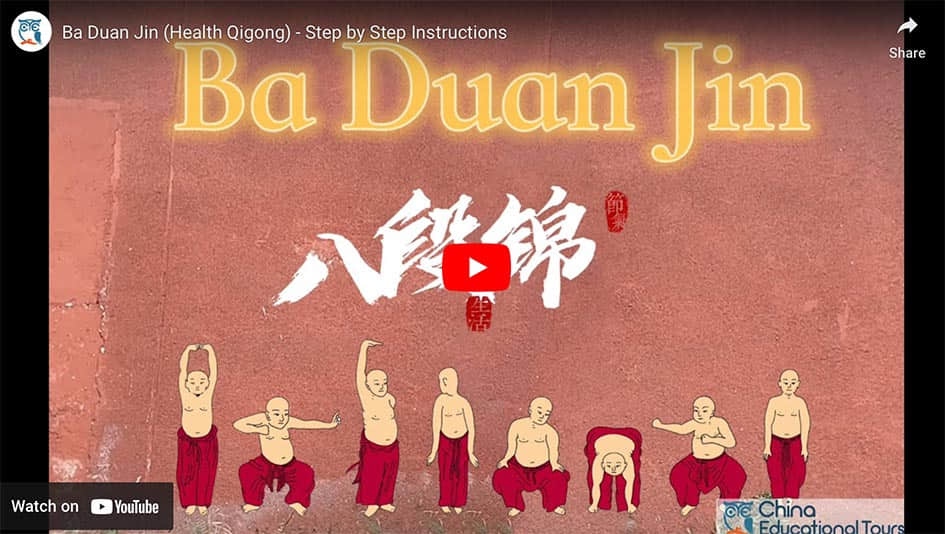 Stand straight with heels together and toes apart. Hold the head erect and neck upright. Lift the back. Loosen the chest and shoulders, and let both arms hang loosely from the shoulders. Your arms should hang down in a relaxed manner at your sides. The palms of your hands should face your thighs. Close the mouth; join the teeth, with the tip of the tongue lightly touching the roof of the mouth. Breathe softly in through your nose and blow out softly through your mouth. Clear your mind and calm your spirit. Relax in a natural way.

Step out with your left foot with feet shoulder-width apart, knees are slightly bent and attention is placed on the tip of the nose. Stand with the palms facing inward to the lower Dantian (two inches below the navel). Then interlace the fingers and raise both hands above the head with the palms facing upward, as if holding up the heavens. The eyes should follow the hands over the head. Hold the posture for a few seconds before gently returning to the starting position from both sides. Inhale through the nose while bringing the arms up, and exhale through the mouth when bringing the arms down. Repeat the routine six times.

San Jiao is a concept in Traditional Chinese Medicine (TCM), which means “three burners”. They direct the integration, communication, and coordination of the five organ systems or networks of the body (Kidney, Liver, Heart, Spleen and Lung). It is also the passage for water, nutrients and fluid throughout the body. This exercise activates the fluid flowing in it and ensures proper nourishment throughout the body.

Start with your left leg to the left and squat down in a horse-riding stance. Lift your hands to your chest area, bring your palms together, then separate them with your half-clenched left hand moving near the left nipple, while the right hand, changing into “single finger form (index finger is vertical, all the other fingers curled inward and touching the palm)”, stretches to the right as if you were pulling a bow to shoot a hawk. Your eyes will focus on the tip of your index finger. Then stand up and lower your hands, do the same routine to the left.

This routine is to benefit the lungs by expanding the chest and exercising the muscles of the upper body.

When you finish the last routine, stand up and move your left leg back so the feet are parallel and shoulder width apart. Then move your hands to the front of your stomach with palms facing inward. Raise your right hand over your head and push upward, and at the same time the left hand moves downward with the palm facing down. When the arms are extended, straighten the legs. Then change your hands and repeat the same process. You should feel that both hands are pushing against resistance, but do not tense your muscles. Inhale through the nose when both hands are in front of the chest, and exhale through the mouth when the arms are apart. Repeat the whole procedure six times.

This section is to regulate the spleen and stomach by the lifting and lowering actions. It contributes to the ascending of spleen-qi and the descending of stomach-qi, thus promoting the digestive functions.

Lift and step with the left foot and place your feet at a shoulder's width apart. Look straight ahead and gaze at some distant point. Your palms face inward so it looks as if you are embracing a small balloon. Inhaling while slowly turning the head to the right side as far as possible, look back as much as possible, then exhale and return to the original position. Repeat on the left side as one complete procedure and repeat six times. When you turn your head, extend your arms to the side while rotating the palms to face the forward. Your body should remain facing to the front, do not turn it when you turn your head.

This section is to benefit those with consumptive disease and injuries by enriching the essence and blood, calming the mind and promoting organ functioning.

Start with your left leg to the left and squat down in a horse-riding stance. Put your hands on the center of your thighs with thumbs outward and other fingers inward, look down and lean the torso and head forward, exhaling while swinging the head to the left and swinging the buttocks to the right; keep your head, neck and spine in a line, do not drop your head. Inhale while returning. Switch directions and repeat the cycle six times.

It is said that swaying the head can send down heart-fire while swinging the buttocks causes the kidney-yin to ascend to meet the heart-fire; it lets both organs mutually complement each other.

Routine 6 – Moving the Hands down the Back and Legs, and Touching the Feet to Strengthen the Kidneys and Waist (两手攀足固肾腰 liǎng shǒu pān zú gù shèn yāo )

Your feet should point straight ahead. Bend the knees slightly. Relax the shoulders. Hands would be drawn upward in front then turn upward, fingers pointed backwards, hands drawn backward alongside the ribs. Then, massage the kidneys. Draw the hands down the back of the legs (the Bladder Meridian runs along the back center of both legs), then touch the toes. Extend the arms forward and bend from the waist to raise the arms. Repeat the process 8 times.

This section can reinforce the kidneys and strengthen the waist and the knees. The TCM holds that the kidneys are the source of all energy in the body and are located near the waist; constant practice benefits the function of all the other organ systems as well.

Step your left foot to the side and squat down in a horse-riding stance; arms are positioned at the waist. Hands are held in a soft and relaxed fist. Palms are up. Punch out with one arm, and end the punch with your thumb up. Then open the hand as you turn the palm outward, extending the thumb downward. Then, gently turn the wrist, fingers relaxed, until the palm faces upward. Move the thumb to the center on the palm, then curl the fingers over the thumb. Then draw the fist back to the waist. Exhale through the mouth as the arm moves out, inhale through the nose as the arm moves in. The lips should be slightly parted, with the tongue at the top of the mouth.

Eyes should be wide open, staring forward, and the gaze should be intense.

This is said to strengthen the muscles of the whole body and improve lung functions.

Drop both hands down naturally beside your body, stand still and keep your mind calm, then raise up your heels and hold the posture for a few seconds before gently returning to the starting position. Inhale while lifting on both heels; exhale while returning. Repeat six times.

Keep the mind in the lower Dantian as you move your hands to your belly with palms inward. Do not move too quickly. Keep the body still and quiet for a short while. Keep the mind focused on the lower Dantian and feel that the body and the breath are calm and relaxed. Then rub your palms for 10 seconds, and then use your palms to massage your face. And finally swallow your saliva three times. Qigong practitioners consider saliva (which they call 'jade liquid') to be full of life force energy or chi.

I learned Ba Duan Jin from a colleague in our company in 2010, and I have kept on practicing it at least once a day since then. I suffered from a frozen shoulder and occasionally mouth ulcers before I practiced Ba Duan Jin. After about six months’ practice, I found that my frozen shoulder is greatly relieved and the mouth ulcers have disappeared. From then on, I encouraged my colleagues to join me for the practice during tea break. We practice it with the Ba Duan Jin music produced by General Administration of Sport of China. It is a refreshing exercise!