News of doctors teaching patients with mild Covid-19 symptoms to practice Taiji Quan and Ba Duan Jin in makeshift hospitals in Wuhan has gone viral on social media since early February 2020. Experts say those exercises are good for patients' recovery and can also reduce their anxiety.

Qigong has been practiced in China for thousands of years. It has long been known to relax the mind, muscles, tendons, joints, and inner organs, helping in turn to improve circulation, relieve stress and pain, and restore overall health. In addition, physical movement is combined with training the mind to direct the body's energy, or chi, to any part of the body. When practiced correctly, Chi can help bring your body to a natural state of balance and well-being. In recent years Health Qigongs have spread far and wide, and they are not only practiced by enthusiasts in China but are also fast becoming one of the most popular exercise systems practiced by people all over the world. Health Qigongs are simple, easy to learn and yet offer excellent benefits to physical and mental wellbeing. The health qigongs can be practiced at different levels to suit people of all ages. 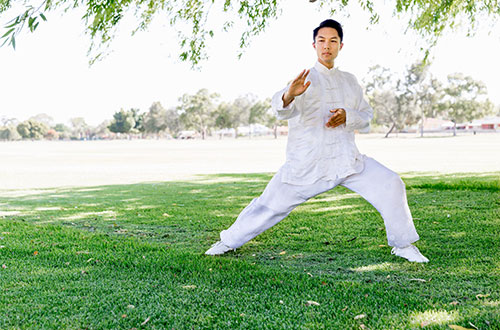 Qigong (pronounced ‘Chee-Gong’) originated in China about 4,000 years ago. The literal translation of qigong is “to work with qi”. It is based on Traditional Chinese Medicine (TCM) principles, which state that qi, or energy, is present in everyone’s body. The Chinese believed that gentle exercise, which incorporates the mind, breathing, and body, helps to cultivate and promote circulation of qi within the human body, thus enhancing a practitioner's overall health. If qi becomes stagnant in a certain area, health problems can occur. Proper flow of qi can help the body engage its own healing processes. There are various forms of Qigong, as some are done with no movement at all, in standing, sitting and supine positions, while some are done with gentle movements, and some with movements mixed with stretching of the body or dynamic exertion of power.

In China, Qigong practice is divided into three main schools: Medical, Martial and Spiritual. The three schools are all based on the same philosophical system and share many of the same meditations and techniques. The schools differ primarily in focus. Students choose a school based on the use that they want to put their Qigong training. Briefly, each school focuses on one of the following specialties:

It's an integral part of Chinese Energetic Medicine which trains doctors and healers in special Qigong methods for health maintenance and longevity, disease prevention, and the diagnosis and treatment of diseases and disorders.

What is Health Qigong?

What are the benefits of Health Qigong Practice?

Many studies have shown that Health Qigong offers a variety of benefits. It’s generally safe and easy for nearly anyone to practice. The benefits of Health Qigong include:

There many other physical and psychological benefits apart from the ones mentioned above. Health Qigong is truly an amazing exercise system suitable for people of all ages and all levels of physical ability.

Common Terms That Will Help You to Understand Health Qigong Exercise

In Chinese medical theory, there are three things that are essential to sustaining human life: Jing, Qi, and Shen. They are called the “Three Treasures,” and each one contributes to the overall health and wellbeing of the body. There are three “Dantians” which you’ll focus on during different periods of your Health Qigong practice.

The first treasure is called “Jing”, which is translated as “essence.” Jing is our life Essence. It is seen as the basis of growth, development, and reproduction. Our essence can be depleted by life itself or exhausted by overwork, stress, and excessive emotions. It can also be replenished through certain types of Qigong and herbs.

The second treasure is called “Qi”. Qi is a refined and subtle substance but it can also be a functional activity of the organs in the body. Without Qi we would not be able to move and we would die. As with any other substance in the body, qi has specific functions. It is the source of all movement in the body, it warms the body to maintain a normal temperature, it defends the body against pathogens, it transforms food into useful substances in the body, and it helps to hold things in their proper places.

The final Treasure, “Shen”, is translated as “Spirit” or “Mind.” The Shen is responsible for consciousness, cognition, emotional life and our “presence”. When we practice Qigong, we also train the Shen or the mind. The practice of Qigong can calm the mind and spirit. It is said that a person with a strong Shen is intelligent, clear, centered, strong-minded, calm, and at peace. Qigong training will naturally calm and concentrate your mind and spirit by simplifying and purifying the mind and diminishing your desires.

One of the most common terms in qigong is Dantian. The Dantians are energy centers in the body of which there are three. Many types of Taoist and Buddhist meditations and Qigong instruct the student to bring their attention or awareness to the Dan Tian, as it is believed to quiet the mind. Dan translates to elixir, and tian to field, thus the Dantian are fields (or pools) of the elixir of life and wisdom (qi.) Each Dantian corresponds to a different body energy. The lower Dantian is considered the most important and is located in the lower abdomen near the navel. The lower Dantian stores qi and Jing. If a qigong practice refers to the Dantian and does not specify which one, it is always the lower Dantian. 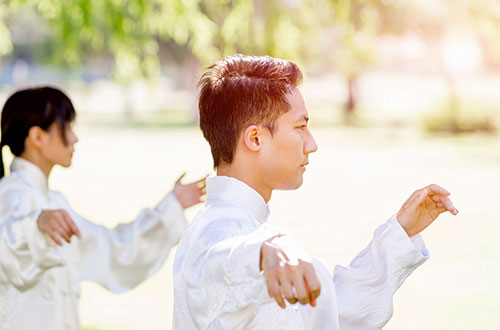 The middle Dantian is located at the level of the heart, stores qi, and is related to respiration and the health of the internal organs. It is the balance between yin and yang and flows both upwards and downwards in the body.

Finally, the upper Dantian is located in between the eyebrows at the point known in some cultures as the third eye. The upper Dantian stores Shen, which is a term referring to spirit or conscious energy. It flows upwards towards heaven and is associated with yang of the yin and yang.

Qigong views each Dantian like a reservoir. Jing, Qi, and Shen are used up in dealing with the stressors of life, but the reservoirs are refilled through meditation or qigong techniques, good nutrition, breathing, and time in nature.

To get the maximum benefits from Health Qigong exercise, you should keep in mind the following points:

What are some easy Health Qigongs I can practice on my own?

The most popular health qigongs are Yi Jin Jing (Muscle and Tendon Change Qigong), Ba Duan Jin (Eight-Section Brocade) and Wu Qin Xi (Five-Animal Qigong). They are simple and easy to learn. It will be good to learn from an instructor, but you can also learn them from online courses if you can’t find an instructor near you. It takes you only 12 mins for each practice, and you can do it anywhere from office to parks. No previous knowledge or practice is needed to start these exercises.

Legend has it that Bodhidharma arrived at the Shaolin Temple only to find that the monks were sick, weak, and unable to go deeply into their sitting meditation. To solve the problem, he taught them Yi Jin Jing (Muscle and Tendon Change Qigong). And it worked. The Shaolin Monks turned into some of the best meditators in history, not to mention some of the best kung fu masters.

It focuses on infusing soft tissue, including ligaments, tendons, and fascia with a specific kind of qi. With practice, the body becomes significantly stronger and more flexible.

Ba Duan Jin literally means “Eight-Section Brocade”. Its creation can be traced back to the Song Dynasty (960 – 1279). This 800-year old exercise is very popular among the Chinese people. There are different postures such as sitting or standing; each section can be practiced on its own and each targets a specific organ. Ba Duan Jin is an incredibly effective energy balancing technique, very good for energy overload problems.

The character of Ba Duan Jin Qigong is gentle, slow, smooth and consistent. The exercise rhythmically combines relaxation and strength, and dynamism and inertia. It combines mind and body to cultivate vital energy.

Wu Qin Xi is a qigong exercise that imitates the actions of animals based on the habits of the tiger, deer, bear, monkey and crane. It can be called Five-Animal Qigong. Its creation was attributed the famous physician and surgeon Hua Tuo (110-207CE) who had great skills as a surgeon, acupuncturist, herbalist and knowledge of human anatomy.