Performers and Roles in Peking Opera

Peking Opera has a number of very predictable elements. The drama is presented for the enjoyment of the audience through the medium of four specific skills of the performers. Specifically, these skills are singing, dialog, dancing, and martial art.

If you are watching Peking Opera, you can appreciate it without fully understanding everything you hear, because there are stylized roles and actions. Looking at each of the players, you can tell their character by their costumes, painted faces, and their exaggerated movements help to tell the story.

The characters in the drama fit into a number of very specific roles. In the early days there used to be seven role categories, but as the art form developed they were divided into four main roles. The manifestation of each role during the performance indicates to the audience the gender, age, kindheartedness (or evil intentions), and physical beauty or ugliness of the character being portrayed. The four basic roles, each of which has a number of subtypes, are Sheng (male), Dan (female), Jing (painted face), and Chou (male clown). Each character type has its own set of performance conventions.

Sheng is the main male role. The senior male role is Laosheng, a dignified, older bearded man with a gentle and cultivated disposition, acting with decency. Laosheng roles include generals and high-ranking military officers with a more cultivated disposition than their real life counterparts. The beard is black or white, depending on the role's age, and the costumes are less colorful than the warriors with a painted face.

Hongsheng, this character has a red face, and a vigorous and high pitched voice.

Another is Xiaosheng, which is a young male character, without a beard, who sings in a high, shrill voice that occasionally breaks like that of an adolescent. Xiaosheng can be divided into Wen Xiaosheng - a young scholar - and Wu Xiaosheng - a young warrior. Depending on the role's position in society, their costumes could be simple or elaborate, with the young warrior featuring long pheasant feathers rising in sweeping curves from his hat.

There is also the acrobatic male character, Wusheng, who has a good natural singing voice and must be very good at martial arts, combat and acrobatics. The actor performs with swords and a shield, which are wielded deftly without actually touching to opponent.

There is sometimes also a child Sheng role, Wawasheng.

Any female role is referred to as Dan, for which there are several subtypes. Old women are played by Laodan; martial, acrobatic women are Wudan; young female warriors are Daomadan; virtuous and elite women are Zhengdan (Qingyi); vivacious , unmarried women are Huadan.

Qingyi is the most important role in Peking Opera, playing characters that are dignified, serious, and decent, mostly wives or mothers. The costumes are yellow, the movements are small, and the singing is pure and high pitched.

Like the male role, Wusheng, the Daomadan female actors are trained for action and skillful performance. The role features an impressive headdress, and military weapons.

The Jing is a male role with a painted face, who may play either a primary or a secondary role. The performer needs to be a forceful character with a strong voice, and able to exaggerate gestures. There are 15 basic facial patterns, but over 1000 specific variations of these, with each one being unique to a particular character. It could be a comic role, a villainous character, or a righteous person. He has a robust, gruff, bass voice, and along with his swaggering, self-assertive manner, be is the most forceful character in his scenes. The actor's face color speaks of his character - red for good, black for brave or upright or reckless, white for treacherous and cunning, yellow for brutal, and blue for wild.

The Chou is a male clown role. The actor's nose is always painted with white powder, making him easily recognizable. In Chinese, 'chou' means "ugly", and the idea is that a combination of the clown's ugliness and laughter can drive away evil spirits. The subtypes of this role are Wenchou, which is a civilian role such as merchants and jailers, and Wuchou, which plays minor military roles. While the Chou plays minor roles, the characters are generally a bit foolish, but amusing and likable. Their costumes are sometimes simple for lower status characters, and sometimes elaborate, for high status characters. 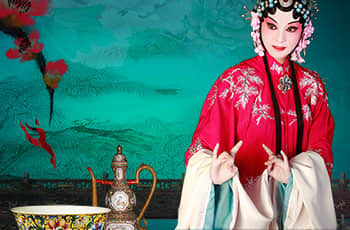