As a gourmet capital, the delicacies in Chengdu are always served in proper amounts and various patterns at affordable prices. Delicacies from all ethnic minorities in Sichuan can be found in Chengdu. 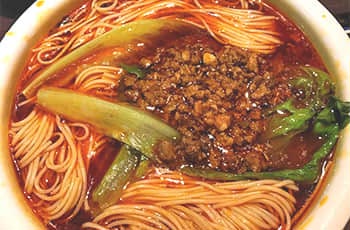 Dandan noodles were first sold by vendors who carried them using a bamboo pole (called Dandan) over their shoulders on the street. The noodle is cooked in water. Fried minced meat is then dressed over the noodle. The thin, smooth noodle dressed with sauce tastes delicious and spicy, as the aroma can be smelt from far away. 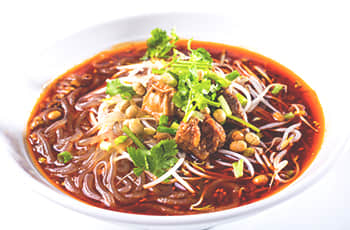 Visitors could see a Feichang Fen restaurant in almost every lane here in Chengdu. The spicy and delicious intestine vermicelli was invented during the late Qing Dynasty. The hand-made vermicelli is chewy and the intestine has a unique fragrance. 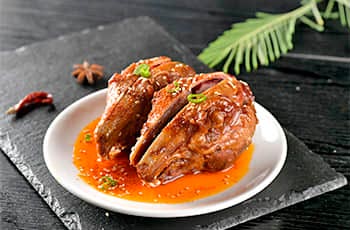 Rabbit head is a very authentic Chengdu delicacy, or a delicacy that can probably only be enjoyed by the locals, and ferociously. Rabbit heads are serve stir-fried, dressed with sauce, marinated, seasoned with spices (chili excluded, for your information), Ma La spicy (using Sichuan peppercorn) flavored, etc. Foodies have to go through the bones to pick out the rabbit meat, technically speaking. Rabbit heads are a true snack for the locals.

Characteristics: One cannot pick very much meat from a rabbit head. But the tender brain is really favored by those loyal foodies, in this case, the natives.
How to eat: Remove the jaw, the face bone and the back of the head carefully and you can share the experience of a good zombie.
Recommendation: Lao Ma Rabbit Head (rabbit heads made by a caring mother for her child)
Address: No. 245, Changshun Street, Qingyang District, Chengdu City, Sichuan Province, China 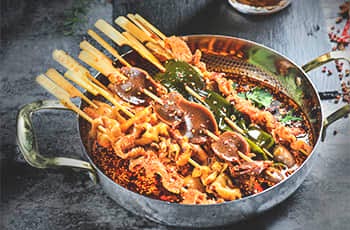 Skewers made from bamboo sticks have been served for hundreds of years. They are named after the use of earthenware jars. Sichuan folks call it a Bo Bo Ji. The well-cooked food is first loaded onto the bamboo sticks. Then they are submerged into the well prepared spicy sauce in a jar. In the early days, only chicken, skin and wings were used. Now, people favor vegetables, cattle strips, lotus roots and many other foods that used to be dedicated to the hot pot materials. Maybe people will still come up with more ideas for the delicious sauce in the jar.

Characteristics: the Ma La (local peppercorn used) crispy Bo Bo Chicken is neither too salty nor too sweet. The tender meat and fresh vegetables can be dipped into the red oil or the one with wild peppercorns can be used.
Recommendation:
Leshan Xianwei Bobo Chicken
Address: No. 16-19 Caotang North Road, Qingyang District, Chengdu City, Sichuan Province, China 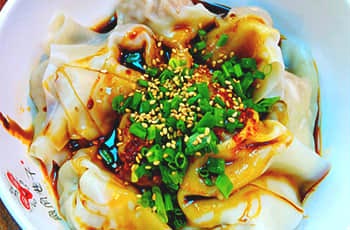 Wontons are referred to as Chaoshou in Sichuan. The skin of a wonton is as thin as paper. It is translucent when cooked. The minced meat is tender and smooth. Visitors can choose either the white soup, which is made of slow cooked poultry's bones, or the red soup, which is prepared with the red oil or local peppercorns and chili. The original water that the wontons are cooked in or the boiled chicken soup are also available.

6. Guo Kui (Crusty Pancake with the shape of a pot cover, or Guo Kui) 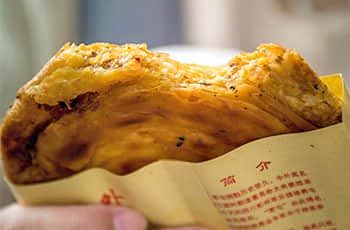 Sichuan's Guo Kui has a crisper outer layer than its brother Roujiamo from North China. Baimian Guo Kui, Jun Tun Guo Kui and Nan Bu Guo Kui are the three most commonly seen kinds. Baimian can be stuffed with vegetables and meat. So it is quite like what the people in the north do. Jun Tun is made of flour dough with minced meat kneaded into it. The finished Jun Tun is a golden color. Spicy Bean Jelly (Ma La Liangfen) and dishes such as Sliced Beef Tripe and Offal in Chili Sauce (Fuqi Feipian) can be stuffed into it, too. 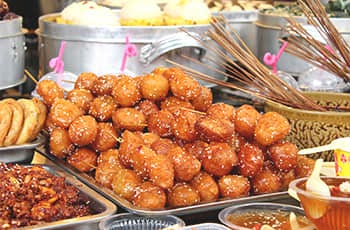 Deep-fried hollow dumplings with all white sesame stuffing sprinkled over are served on bamboo sticks. They look golden. And a bite of the crisp outside and glutinous inside is a delectable sensation. 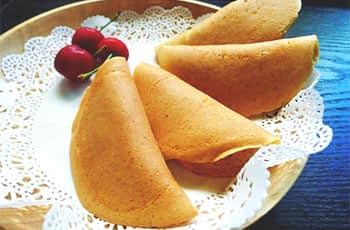 Add eggs and brown sugar to some fermented flour. Fry it in a pan and wrap it around salty or sweet fillings. The crust is crispy and the inside is soft. The fillings themselves are all time-honored snacks in Chengdu. 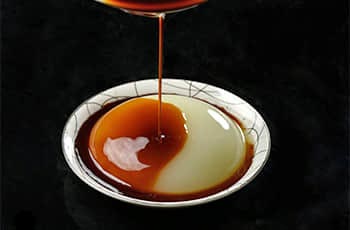 This Sichuan-style dessert has many options for its raw ingredients. The square or round block made from glutinous rice is submerged in cold water (to think of the old days when fridges were not invented). The refreshing product with brown sugar water is sold everywhere in the streets.

Characteristics: In addition to the traditional recipe, many new recipes have joined the menu, such Cool Rice Cakes made from mung beans, milk and red beans, coffee, green tea, coconut milk, as well as chocolate.
How to eat: Pour the brown sugar water over the cooled cake. Storage in the fridge would add to its flavor.

4． San Dapao (sticky rice balls, making a lot of noise in its process) 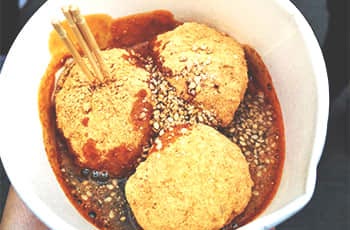 San Dapao is mainly made of glutinous rice and soy flour. As the dough gives out three lots of loud noises when thrown into the steel plate, it is called San Dabao (bombing for three times). Characteristics: the sweet and delicious Dapao never sticks to your teeth. For one helping, you could only get three pieces.