Cooking methods such as steaming, deep-frying, shallow-frying, baking, quick-frying, roasting and simmering are used to produce a variety of sweet and salty Beijing delicacies. Join us and learn some of the ones that are much-loved by Beijingers. 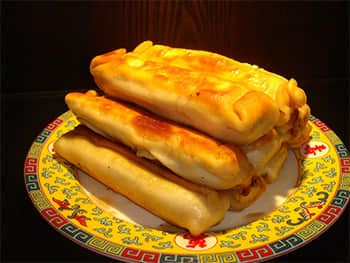 This kind of fried dumplings are probably known to all those who are local born and bred. The very first dā liàn huǒ shāo was served 300 years ago in the early Qing Dynasty. Now the time-honored foodstuff has become one of the renowned Beijing delicacies. Its thin wrapper, made of tender dough, becomes a crisp crust after shallow-frying and the fillings stay really fluffy, soft and savory.
Characteristics：It can be distinguished from other huǒ shāo (baked wheaten cakes) because of its frying process, as the wrapper and the filling are cooked together. An ordinary huǒ shāo would have its thick wrapper baked first and the filling stuffed later. As the shape of a dā liàn huǒ shāo resembles a dā liàn, a popular ancient Chinese pouch that is used for carrying money, it is said that fortunes can be expected by having a bite of it.
Recommendation: Zhuzhong Dalian Huoshao，Gulou Branch
Address: No. 55, Gulouxi Street, Xicheng District, Beijing
Zuoli Youshe Dalian Huoshao, Jiaomen Branch
Address: Ground Floor, Home Inn, Fengnanshijia Branch, Fengtai District, Beijing 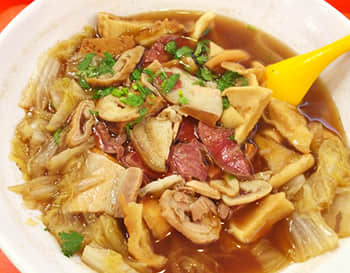 Luzhu dates back to a really long time ago. In Emperor Guangxu’s reign, the late Qing Dynasty, Suzaorou, marble meat was made in a quite delicate way, and was too costly for the masses. At the very beginning, pork head meat and edible offal were served instead. As time passed, white pancakes became the principal food which was boiled in the organ broth, which could include porcine bowel, lung, pig head meat and marinated bean curd. Those who are Beijing born and bred love luzhu.
Characteristics: The thick broth is a must-try for visitors. Even though its appearance is not that inviting, its taste certainly is.
How to eat: Dip the food out of the boiling pot and enjoy it while it is hot. White pancakes, as the principal food, can be taken at the same time.
Recommendation: Xiao Chang Chen
Address: No. 194, Nanhengdong Street, Xicheng District, Beijing
Beixinqiao Luzhu Restaurant
Address: No. 141, Dongsibei Street, Dongcheng District, Beijin 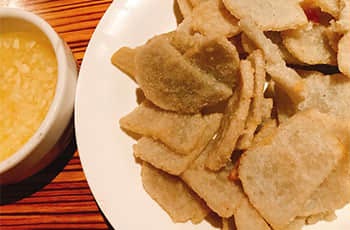 Guanchang is not meat sausage. To make it, you fry the sliced and steamed flour roll that is blended with water and seasoning. When the two ends are bubbling, spread with salty garlic sauce. It is crispy and tasty.
Recommendation: Lao Beijing Huashi Daye Guanchang
Address: Opposite to Tianya Jewelry City, Fahua Temple Street, Dongcheng District, Beijing

The bracelet shape fried ring is a traditional Beijing snack. It is a golden color and lovely and crisp. How to eat: Fried rings are often rolled in a pancake or accompanied with a fermented drink made of ground beans (Douzhir).
Characteristics:Appetizing and crispy 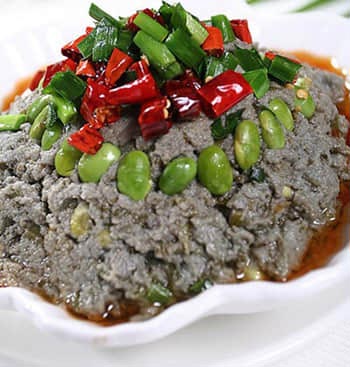 Add mutton fat, soybean paste, soy sprouts or mung bean sprouts to stir-fry the mung bean residue into a paste. Then spread the cooked red pepper oil around the dish. It tastes sour and salty and it looks red, yellow and green.

For Beijing Quick-Fried Tripe, sheep tripe is used. Sliced fresh tripe is boiled for a very short time and then taken out. Seasoning is used to dress it immediately. Nowadays cattle tripe is widely used as the base. How to eat: Just like instant-boiled mutton, bao du is boiled in the pot first and enjoyed with sauce. Garlic sauce, bruised ginger, rice vinegar and coriander can all be used to dress up bao du. Please chew it slowly to enjoy the savory taste.
Recommendation:
Laomenkuang Baodu Shuanrou (quick boiled mutton)
Address: No. 59, East Section of Jinbao Street, Dongcheng District, Beijing

Stewed Pig Liver is a well-known traditional snack made of pig's large intestine and pig's liver. Peculiarly, the major material is the intestine and the liver. It is made by stewing rather than frying (chǎo). As listed in the Beijing Breakfast menu, it has been offered for over a century.
Recommendation:
Tian Xing Ju Address: No. 81-83, Xianyukou Street, Qianmen, Dongcheng District, Beijing 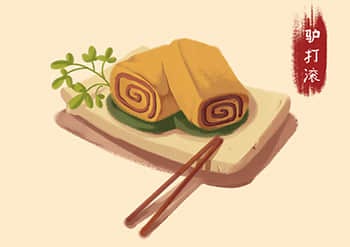 Stuff red-bean paste into millet dough to make a small round or square shaped cake; and then roll the cake with some light millet flour to keep the cake moist and tender. The rolling action is considered to be like a donkey (lǘ) rolling on the ground (dǎgǔn). The chewy and tender snack is well loved by the locals.

The body of an Aiwowo looks like it is covered in snow. It is full of the scent of Chinese yams and glutinous rice. The filling is loose and the taste is soft and sweet. It is a good dish for festivals. 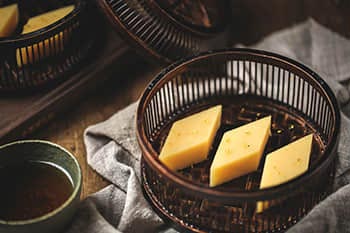 Yellow Pea Jelly is made of the finest white peas. They are washed, soaked, peeled and then grated, and the grated material is stir-fried. When it is cooled down into a large chunk of jelly, it is cut into pale yellow snacks. The sweet and aromatic delicate jelly is really cool and refreshing.

The porridge is mainly composed of millet topped with sesame sauce. Use the strainer to draw up the sauce and spread the sauce in circles all over the porridge. You could sprinkle salt or sugar on it, but the native Beijingers prefer it with spiced salt.
Characteristics: The key to the flavor is the sauce, which should be a mixture of 20% sesame sauce and 80% peanut sauce.
How to eat: Lift the bowl and sip the contents while turning the bowl. Natives have sesame sauce and porridge at the same time.

Kidney Bean Roll is Beijing's traditional name. It is mainly made of kidney beans. It looks white and it tastes soft, delicate, sweet and refreshing.

Chinese Cheese Wei is a time honored Beijing snack. But it was born in the Forbidden City. The once imperial dish in the Yuan, Ming and Qing dynasties is now served in the market. Cheese Wei is made of steamed milk and rice wine. The milk flavor and the light alcohol aroma really mitigate the summer heat. To taste the sweet, soft and aromatic refreshment is really pleasant.
Characteristics: The cheese should stay in the container and be kept upside down.
Address: Room 107, No. 202, Guanganmennei Avenue, Xicheng District, Beijing 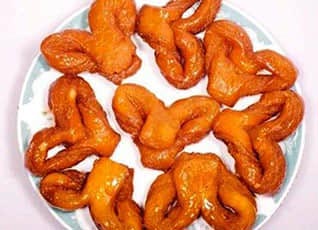 This nutritious snack is said to be inspired by western pasties. The round fried creamy cakes have a crisp shell and tender contents. It smells good and it can be digested easily.
How to eat: The powdered sugar should be added when it has just been fried, otherwise the crisp shell becomes soft and the taste is less than good when it gets cold.

This is also called a honey twist. It has the shape of an ear when it is fried. The color of the sugar ear is bright and buttery, and the texture is soft and sweet. 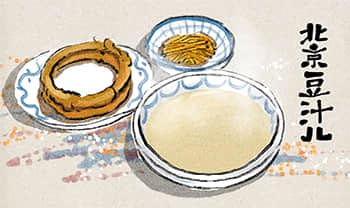 This is a is grayish green juice, made from the fermented mung bean mixture after the starch is screened out. It tastes sour and a little bit sweet, and it nourishes the stomach and improves the metabolism.
How to eat: The upper layer of Douzhir is weak in flavor and the lower layer has a stronger taste, which could only be sipped. Thin mustard, topped with spicy oil, and fried rings as accompaniments will bring out the sour, sweet, salty and spicy tastes gradually. Generally, it takes time to get used to the taste and so some choose not to try it.