The 10 Best Skylines in China

Every city in the world has a unique look and vibe that you can capture through photography. A skyline is like the fingerprint of a city – no two skylines are completely alike. They are shaped by artificial and natural features that rise to create a unique view of the sky as viewed from the ground. City skylines can show the face of the city in the most glamorous and inspiring way.

China has been growing at a very notable pace since the 1980s and with this growth has come the construction of tall buildings which measure over 200 meters tall. Five of the world’s 10 tallest buildings, and 44 of the 100 tallest, are in China, according to the Council on Tall Buildings and Urban Habitat, a Chicago-based organization specializing in the design and construction of tall buildings. In the last three decades alone, China has given the world magnificent skylines. Apart from well-known boom towns like Shanghai and Hong Kong, there are other cities in China with skylines that are worth visiting. Most provincial capital cities in China also have beautiful skylines.

Below are the 10 cities with best city skylines:

Home to more than 24 million people, Shanghai is the most populous city in the world. It’s gone through an enormous building boom since the early 1990s, with more than 10 buildings over 270 meters (885ft). The tallest building in its skyline is the 127-floor Shanghai Tower at 632 meters (2,073 ft), the second tallest building in the world. The most recognizable, however, is the Oriental Pearl Radio & TV Tower (468 meters/1535ft) which has 11 spheres (three of them are open to visitors), a revolving restaurant, and an impressive light display at night.

The skyscrapers of Pudong were designed to look impressive with the most eye-catching city skylines in the world!

The best place to photograph Shanghai is from the Bund or on a Huangpu River cruise. With the beguiling natural setting – the harbor and churning waters, the soaring, lush mountains and the jaw-dropping sunsets – Hong Kong has one of the most photographed city skylines in the world. It has more buildings taller than 150 meters (500ft) than any other city in the world. From the iconic portholes of Jardine House, which opened in Central in 1973, to the 484-metre-tall International Commerce Centre (ICC) that’s dominated the West Kowloon skyline since 2010, this is a city where the sky has never been the limit. The International Commerce Center is the 12th-tallest in the world. Probably the most famous icon of Hong Kong’s skyline is IM Pei’s Bank of China Tower which was finished in 1990.

And high-rises can be viewed from several different angles. The best vantage points are Kowloon waterfront, Star Ferry, Victoria Peak, and the rooms of the Ritz-Carlton Hong Kong hotel. The Intercontinental Hotel's Lobby Lounge, on the Kowloon waterfront, features panoramic views of the skyline which are unbeatable (if you don't mind springing for a $10-plus cocktail). 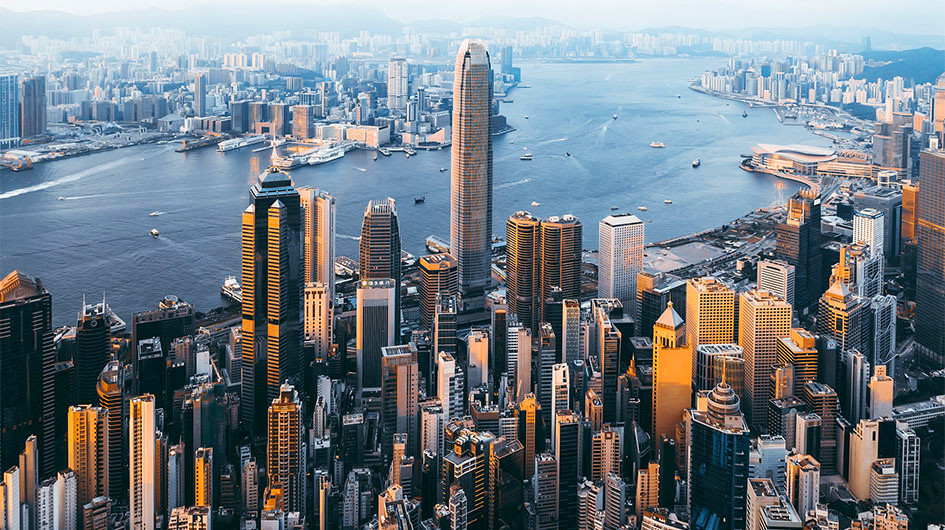 Except for 53 years, Beijing has been the capital of China since 1271 CE, but while its most famous architecture might be the historic Forbidden City and the Temple of Heaven, it’s also a modern metropolis. More than 70 skyscrapers have been erected since 1989. The central business district (CBD) has exploded into an area with a plethora of interesting examples of modern architecture.

Nicknamed China Zun because it takes its shape from a zun, a traditional ritual wine vessel, the 528 meter (1732 ft) CITIC Tower is the tallest building in Beijing. It is also the fourth tallest in the world.

The building that most epitomizes modern Beijing architecture is arguably the CCTV Headquarters building – a twisty, robotic structure that some have called a masterpiece of pure genius. Instead of competing in the race for ultimate height and style within a traditional two-dimensional tower 'soaring' skyward, CCTV's loop poses a truly three-dimensional experience, culminating in a 75-meter cantilever. The building is visible from most of Beijing. 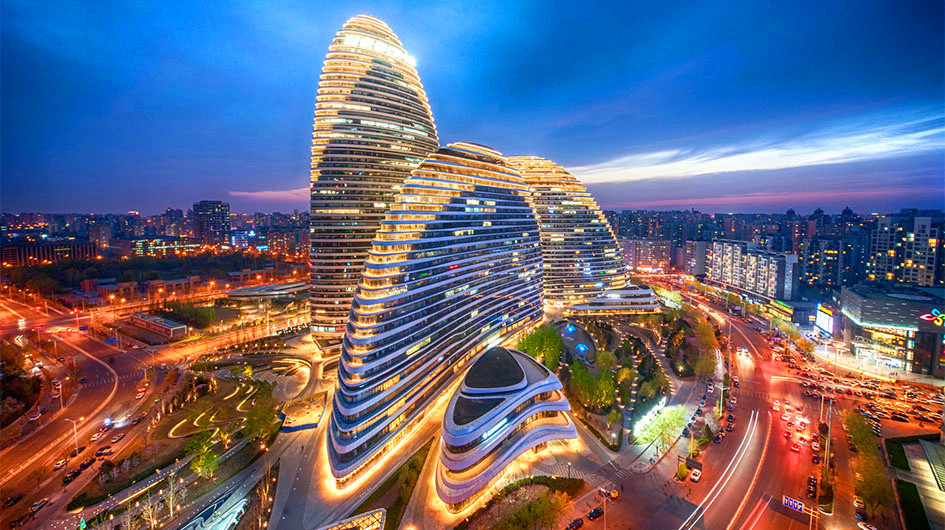 Guangdong, China’s richest province, is known as the country’s economic powerhouse for its advanced manufacturing businesses in the Pearl River Delta and vibrant cities like Shenzhen. Its capital city is Guangzhou. Historically known as Canton, Guangzhou is one of China’s biggest centers of trade. It is also one of the most important sci-tech, educational and economic centers in China. As such, most of this city’s skyscrapers are for business purposes. The Guangzhou CTF Finance Centre is the tallest building measuring 530 meters (1,739ft). This structure is the 3rd tallest in China and seventh tallest building in the world. The Canton Tower, used as an observation tower and a TV booster, is the tallest structure in the city. The booster that stands at 600 meters (1,968ft) is illuminated by thousands of LED lights at night. 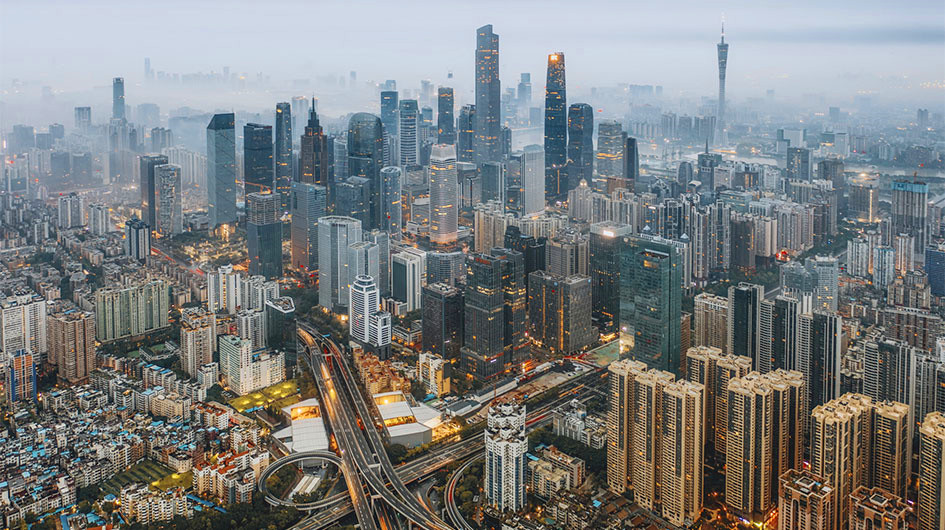 Chongqing is located in southwest China at the confluence of two rivers, the Yangtze and the Jialing. Chongqing is one of China's four direct-controlled municipalities (the others are Beijing, Shanghai, and Tianjin). Chongqing is home to 16 million people in its urban area. The city has been categorized among the thirteen emerging megacities in China. Until February 2020, Chongqing possessed more than 81 buildings that are 180 meters or taller. With such structures, the skyline is rising rapidly.

The most unique one of these skyscrapers is a building complex named Raffles City on the Chaotianmen riverfront. It is comprised of 8 towers, the tallest two of which are 354 meters (1163 feet) high (the highest building in Chongqing). The four adjacent towers are each 265 meters high, and the most significant feature is the super-long sky bridge right above those four towers.

The design was inspired by traditional Chinese sailing vessels, a nod to Chongqing's past as a trading center.

The best place to shoot the Raffles City on the Chaotianmen is Nanbin Road. 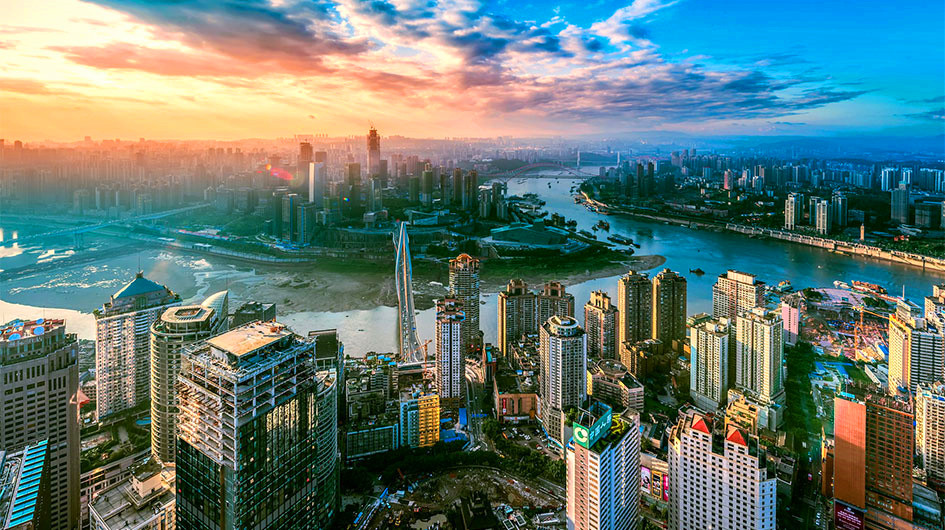 Hangzhou is an emerging technological hub and home to the e-commerce giant Alibaba. It hosted the eleventh G20 summit in 2016, and was once anointed the "finest and most splendid city in the world" by Marco Polo. It is considered an important manufacturing base and logistics hub for coastal China and its economy has rapidly developed since its opening up in early 1980s. 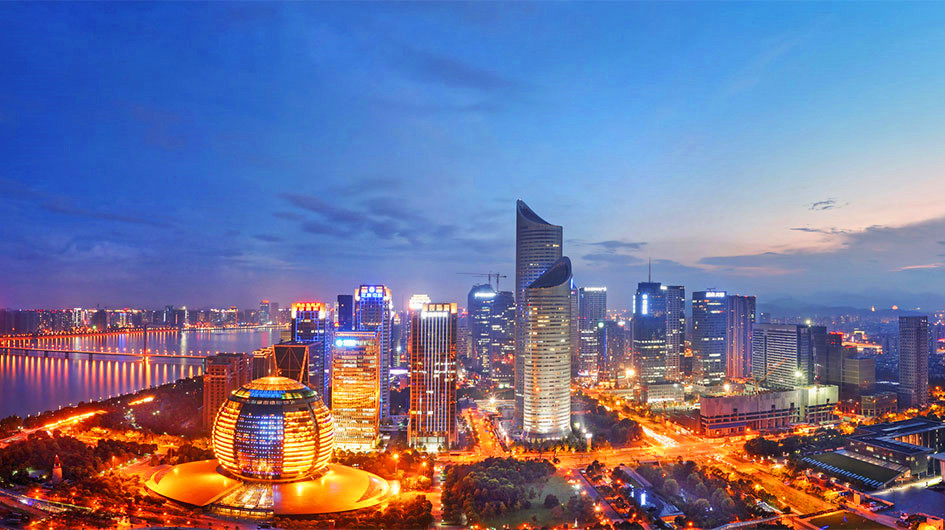 Nanjing is also one of the most important economic centers of modern China. It was home to 10 of 500 China’s largest corporations in 2020. It is not surprising that Nanjing’s contemporary architecture is so sophisticated. Among the recently built commercial towers, the Nanjing International Youth Cultural Center stands out for its elegance. In 2016, renowned Zaha Hadid designed the two towers and the adjacent conference center inspired by a sailing ship.

The Zifeng Tower which stands at 450 meters (1476ft) is the tallest building in Nanjing, and 18th tallest in the world. 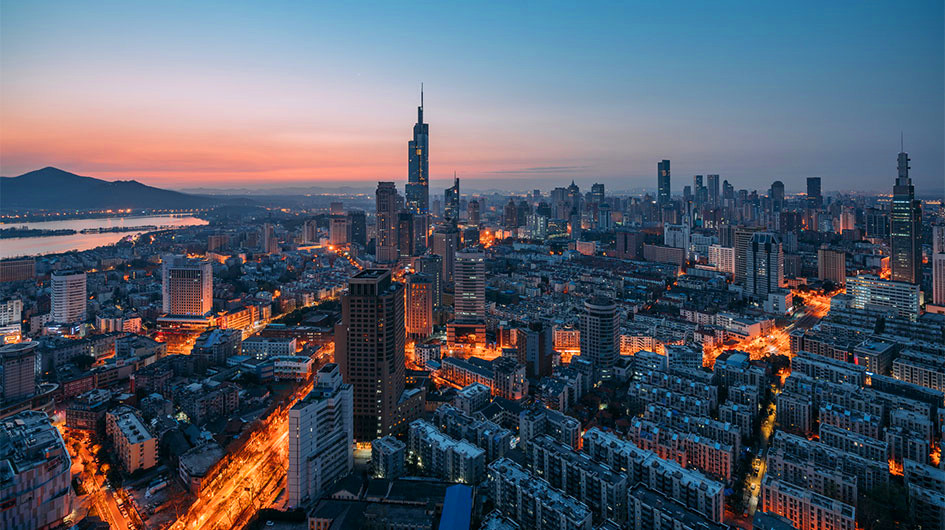 In 2020, Wuhan was arguably the most famous city in the world. It was remembered as the origin of the COVID-19 outbreak – despite the fact that the exact source of the coronavirus has not been confirmed.

Wuhan is capital and major industrial and commercial city of Hubei Province in central China. It is home to 8.3 million people. Wuhan has been compared to Chicago in terms of relative city size and industrial significance. The city is located where the Yangtze and Han River intersect. Wuhan offers remarkable views for lovers of skylines, thanks nonetheless to the tall buildings and their reflections on the water. There are 70 buildings over 200 meters (656ft) high in Wuhan. The tallest building dominating Wuhan’s skyline is the Wuhan Greenland Centre at 475.6 m (1,560 ft). This city, located along the west coast of the Bohai Gulf, has numerous skyscrapers – even more than its nearby neighbor of Beijing. They are only half an hour's distance apart by high-speed rail. There are three extremely tall skyscrapers in the city with the tallest measuring 597 meters (1958ft) tall. Punctuating the skyline is a telecom tower and ten other skyscrapers which are upcoming.

The super tall skyscrapers in Tianjin are mainly built or proposed to be built in two districts. One is the city center area, also known as Heping District, where the tallest completed towers are located. The other one is Binhai New Area, including Xiangluowan CBD, TEDA Modern Service District, and the Yujiapu Financial Center, which is located at the core area of Binhai New Area, where dozens of new skyscraper projects are ongoing. 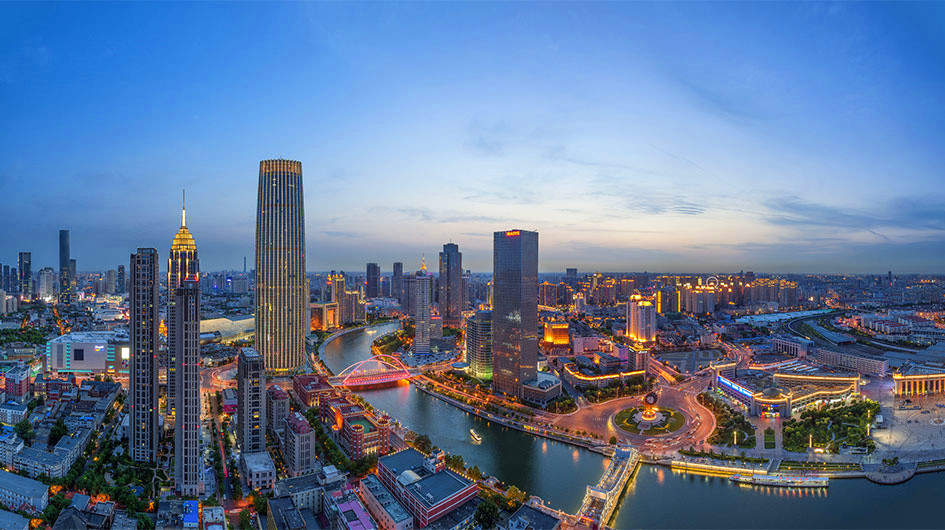 Shenzhen lies along the coast of the South China Sea and immediately north of Hong Kong. It is a young city which has flourished as China’s economy has transitioned. It was just a coastal village 40 years ago, but now it is an economic hub for Pearl River Delta. Shenzhen is the seat of the Shenzhen Stock Exchange, one of the two stock exchanges in China, with the other one being in Shanghai.

Shenzhen’s relationship with high-rises goes back to 1980, when it was declared as a Special Economic Zone. The decision meant that companies could operate with fewer of the restrictions of a planned economy. From the beginning, urban planners decided that it would be a city of skyscrapers. Shenzhen's growing skyline is simply part of its genes. Between the early 1980s and the early 90s, it had more tall buildings than any Chinese city. The Diwang Plaza, which was finished in 1996, stands at 383.95 meters (1259ft), and was the highest building in Asia then. At the moment Shenzhen is home to 130 buildings over 200 meters tall with the tallest being the Ping An Finance Centre which is 599 meters (1,965 ft) – fourth tallest in the world. Shenzhen’s skyline is growing rapidly, and is considered to be among the best in the world. 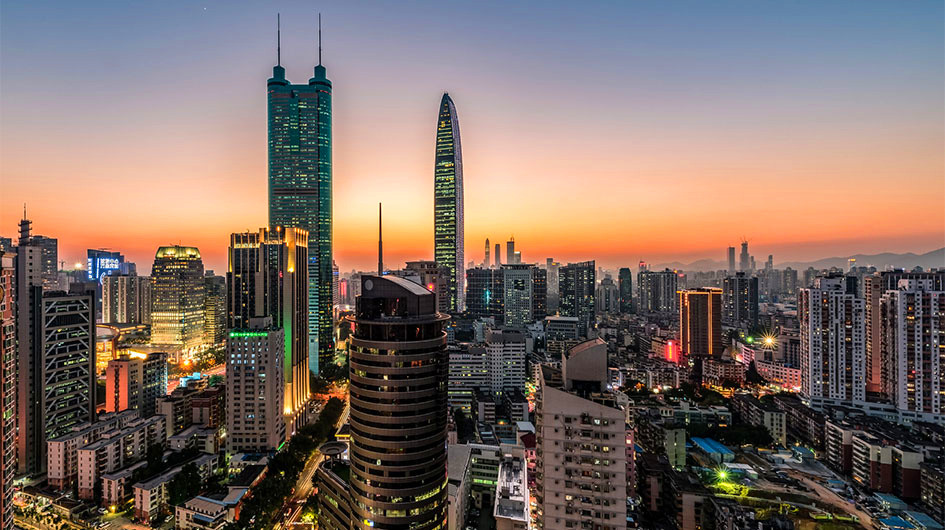 Skyscrapers were long seen as symbols of wealth and advanced technology, and as a means to maximize land usage amid rapid urbanization. But as they have grown ever taller, construction and maintenance costs have risen and assuring tenants’ safety in the event of fire has become even more difficult.

In total, 157 buildings over 200 meters were completed in China in 2019 according to the Council on Tall Buildings and Urban Habitat. But that trend will change soon. The Chinese government has issued a decree severely limiting the construction of super tall skyscrapers. The policy states that the country will "strictly restrict the construction of new buildings over 250 meters". "Generally, new buildings over 500 meters are not allowed to be built," it continued. The policy also highlights that new skyscrapers should have a focus on fire protection, earthquake resistance, and energy saving. Instead of pursuing big scale, imitating foreign architecture and seeking attention through the use of weird design, all cities should make their new buildings “suitable for use, economic, green and artistic”, the Ministry of Housing and Urban-rural Development said in its order. 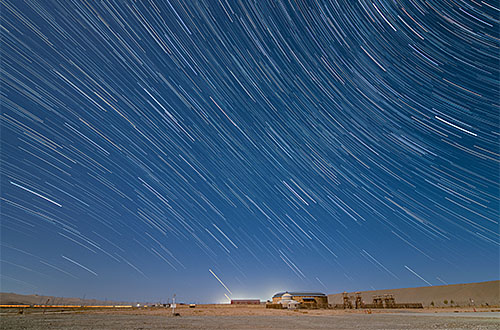