People praise Suzhou, describing it as “Heaven on Earth”. It’s a place with beautiful landscapes and prominent historical figures. Suzhou not only has enchanting scenery, but also delicious food. Suzhou dishes are generally on the sweet side and there are many varieties. After thousands of years of evolution,Suzhou cuisine now includes 12 varieties: Suzhou main dishes, sauced cold meat, pastries, cakes, sweets, fruit preserves, desserts, rice cakes and rice balls. You should come to Suzhou even just to experience the amazingly rich variety of the Suzhou cuisine. 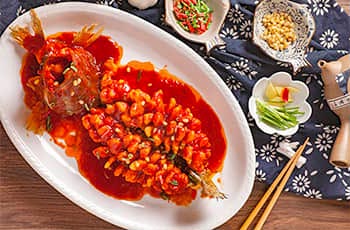 This dish is made of mandarin fish. It’s a traditional specialty in Song He Lou. This dish has more than 200 years of history, and is famous both at home and abroad, deserving to be called one of the most famous dishes in China. April and March are the best seasons for tasting the Squirrel Fish. 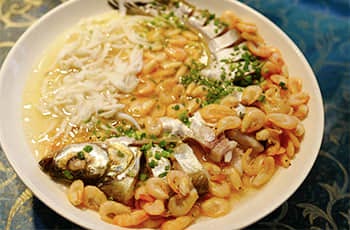 The Taihu Three Whites are the most famous local specialties of Taihu Lake, Suzhou: the white fish, the white shrimp, and the white bait. Usually the ingredients are steamed or scalded without any sauce to highlight the original flavor of the ingredients. 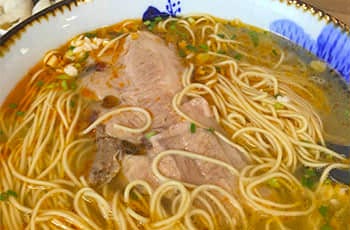 It has been praised as the “most complicated, most delicate, and most fresh-tasting” noodles in Suzhou. It is only served during the time between the two solar terms, the Beginning of Summer and the Beginning of Autumn, because apart from the usual meat bones and eel bones, vinasse (a byproduct of distilling sugarcane), and escargot (snails) have been added into the soup. The topping is a piece of a white-colored braised pork. A bowl of ‘Maple Town Noodle’ has to go through a complicated process before it’s served. Seasoning relies solely on salt, and no soy bean sauce is used, so the soup is white and clear, thus earning the name “White Soup Pork Noodle”.

The main ingredient is the liver of the spotted fish, which is boiled in light chicken soup with shredded ham, mushroom, and bamboo shoots. The spotted fish is white on the belly, and bluish-gray on the back. The fish has spot-patterns and is known for its fat and tender liver and fine flesh.

A traditional Suzhou cuisine. The pork is roughly the size of a cherry and the bright red color of the sauce gives it the name. The pork is often served with stir-fried pea sprouts arranged alongside the rims of the pan. Then the dish looks like a handful of cherries freshly picked from the tree. 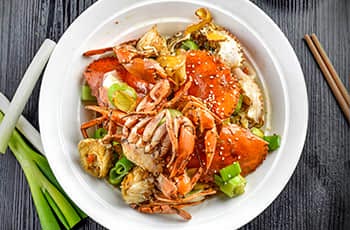 When we talk about Suzhou delicacies, Yangcheng Lake Crab must be mentioned. It’s rated as the “Crown of Crabs”. In China, people eat crabs following the rule “nine for female and ten for male crabs”. According to the Chinese lunar calendar, female crabs taste best in September, while the male ones taste best in October. Crabs are usually steamed and boiled in clear water. 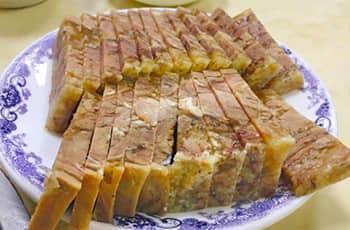 This is a time-honored dish. Suzhou cooks use unique braising and boiling techniques to cook the different parts of a goat and invented various dishes. Freshly killed goat is selected as the main ingredient. ‘Braised Mutton without Sauces’, the ‘Mutton Soup’, the ‘Mutton Cake, and the ‘Mutton Braised in Brown Sauce’ are the main varieties offered. These are cooked using traditional techniques. A series of new dishes have also been invented including the “All Goat Banquet”. On this banquet more than 30 mutton dishes are served, including cold starters, stir fried dishes, barbecue, roast, soups, and cakes.

Characteristics: Milky white soup with rich aroma. The mutton is supple but not mushy. The soup is fresh-tasting and not oily. You can eat this very often and still be amazed by the flavor every time.
Recommendation: Xu’s Cangshu Mutton Shop (Qiongling Road)
Address: Near the Nong Gong Shang Supermarket on Qiongling Road, Cangshu Town

A famous Suzhou dish made with Taihu specialties. The chicken soup tastes extremely fresh with the whitebait, and can be easily mistaken for fish soup. Adding egg white helps to filter out the impurities, making the soup light and clear. The smooth texture of the egg whites also goes well with the whitebait and water shield, providing an unforgettable taste.

A famous traditional Suzhou dish. The main ingredients are Jinhua ham and pine nut kernels. Jinhua ham is dark red and its cooking methods are rather complicated. The ham is said to have health benefits for the stomach and the spleen, and is nourishing for the body. Pine nut kernels, on the other hand, are rich in protein, and is thus effective in restoring the suppleness and luster of ladies’ skin.

Characteristics: The lean meat is tasty and salty, with a touch of sweetness; the fat meat is mellow but not oily. The dish is sweet and rich in flavor.
Recommendation: De Yue Lou Restaurant
Address: Building No.9, the International Entertainment Center, No.288, Jinshan South Road 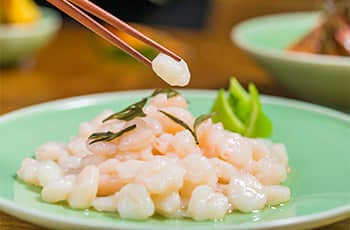 This is a famous traditional dish in Jiangsu, belonging to the Suzhou cuisine family. Its main ingredient is stir fried shelled shrimps. A lot of other materials can be added into the dish according to personal preferences.

11. The Local Eel Sizzling in Oil

Many Suzhou dishes use eel as the main ingredient, and the highlight of this dish is the “sizzling oil”. After the dish has been served at the table, the eel will still making cracking sounds in the sizzling oil. This dish starts with live eels. First, boil the eel in water, then remove the internal organs, heat the lard in the wok until it’s hot, then put green onion slices and the eel into the wok, and fry them thoroughly. Last, drizzle some vinegar on the eel and sprinkle some pepper powder.