A folk song in Suzhou sings:” Suzhou delicacies have so many varieties; sweet, fragrant, soft, crisp, and chewy; the Pan-fried Buns, the Steamed Buns, and the Crab Shell Pie; the Tiger Claw Bread and the Fried Dough Twist …” Suzhou people are particular and meticulous about food: the snacks, the desserts – everything is delicate and delicious, leaving the customers with a lingering aftertaste and a fond memory. 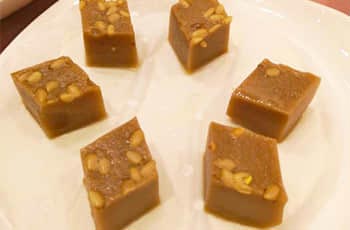 This is a snack sold in Suzhou around winter and spring. The traditional preparation method uses a lot of glutinous rice powder and water. The finished glutinous cake is served in a bowl, and people would use chopsticks to carve a small piece out of the cake and pull it apart from the rest of the cake, thus gaining the name “pull cake (paste cake)”. Later the cooking methods were improved. With less water, the cake can be cut into neat cubes and served in a pot. The cake cubes look elegant and taste delicious. 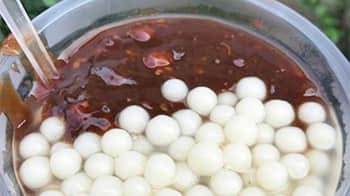 This is a traditional snack and consists of small glutinous rice balls served with red bean paste. One is red, the other is white: just like pearls sprinkled on red velvet. 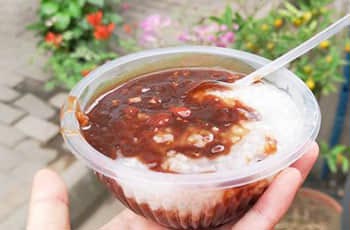 A children’s folk rhyme sings: “Do do do, here the sugar porridge comes”. The sweet, soft, aromatic, and glutinous sugar porridge evokes memories of childhood. Suzhou-style Sugar Porridge, also called Red Bean Porridge, is quite famous. Glutinous rice porridge is blended with red sugar, then poured into a bowl, covered with red bean paste. They are mixed before eating.

4. The Gorgon Fruit with Sweet Osmanthus 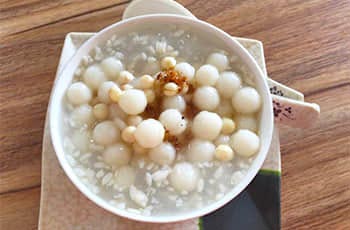 The Gorgon Fruit with Sweet Osmanthus is made of gorgon fruit (Euryale ferox), sugared Osmanthus, and soft sugar. It’s sweet, fragrant, and delicious, a well-loved dessert among the locals. In some stores selling southern specialties, you can also buy dried Gorgon fruits (also called Qianshi in Chinese). The dried ones are more suitable for tourists to take away. 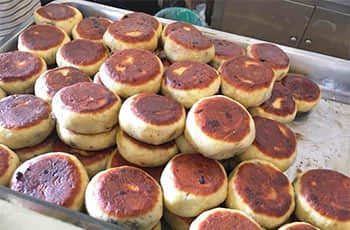 This is a seasonal pastry sold in spring. It mainly comes in two categories: ones with meat fillings and ones with vegetarian fillings. The vegetarian-filling ones are mainly rose, red bean paste, and peppermint cakes. The rose cake, with its white crust and red filling, is especially enticing. And it’s inexpensive. So it’s a good choice for visitors to take home as a gift. 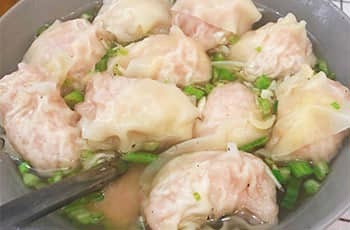 Small wontons are a common delicacy in southern China water towns. They can be found in almost every household. The nearly translucent skin is as thin as crepe, revealing the pink meat stuffing inside. Served in the most commonly-seen ceramic soup bowl. Sprinkle some shreds of fresh green onion, garlic shoots, tender and yellow egg skin on the clear soup, or add some seaweed (nori) and dried small shrimps – the soup tastes fresh and delicious, leaving foodies asking for more. 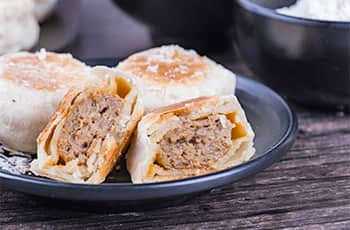 The most prominent feature of the Suzhou-style Meat Moon Cake is its layers and layers of hand-made crust. The layers are clear-cut and orderly. The key to making such a crust is the oil, and the best crusts are made using lard. The stuffing is pure minced fresh pork. Take a bite of that savory and juicy minced pork wrapped up in the crust, the broth will spill out and fill your mouth. 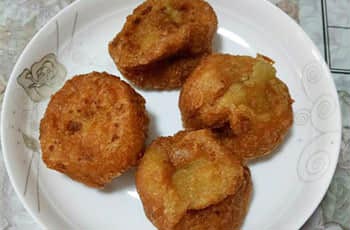 Also called the Compactly Fermented Steamed Bun, it is usually sold in winter, especially in the time before Spring Festival, when it becomes a popular gift among family members and friends. It’s also called the “Prosperity Steamed Bun”. “Compactly Fermented” means that when fermenting the dough, less yeast is added than usual, so after steaming the bun is not as soft and fluffy as the common buns.

Characteristics: Although after steaming the compactly-fermented bun is not as soft and fluffy as the usual buns, once it is fried in oil it will continue to swell and will become crisp on the outside and fluffy on the inside. The bun is juicy and savory with its meat stuffing.
Recommendation: Da'a Er Shengjian Restaurant (The First Heaven's Gate Alley)
Address: No.13 The First Heaven's Gate Alley (Di Yi Tian Men Alley), Guanqian Street, Pingjiang District, Suzhou (near the Da Guang Ming Cineplex) 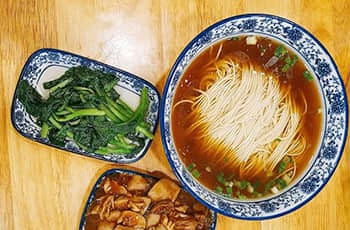 This noodle is an integral part of Suzhou people’s “Su-style Life”. The criteria for a good bowl of Red Soup Noodle lies in the soup: it should be clear, not oily, and fresh; and will not make people thirsty after drinking. The main ingredients are noodle, green onions, and eggs. Add seasonings like soy bean sauce, chicken essence, and pepper powder into the noodle soup, then pick up the noodle and put it into the bowl with eggs and green onions.