The Largest Public Park in the City

Seven Star Park is the largest comprehensive park in Guilin, covering an area of 137.4 hectares. The park has both natural and man-made landscapes. Looking down from the sky, the peaks of seven hills in the park form the shape of the Big Dipper, hence comes the name. Beautiful and spacious, the park has long become a tourist attraction since the Sui and Tang Dynasties. Many famous Chinese and foreign celebrities and government leaders, such as Deng Xiaoping, Guo Moruo and Clinton have visited the park. Seven Star Park has four gates. You are advised to reasonably arrange your visiting routes to avoid going back and forth. 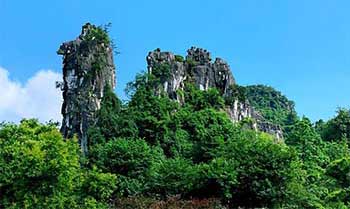 In July 1998, after the environmental protection forum held in the bonsai art gallery besides the Camel Hill, the former US president Mr. Bill Clinton delivered a speech on the lawn in front of the hill while shaking a Guilin folding fan and humorously calling it “energy-saving air-conditioning”. The speech sign stands right in front of the Camel Hill. Every day at dusk, when the light is cast on the hill, it is really a feast for the eyes. “Peach Blossom Hump” is one of the top ten attractions in Guilin. 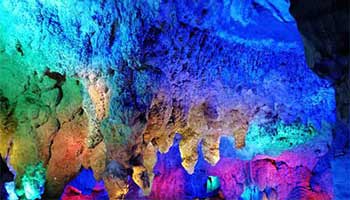 The entrance fee to Seven Star Cave of RMB 60 is extra cost. The cave is 1,100 meters in length, 54 meters in width, 27 meters in height, and has an ancient underground river with a history of 1 million years. For a long time, the rain water continues penetrating into the cave through the rock crevices to dissolve limestone and crystallize in the cave, thus forming stalactites, stalagmites, stone pillars, stone curtains and stone flowers of all forms.

The Seven Star Cave is divided into three layers. The upper one is the cave remnant and the lower one is an underground river which is still growing. Currently the middle layer is open for sightseeing, with the widest part of 43 meters, highest at 27 meters, and a length of 814 meters. The temperature of the cave remains at around 20℃. It includes 6 caves and 35 scenic spots. The whole cave is as magnificent as a fairy tale world.

If you have visited the Reed Flute Cave, you should visit the scenic spots of Seven Star Cave selectively. 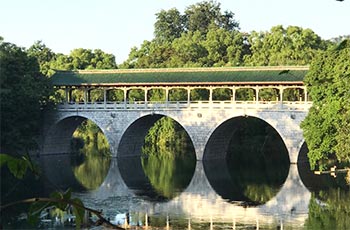 Built during the Jiaxi years of the Song Dynasty, Flower Bridge is the oldest bridge in Guilin. There is a corridor on the bridge. The bridge pavilion is covered with green glazed tiles and the body is made of rocks, with a strong ethnic flavor. It's also one of the landmarks in Guilin.

There is an artificial climbing site beside the Light of China murals in the park, which is a designated venue to hold the seeding match of youth rock climbing (Guilin Station).