The Oldest Canal in China

Xing’an Lingqu Canal in Guilin is an impressive project created by the working people of ancient China. It is a key historical site which is under state protection. Located on the edge of Xing’an country, the 34 km canal was built in 214 B.C. Along with Dujiang Dam and Zhengguo Canal, it is known as one of the three major water conservation projects in ancient China.

Why did Qin Shi Huang build the Lingqu Canal? 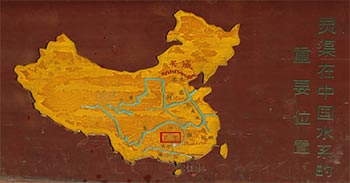 The map of Lingqu Canal

The Canal was built in order to create an efficient supply route. In 221 BC, Qin Shi Huang (the first emperor of the Qin Dynasty from 221 to 207 BC) unified the six kingdoms and established a new country. In order to crack down on the Baiyue Tribe in south China, he dispatched 500,000 troops to attack them. Before the excavation of Lingqu Canal, provisions and funds for the Qin Army were carried by manpower. Even if they used carriages, due to the treacherous terrain in Lingnan (now Guangxi Province in southern China) as well as necessary consumption of supplies along the way during transportation, the amount of grain arriving at the front line was greatly diminished. Besides, as the Lingnan area was sparsely populated at that time, and the Qin Army could barely find any food. They couldn’t win the battle without food.

After the construction of Lingqu Canal, the Qin Army had pulled together sufficient provisions and funds to forge ahead courageously and they unified Lingnan that year. Along Lingqu Canal, large numbers of immigrants were able to be moved from the central plain to Lingnan. It has speeded up the great fusion of peoples and improved the development of the Lingnan economy. Furthermore, it has strengthened cultural exchanges and played an important role in consolidating the frontier. 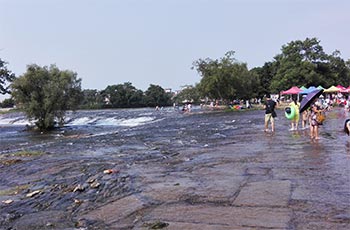 People walk across the balance

Herringbone-shaped Balances are the essential projects of Lingqu Canal. The effect of the Big Balance and Small Balance is that whether the upstream flow is large or small, the split-flow remains stable and balanced. A plowshare like building called Plow Beak is built in front of Balances, and protects the safety of the Balances and guides the running water for the north and south canals. You can reach the Plow Beak by ferry and most people choose to walk across the Big Balance dam carrying their shoes. We suggest you walk from the Balances to the Plow Beak and then ascend to the Lin Yuan Mansion to look out over the panorama of the water conservation project. The view pavilion of Lin Yuan Mansion is the best place to see the panorama of the water conservation project. You can clearly see the Xiang River and Lijiang River.

Water Street is a fusion of architecture of the Qin Dynasty style and Jiangnan water town. Li Jia Ancient Bridge, Three-General Tomb, Sculpture Gallery, Ma Si Bridge, Huguang Guild Hall and Folk Custom Street are located on both sides of the Water Street. You can see local people washing vegetables, laundering clothes and chatting at the riverside, living a quiet life. This is the back door of Lingqu Canal.