Covering an area of more than 40 acres, the Flying Tiger Heritage Park is a memorial park built on the former site of a command post of Yangtang Airport in Guilin. It was the fourteenth volunteer air force of America. 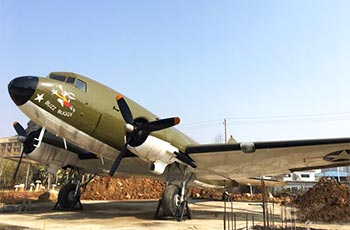 C-47 Aircraft in the park

There are nearly 300 historical relics related to “Flying Tiger”, such as uniforms, medals and old photos, all of which were donated by the Historical Committee of the Flying Tiger of the United States.

Learning about the history of the Anti-Japanese War

There is a time line in the memorial hall showing the exact time of some major events in the Anti-Japanese War, including the July 7 Incident of 1937, the Incident of January, September 18th Incident, and the outbreak of World War II, which provides a very good opportunity for visitors to learn about the history of China’s Anti-Japanese War.

The memorial hall introduces the birth of the China’s air force, records of the members of the Guilin air force, the birth of American Volunteer Group and Flying Tiger and their heroic deeds in helping China fighting against Japan.