One of the “Four Great Ancient Towns in Gaungxi"

The Daxu Ancient Town was founded around 200 BC. The ancient Daxu street runs along the Li River for 2 km, and the narrow street is paved with bluestones, flanked by well-preserved old folk houses. Daxu Ancient Town sits on the east bank of the Li River, to the south-east of the Fuzi Rock, and the north of the Mopan Mountain, 23km from Guilin through waterway. 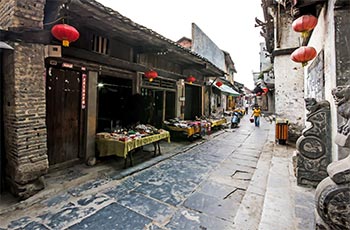 The stone-paved street was built in the early years of the Republic of China. It is 2.5 km in length, and 2 meters in width, with mostly blue stones as the pavement, consisting of around 15,000 pieces of blue stone; only 0.5 km of the street is paved with pebbles. The ancient styles are well preserved here. Houses along the street are all of wood-brick structure, with high eaves and long platforms. Shops are in the front and private rooms are in the back. As narrow and deep as bamboo tubes, these houses thus gained the name of the “bamboo tube houses”. Along the main street there were 8 alleys: the Laoxu, Diling, Longan, Xinglong, Tangfang, Gulou, Fuxing, and Siying alleys. Through the years the names of the alleys have changed much. Most of the houses in the alleys were built of black bricks and gray tiles, giving off a sense of history. 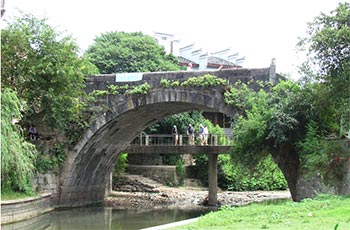 Originally built in the Ming dynasty (1364 – 1644) and rebuilt in 1899, the Longevity Bridge is a single-arch stone bridge standing at the junction of the Ma River and the Li River. The bridge looks firm, steady, elegant, and has a quaint simplicity. It is one of the key cultural relics under the county government’s protection. This rainbow-shaped single-arch stone bridge stands firmly and proudly across the Ma River (Jiansha River). With Siying Zhou on the east and the bluestone street on the west, it has more than 20 stone-steps built on both sides. The pavement of the bridge is made of embedded bluestone. Guardrails can be found on both sides of the bridge, and on the four corners there used to be four uniquely designed stone lions (destroyed in the Cultural Revolution). On the whole, the shape of the bridge is very aesthetically appealing.