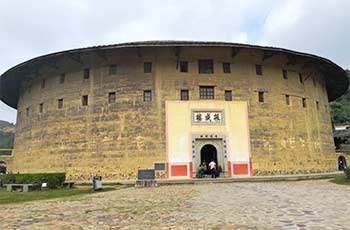 Situated at Hongkeng Village in Hukeng Town of Yongding County, Zhencheng Building is the most splendid among all of the Hakka earth buildings. Built in 1912 according to the layout of the Eight Diagrams, it is the most delicately designed Hakka earth building and is thus known as the Prince of Earth Buildings. Covering an area of 5,000 square meters, the building was completed in 5 years, costing 80,000 silver dollars. The building has two circles in its structure. The outer circle has four stories, each having 48 rooms. In each diagram of the total eight diagrams, there are 6 rooms. Each staircase separates part of the building into a unit. Diagrams are separated by fire-proof walls and connected by an archway. The ancestor’s hall is a stage where there are 4 big stone pillars which are 7 meters high and whose perimeter is about 2 meters. Around the stage is the inner circle of the building. The inner circle has 2 stories, each having 30 rooms. On the corridor of the second story, there are delicately designed iron railings. At the World Architectural Model Exhibition held in Los Angeles in the U.S. in April, 1986, Zhencheng Building, together with Yonghe Palace and the Great Wall, as three major representative buildings of China, had their models displayed at the exhibition. 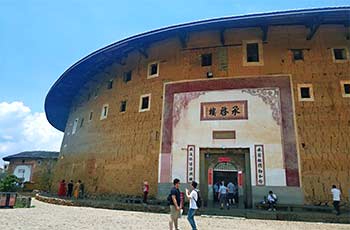 Located in Gaotou Town of Yongding County, Chengqi Building has the most circles in its structure, and houses the most residents among all earth buildings, making it the King of Earth Buildings. Built in the 48th year of Kangxi of the Qing Dynasty (1709), the building’s diameter is 73 meters, and the perimeter of its corridor, 229.3 meters. It is structured with three circles and a center. The outer circle has four 72-roomed stories, with a total height of 11.4 meters; the middle circle has two 40-roomed stories, while the inner circle has only one 32-roomed story. All the rooms of the three circles add up to 400. In the center of the three circles is the ancestor’s hall. The building covers an area of 5,376.17 square meters and could accommodate more than 800 people in its heyday, when the whole building looked like a small city in its own right. Wu Boxiong, a politician in Taiwan, once inscribed it as the “King of Fujian Hakka Earth Building” for Chengqi Building. In 1986, the Ministry of Posts and Telecommunications of China issued a set of stamps themed on the dwellings of Chinese people, among which the dwellings of Fujian people are represented by Chengqi Building. This set of stamps are appraised as the best stamps of the year in Japan.

Located at Shangyang Village in Gaopo Town of Yongding County and built in 1851 (the first year of Xianfeng of the Qing Dynasty), Yijing Building is the tallest earth building. It covers an area of 10,336 square meters, with its outer wall being 136 meters in width and 76 meters in length. The main 5-story building at the back of Yijing Building is 17 meters in height and has 267 rooms in total. 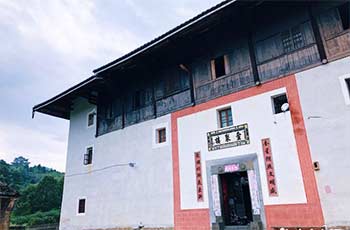 Situated at Hongkeng Village in Hukeng Town, Kuiju Building is a square earth building featuring the structure of a palace. Looking from a distance, the building looks like Potala Palace, while looking from above, the building combined with the ridge behind looks like a tiger that is about to jump down the mountain. The designer of the Kuiju Building was Wu Yifu, Hanlin Academician and the blood brother of the owner of the Building, Lin Kuiyang. Taking five years to finish its construction in 1834, Kuiju Building has a history of 160 years. Covering an area of more than 6,000 square meters and having a height of 15 meters, it is home to 24 households, which is 107 persons in total. In its history of over a hundred years, the building has nurtured 4 people passing the last round of the highest imperial examination, 4 officials of seventh class or above, more than 20 undergraduates and more than 40 overseas Chinese. Just as the couplets on the wall of the gate says, “Well-educated residents in Kuiju Builidng inject new blood, making the culture and life in the building more and more splendid and prosperous.”

Located at Hongkeng Village in Hukeng Town, the splendid Fuyu Building is an outstanding representative of Yongding’s mansion-styled earth building. Covering an area of more than 7,000 square meters, construction on the building started in 1880 and it took three years to finish.

Fuxin Building is situated at Xiazhai Village in Hulei Town. Built in 769, Fuxin Building has a history of more than 1,200 years, making it the oldest existing earth building of Yongding Hakka Earth Buildings. Covering an area of 1,275.76 square meters, the 4-story building is made from raw soil. Fuxing Building is not built on a stone foundation, which reflects the architectural techniques and forms of the ancestors in the Central Plains. This clearly shows the connection between the residents in the Yongding Hakka Earth Building and the Hunaghe River Valley. Therefore, Fuxing Building is also known as the living specimen of the Architectural culture of the Central Plains.

2. Tips for Photo taking: Although Hakka earth buildings here are beautiful for photo taking all year round, it is best to take photos during the time around Mangzhong (Grain in Ear) when the farmland around the earth buildings are irrigated with water, creating a very poetic picture.

3. If you come here during the Spring Festival, you are in time for many festive folk activities, like local weddings.