'To be either a good prime minister or a good doctor. '

In ancient China, there were no public hospitals as we have today. Many scholars hold that everyone should learn medicine so you can help your family members in case of sickness. You’ll not be a good son if your parents fall sick and you don’t know how to cure them. And you’ll not be a loving father if your children fall sick but you don’t know how to cure them. Many ancient doctors decided to learn medicine after his loved one cannot be cured by a doctor. In the case of Huang Yuanyu, a famous doctor during the Qing Dynasty (1644-1911), he suffered an eye condition in his early thirties but was misdiagnosed by a quack doctor that resulted in the blindness of one eye. He decided to learn medicine himself and became a famous doctor. Even the emperor invited him to work in the royal hospital.

In 1956, the Chinese government established four colleges specializing in Traditional Chinese Medicine in four major cities: Beijing, Shanghai, Guangzhou, and Chengdu. The year is viewed as a watershed in the formalization of TCM education in the context of Chinese higher education. Sixty years later, China has 42 mono-specialized TCM colleges/universities and 238 universities that offer TCM programs. Forty-six specialized universities offer master level programs and 17 offer programs at doctoral level. They all provide the courses in English. 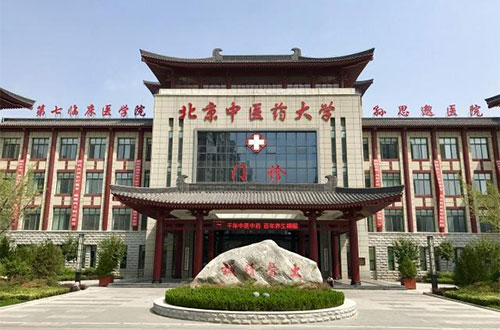 As one of the earliest key higher education institutions for Chinese medicine in the country, Beijing University of Chinese Medicine (BUCM) was founded in 1956 directly under the supervision of the Ministry of Education. Today, it delivers world-class instruction, training, and research across a wide range of subjects and is committed to offering the best possible educational, cultural, and social experience for its students.

BUCM consists of 13 schools and offers degree programs at an undergraduate, graduate, and post-doctoral levels in Chinese Medicine. It is home to over 22,000 students from different backgrounds, 15 percent of which are international students from about 52 countries and areas.

Currently, the university has 16 undergraduate disciplines, covering areas of medicine, sciences, engineering, economics, and the arts, as well as 24 master degree programs and 19 doctoral degree programs. In 1974, GZUCM began receiving foreign students and students from Hong Kong, Macau, and Taiwan, and each year hundreds of students from 113 countries and regions come to study at the university. Set up in 1956, Guangzhou University of Chinese Medicine (GZUCM) is one of the four earliest TCM higher education institutes in China and one of the first higher education institutes approved to award master and doctor degrees in the country.

SHUTCM now has 19 subsidiary colleges and departments, five affiliated hospitals, and 20 independent or affiliated research institutes. It has more than 8,200 students, including 800 international students in academic degree programs and more than 1,000 short-term students from 30 countries and regions. Founded in 1956, Shanghai University of Traditional Chinese Medicine (SHUTCM) is one of the four earliest key universities on traditional Chinese Medicine studies in China. Boasting well-established disciplines, a group of celebrated experts, and well-integrated clinical and scientific research centers, the university has a leading role among TCM colleges in China.

The school has become a leading university of higher TCM education in the country. It serves as a WHO Collaborating Center for Traditional Medicine and a Ministry of Health-designated International Acupuncture Training Center. The school has 17 undergraduate majors, 29 master programs, and 22 doctoral programs. There are currently more than 15,000 full-time students, 900 of them are international students or students from Hong Kong, Macao, and Taiwan. Established in 1954, Nanjing University of Traditional Chinese Medicine (NJUCM) is the oldest established university of Traditional Chinese Medicine in China. As a founder and advocator of TCM higher education, NJUCM enjoys a reputation as "the Cradle of Chinese TCM Higher Education" both at home and abroad.

The Pantheon of TCM Doctors in Ancient China

In China’s long history there are so many well-known doctors of Traditional Chinese Medicine. Due to their outstanding contribution in this field, Chinese Medical Theory can be developed very well and still cherished today. Let us check out the most famous TCM doctors in ancient China and extend our salute to them. Qin Yueren is the most famous doctor in ancient China. It was known that he was gifted with remarkable abilities from a deity. The story states that he was given a packet of medicine which gave him the ability to see through the human body. He thereby became an excellent diagnostician with his x-ray likeability. He was given the nickname "Bian Que" due to his skills. Bian Que was a miracle-working doctor in ancient China.

According to historical records, Bian Que is referred to as the author of Bian Que Nanjing (Internal Classic of Bian Que), aka Classics of 81 Difficult Issues, which attempts to clarify the difficult sections of the Huang di Neijing (The Yellow Emperors Inner Canon).

Hua Tuo was an ancient Chinese physician who lived during the late Han Dynasty and Three Kingdoms era. It was recorded that he was the first person in China to use anesthesia during surgery. He developed a kind of anesthetic called “Ma fei san” (麻沸散), which is a mixture of wine and herbal medicines. He also created the Wuqinxi or “Five Animals Play” from imitating movements of the five animals – tiger, deer, bear, monkey, and crane. Zhang Zhongjing (150—219CE), was one of the most prominent Chinese physicians during the Han Dynasty. He summed up the previous medicinal experience and established therapeutic principles in TCM. His medical book “ShānghánZábìngLùn” or known as “Treatise on Febrile and Other Diseases” The original work was later edited and divided into two books, Shang Hanlun (Treatise on Febrile Diseases) and Jin Guiyaolue (Jingui Collection of Prescriptions). Today, Zhang’s work remains highly regarded and important in the practice of Chinese medicine. They are a must-read for the profession and the laity.

Ge Hong was a physician, naturalist, and pharmaceutical chemist, and Daoist in Jin Dynasty. He was the first to write about using Artemisia Annua to cure malaria in his Handbook of Prescriptions for First Aid (肘后备急方 zhǒu hòu bèi jí fāng) when he served as a Taoist priest in Luofu Mountain region in southern China. Inspired by Ge's book, the Chinese scientist and phytochemist TuYouyou (first Chinese Nobel laureate in physiology or medicine) and her colleagues successfully obtain pure substance of Qinghaosu, now known as Artemisinin, used to treat malaria, saving millions of lives in the world. 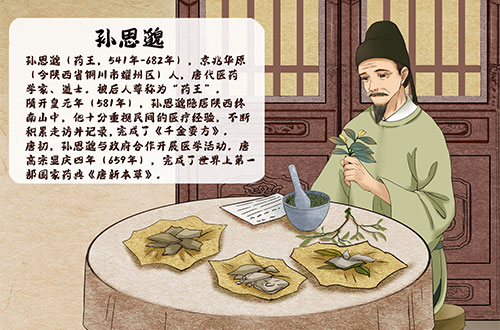 Sun Simiao lived in the Sui and Tang dynasty. He was called “King of Medicine” for his great contributions to Chinese medicine. Sun wrote two TCM classics – Prescriptions Worth a Thousand Gold (备急千金要方 bèi jí qiān jīn yào fāng) and Supplement to Prescriptions Worth a Thousand Gold (千金翼方 qiān jīn yì fāng) – the two books summarized the pre-Tang Dynasty medicine and both were milestones in the development of Chinese medicine. The information about the medical practice that he recorded influenced all subsequent generations of Chinese scholar-physicians. Sun's books also had a strong influence on the Japanese practice of Chinese medicine, which had become popular in the 8th century. In the 10th century, a Japanese physician compiled a book, the Ishimpo, largely based on the Qianjin Fang, selecting 481 formulas from it. It became a required textbook for the study of medicine in Japan.

Qian Yi was a famous pediatric doctor during the Northern Song Dynasty. His work “The Key to Therapeutics of Children’s Diseases (小儿药证直诀 xiǎo ér yào zhèngzhíjué)” was the first pediatric book in China, which sums up treatment methods for different pediatric syndromes. The book was regarded as a classic pediatric work and he was honored as “the Father of Pediatrics” in later generations.

Song Ci (1186-1249CE) was an official of the Southern Song Dynasty is best known for writing Collected Cases of Injustice Rectified (洗冤集录 xǐ yuān jí lù), a work often hailed as the world’s first systematic treatise on forensic medicine. The “Collected Cases of Injustice Rectified” teaches readers how to determine a person’s cause of death, as well as how to properly conduct an autopsy to avoid falsified results. Most important of all, it instructs the reader how to tell the difference between self-inflicted wounds and injuries sustained while fending off an attacker. Song was viewed as a founding figure of the modern forensic sciences in China and, in the boldest claims, across the globe. 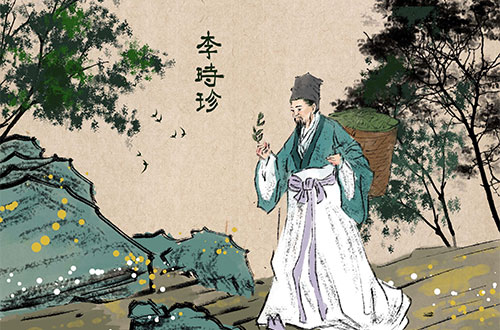 Li Shizhen was a great herbalist and acupuncturist in Chinese medicine history. He compiled a highly influential materia medica, the Compendium of Materia Medica(本草纲目 běn cǎo gāng mù), which described 1,892 medicinal substances (1,094 from plants; 444 from animals, and 275 from mineral sources) and presented directions for preparing some 11,000 prescriptions. It was considered the most important and influential text among the Traditional Chinese Medicine community. Its prominence in the field has led to its translation into over 20 languages since its writing in the mid-16th century AD. It took him 27 years to finish this great book.

Dr. Ye was born into a family of Chinese Medicine doctors. His grandfather and father were both famous doctors in their time. He started learning Chinese Medicine from his father when he was 12. Dr. Ye was 14 when his father passed away. He continued his study of medicine with Mr. Zhu, one of his father’s apprentices. Ye was so intelligent that he quickly learned everything Mr. Zhu could teach him. Thereafter, Dr. Ye began searching for outstanding doctors from whom he could learn more. Within 10 years, he had been taught by 17 teachers.

He is best known for proposing that feverish diseases progressed along four stages, a theory he laid out in his book Discussion of Warm Diseases.

Visit a TCM hospital is just like visiting a modern hospital; you just follow the normal procedure: registration and wait in line. The doctor will use the four diagnostic methods to detect your illness, and then the doctors will assign different treatments for different diseases. The treatments can be a prescription of Chinese medicinal herbs, which will come in bags of bitter medicine to drink, acupuncture, cupping, gua sha, and accompanied by food therapies. We listed the top TCM hospitals in China below. You can also visit a TCM hospital or TCM department of a modern hospital n the city you visit.

Guang' AnMen Hospital of TCM Beijing is a general TCM hospital affiliated with the China Academy of Traditional Chinese Medicine. It is a TCM hospital for conducting clinical practice, scientific research, and teaching, coupled with specialties in many departments. It is the national TCM Center of Cancer, Diabetes, and Anorectal Diseases approved by the State Administration Bureau of TCM.

Xiyuan Hospital is a large integrated AAA-grade TCM hospital that integrates medical services with scientific research, education, and health-care comprehensively. It is also the On-line International Emergency-aid Center of the Ministry of Public Health of China, the TCM training site for western doctors authorized by the Ministry of Public Health of China, the clinical teaching and practice base for Beijing University of Chinese Medicine, and the teaching site for International Acupuncture and TCM Education. Xiyuan Hospital is an important foreign exchange window of China and an important base for the external dissemination of TCM culture. 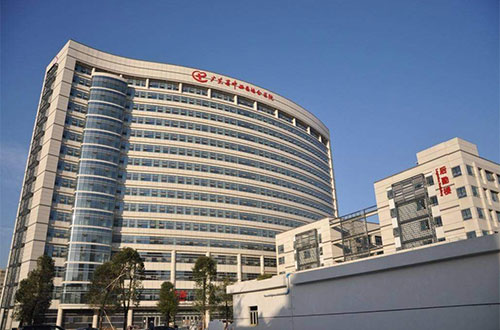 The hospital has used a combination of Traditional Chinese Medicine and Western medicine to treat SARS patients in 2003. Patients who received TCM treatment, their condition stabilized, with no side-effects, as well, no deaths reported from using this treatment.

Founded in July 1960, Longhua Hospital Shanghai University of Traditional Chinese Medicine is one of the four oldest TCM clinical centers in China. For over 50 years, Longhua hospital has been dedicated to the development of TCM and is known nationwide for outstanding patient care provided by its physicians and staff. With the distinguishing feature and prominent advantage of TCM, Longhua hospital serves as an institute-affiliated medical center that combines health care, education, and scientific research.

It is regarded as an exemplary national model TCM hospital and is categorized as a grade Three Class A hospital.