How to Plan a Tour of Zhangjiajie

Located in the northwest of Hunan Province, Zhangjiajie has been known to western countries since 2010 due to the movie Avatar. It consists of two districts, Yongding District (the city downtown) and Wulingyuan District (the scenic area). Tianmen Mountain in Yongding District and Zhangjiajie National Forest Park in Wulingyuan District are the two must-sees for visitors. It has the largest quartz sandstone landform of nearly 400 square kilometers, which makes it a paradise for photographers from home and abroad.

The Best Time to Go

Located in mid-subtropical zone, Zhangjiajie has four distinct seasons: a comfortable spring and autumn, a rainy summer and a cold winter.

The best time to visit Zhangjiajie is in September and October when the temperature is the most comfortable.

During the raining season, from April to June, it rains a lot and photo taking can be difficult because it is quite misty.

It’s hot and crowded in July and August, and so it is not recommended for you to come then.

Winter is very chilly but it is best time to come if you want to avoid crowds. 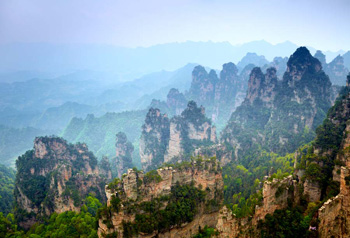 Golden Whip Stream is the best choice for hikers to explore the old forest.
Yangjiajie, the newly-developed section, is famed for the narrow and towering natural walls of rock.
Tianzi Mountain, north of Wulingyuan Scenic Area, is the most picturesque area with its pointed peaks.
Tianmen Mountain, 8KM from city center, is famous for a having naturally shaped cave going through the mountain. The longest cable car in the world could take you from the city to the top of the mountain. 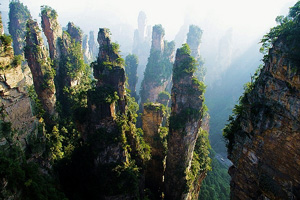 Day 1 Zhangjiajie Arrival
Upon arrival at Zhangjiajie Hehua International Airport or the train station, your personal tour guide will be waiting for you outside of the luggage claim area. You will be transferred straight to your hotel for a good rest.

Day 2 Explore the Forest Park (B,L)
An early start is recommended to avoid big crowds. Your first stop is Wulingyuan Scenic area. You will take a cable car up to Tianzi Mountain and be fascinated by the oddly-shaped hills and peaks. Your guide will accompany you as you stroll around on top of the mountains to appreciate its beauty. Continue to Yuanjiajie Scenic Area for The Hallelujah Mountain after a simple lunch. 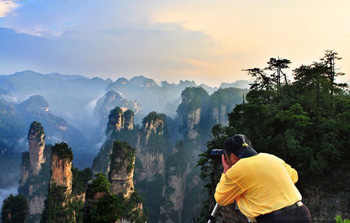 Day 3 Un-spoilt Yangjiajie (B,L)
Yangjiajie is a newly opened area in the National Park. The flat rock formation is shaped like natural walls. Its enchanting landscape has become widely known throughout the world in the last 2 years. Your guide will take you to the best spots for photo taking. Lunch will be served in local restaurants on the mountain again. In the afternoon, take a cable car to the foot of the hill and continue to hike along the Golden Whip Brook. It is the best way to enjoy the quietness and nature’s masterpiece.

Day 4 Tianmenshan and Departure (B)
Today you will experience the longest cable car in the world as you visit Tianmenshan. The cable car, the scary glass walkway and the 99-bend driveway is so impressive that you will never forget it. After the tour is completed, you will be transferred to the airport or train station for your next destination.

Zhangjiajie can be accessed by various means from major cities in China.