This ancient city is not only rich in ethnic cultures, but also its variety of dietary habits. The different climates in different parts of Lijiang give rise to diversified delicacies from agricultural products. 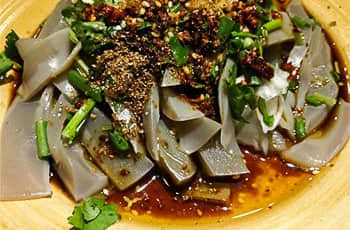 The main ingredient of this much favored traditional food got its Jidou (chicken pea) name from its shape like the head of poultry. The beans are milled into a grayish green vermicelli. It can be made into a salad or a fried dish. The refreshing dish is loved by the Naxi people.

Characteristics: When it is summer, it is served as salad, and in winter, it is served after being cooked.
How to eat: The jelly salad with vinegar, soy sauce and other seasonings is served in the hot summer. When it is fried in the pan with sesame oil, it is a warm dish for cold days.
Recommendation:
Xiao Chuxi Private Dish
Address: No. 6, Upper Section of Zhenxing Lane, Wuyi Street, Old Town, Lijiang, Yunnan Province, China.

The lard meat around the guts is the food by Pumi, Naxi and other ethnic groups. The slaughtered pigs are eviscerated first and the bones are then removed. Salt and peppercorn are spread in the abdominal cavity and the pig is sewn up. As the shape looks like the Chinese lute, Pipa, it is also called Pipa Meat.

Characteristics: It looks greasy, but it really tastes refreshing and aromatic.
Recommendation:
Foodie Hall
Address: Lugu (a lake in the valley as put in local Mosuo Language) Lake Scenic Area, opposite to the parking lot of Daluoshui Village near Lugu Lake. 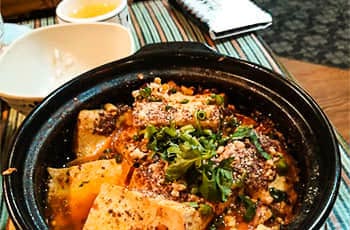 This is the delicacy of Jianshui County in Honghe Hani and Yi Autonomous Prefecture in Yunnan Province, which is quite close to the national border of southwest China. The main ingredient is tofu. Pick out the cooked tofu and slowly bake it with charcoal. The best delicacy is with no oil. Add the dried chili over charcoal, peppercorn, fennel seeds, peanuts (milled), sesame seeds, salt and MSG. The aromatic dish is eaten immediately when it is just served.

Characteristics: The outer skin is tender and crisp, and the interior is delicate and soft, as if it is liquid.
Recommendation:
A Bite of Baojiang Tofu (at Dayan)
Address: No. 67, the crossing of Xinyi Street and Jishan Street, Old Town, Lijiang, Yunnan Province, China

Sprinkle the fried potatoes with pepper powder, chili powder and cumin powder. The spicy, sour or curry flavors can be chosen by guests. The aromatic dish is a must-try. It is crisp outside and soft inside.

Characteristics: After being fried and dressed, the aroma of the potatoes is greatly enhanced. It becomes very attractive.
Recommendation:
Food Guardian (Lugu Lake Branch)
Address: Lugu (a lake in the valley as put in local Mosuo Language) Lake Scenic Area, opposite the Rural Credit Cooperatives near G307 Expressway of Daluoshui Village near Lugu Lake.

Blown liver is the commonly used cooking method for pig’s liver by various ethnic groups in the northwest of Yunnan (Bai, Dai, Naxi, etc.). First, they blow into the fresh pig liver with an inserted straw to inflate it. Then they remove the straw and steam the pig liver. When it is cooled down, they slice the liver. Blown Liver is served as a salad with coriander, soy sauce, vinegar, pepper, MSG and salt. 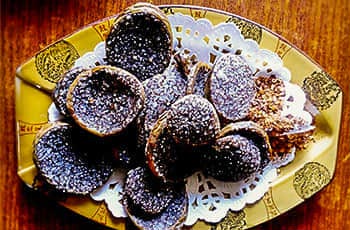 This is a unique delicacy in Lijiang. The ingredients such as pig’s blood, rice and all the seasonings are mixed in a certain ratio. Then they stuff all the above into pig intestines to make the rice sausage.

Characteristics: It has a dull color but its taste is thick. It is considered very nutritious.
How to eat: it can either be fried or steamed. 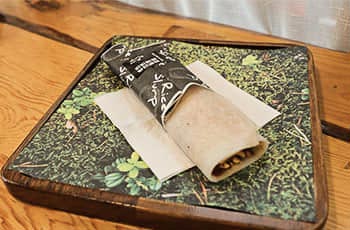 Erkuai (rice slurp) is unique to Tengchong, Yunnan. Quality rice is processed into all shapes by pinching and molding. Erkuai is made of high-quality rice. It has to be washed, soaked, steamed, mashed, and kneaded into various shapes.

How to eat: Erkuai can be made into diced, shredded or sliced shapes. It can be fried, boiled, stir-fried, marinated, steamed or deep fried.
Recommendation:
Rice Slurp
Address: No.43, Chongren Lane, Qiyi Street (near the intersection of Yinyu Xiang and Zhenxing Lane), Old Town, Lijiang, Yunnan Province, China

Buttered Tea is the drink exclusive to Tibet, China. It is often eaten together with zanba, a roasted barley flour. It helps fight against the cold and is refreshing. People can also drink it when they feel thirsty. This beverage is made with yak butter and strong tea. First, they put a certain amount of yak butter into a special bucket and add salt as well as thick, cooked tea. They use a wooden handle to mix it repeatedly. Then the yak butter is quickly melted with tea and looks like milk. Some other ethnic groups adjacent to the Tibetans also share this habit of drinking buttered tea.

Characteristics: It is mellow and not greasy. Local people may offer it when the weather is cold, when you have a lot of meat or when you are either hungry or tired.
Recommendation:
A Ma Yi Naxi Snack (Xiao Shiqiao Branch)
Address: No. 18, Lower Section of Zhenxing Lane, Wuyi Street, Old Town, Lijiang, Yunnan Province, China 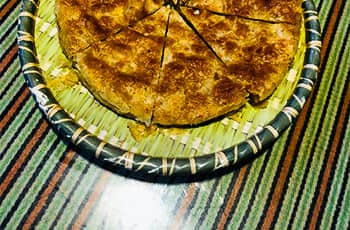 This Naxi specialty has a long history. In addition to its aroma, the brown glutinous paste looks really attractive. Ingredients include fine wheat flour and spring water from the snow water from Yulong Snow Mountain. Sesame seeds, walnuts and other seasonings are added into the dough. It is then baked in the pan with a slow fire. It can be served when it is golden.