an ancient town that dates back 1000 years

Xitang enjoys the location of the junction of Jiangsu, Zhejiang Provinces and Shanghai. The transportation is convenient as it is 90 kilometers east to Shanghai, 110 kilometers west to Hangzhou and 85 kilometers north to Suzhou (Jiangsu Province). Xitang was included in the Tentative list of China's World Cultural Heritage by National Cultural Heritage Administration. It is also one of China's first batch of historical and cultural towns, the national AAAAA (5A, top)-level tourist attraction. It won the World Heritage Protection Outstanding Achievement Award. Xitang has a long history and is one of the birthplaces of ancient Wu Yue (two ancient countries in China) Culture.

It is a real pleasure to watch the stream of wooden boats passing under bridges, look over the eaves of the ancient communities, or meander along under the shelter of the local shed corridor, or covered walkway. It is common to see the aged residents doing their washing at the riverside or playing chess under the wooden ceilinged shed corridor. Xitang features hundreds of ancient bridges and lanes, and there are gallery sheds (Lang Peng, roofed streets, also known as “rain corridors”, or Yu Lang). Many sheds have shops and stalls selling specialty products, accessories and snacks at one side and with a river on the other side. 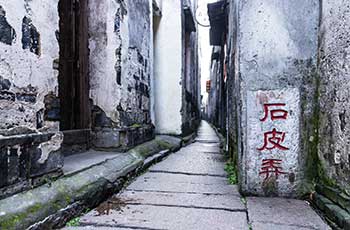 This is a lane formed by two families sharing the same surname: Wang. The lane is paved with 216 stone slabs. With a total length of 68 meters, and a narrowest point of only 0.8 meters, it is the longest lane in Xitang. The deep, narrow lane has skin-thin stones. Therefore, it is named Skin Stone Lane. Today, people who love the path paved with stone slabs like to visit the well-preserved lane.

This house is also called Wang House because the hosts are all descendants of Wang Yuan, also known as Wang Zhai, General of Imperial Guards during the Song Dynasty. The whole house has seven suites as well as a garden, which is typical of the architecture of the Ming and Qing Dynasties. The first suite is the “lobby”, then the connecting hall and the Good Karma Hall. A long lane links the whole house. The name of Good Karma Hall is given to urge the descendants to do good deeds. As people believe that the practice of good deeds is just like sowing seeds of melons, the virtue itself is the reward.

The site of the West Garden is in the Jijia Lane of West Street. It was owned by a Zhu Family (a royal relative) and later transferred to a Sun Family. The current West Garden is a new park built in 1993, in which exhibits pay tribute the poetic group South Society as led by Liu Yazi (one of the best poets in Republic of China and People's Republic of China, maybe next to Mao Zedong). Tourists may find the “Nianci Calligraphy Fan Art Museum”, “Hundreds of Seal Hall” and “South Society Showroom”. In the West Garden, the trees, the flowers, and the rockery, as well as the pavilions are all carefully arranged. There is a hexagonal pavilion on the rockery named Zui Xue (Drunken in Snow) Pavilion. It is actually one of the eight scenes in Xitang. 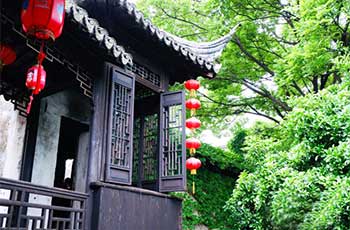 In this button museum, there are more than a thousand kinds of buttons from various eras. Detailed introductions to the origins, development and evolution of buttons is provided too. Visitors can appreciate precious buttons and learn the history and evolvement of buttons. There are also various belt hooks and belt buckles, as well as traditional Chinese costumes with the use of buttons. What strikes the visitors is the world's largest button, the button king, as displayed in the main hall on the second floor.

The house and hall are located in Xitang Town, south of Shaoxiang Harbor South (No. 33-35). The building has the style of the late Qing Dynasty and the early Republic of China. Ni Tianzeng was a great architect and a hard-working official as the deputy mayor of Shanghai. He led a simple private life as he contributed all his energy to the livelihood of Shanghai residents. Ni was an outstanding graduate from Tsinghua University, majoring in civil engineering. In the Memorial Hall, documents, photos, as well as objects keep account of all his contributions over the years. He died of a sudden heart attack after decades of overwork. In 2004, the Hall was announced as a county-level cultural relics protection construction. Now it has become a patriotism education base and an anti-corruption cultural education base. 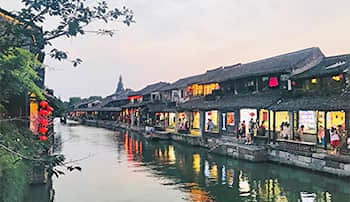 The Gallery Shed is a unique style of building found only in Jiangnan water towns. It adds to the landscape of the town. The so-called rain corridor is actually the street with sheds. The unique gallery in Xitang attracts tourists both at home and abroad. Most of the streets in Xitang have such sheds, so that the merchants trade and pedestrians are free from sun and rain. There are also benches set along the riverside of the gallery for people to have a rest. In the gentle light of early morning, when one strolls under the corridor, the loudest sound is one's heartbeat.

The Ming and Qing Dynasties Woodcarving Museum is located in an old mansion in the north of Shaoxiang Harbor. It mainly houses the wooden sculptures of the residential buildings in the Ming and Qing Dynasties in Jiangnan area. There are beam frames, beam cushions, arches, sparrow frames, lattices, etc., all of which show the unique features of Jiangnan folk wood carvings such as its grace, freshness, softness, delicacy, and diversity. 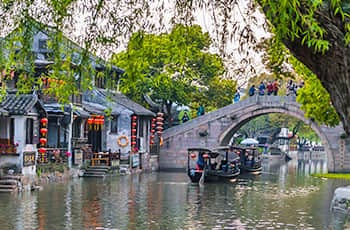 Built in 1581 (the 9th year of Wanli Emperor in the Ming Dynasty), it bridges Xiaotong and Beicui Banks and is considered the earliest tall bridge in Xitang. It is said that people may look at the mountains around Taihu Lake in the north when standing on the top of the bridge on clear days. In 1944, Huanxiu Bridge suddenly collapsed. A wooden bridge was built as the replacement. A simple cement bridge used to be constructed. In 1997, a nice looking single-hole cement bridge was built as per the original appearance. 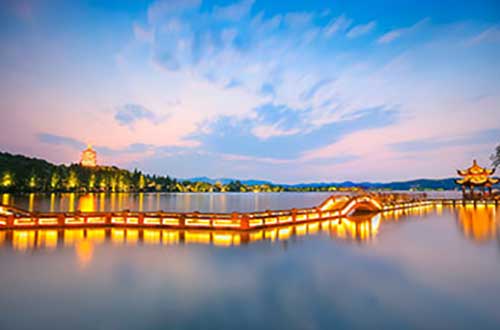