A beautiful and romantic lake since ancient times

Since ancient times, West Lake has always been the soul of Hangzhou. West Lake of Hangzhou has a distinctive beauty in all seasons. Surrounded by shady trees, the region along West Lake boasts green mountains, exquisite bridges, shapely willows, towering trees, graceful springs and deep streams. There are sweet-scented autumn osmanthus, misty willows surrounding six bridges, four and a half kilometers of towering pines and five kilometers of lotus flowers. The famous “Ten Scenes of the West Lake” and dozens of new featured scenic spots successively built in recent years, represent various types of beauty in four seasons and distinctive weathers. The scenic spot of Three Pools Mirroring the Moon is printed on the RMB 1 note. This symbolizes that the West Lake is highly ranked among all the sightseeing attractions in China.

Highlights of The West Lake:

Dawn on the Su Causeway in Spring: 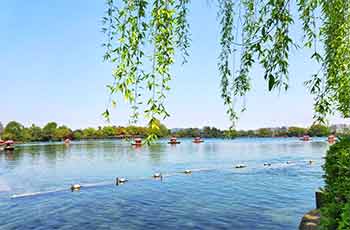 Dawn on the Su Causeway in Spring

The Su Causeway stretches nearly 3 km from the foot of Nanping Mountain in the south to the Qixia ridge in the north. Its history dates back to Northern Song Dynasty (960-1279), when the great poet Su Dongpo was appointed the magistrate of Hangzhou. He built the Su Causeway with the sludge dredged from the West Lake. Afterwards, in memory of Su Dongpo, people named this causeway as Su Causeway. The long causeway over the river connects the South Mountain and North Mountain, adding a picturesque landscape to West Lake. In the Southern Song Dynasty, Spring Dawn at Su Causeway was listed as No. 1 of the “Ten Scenes of the West Lake”. In the Yuan Dynasty (1271-1368), it was also called “Misty Willows Surrounding Six Bridges” and listed in the “Ten Views of the Qiantang River”. It has gained great popularity since ancient times.

The extended Su Causeway with six bridges provides a tourist route with changing landscapes for visitors to stroll around at leisure. When walking on the causeway and bridges, you can appreciate the various beautiful scenes of the picturesque West Lake. 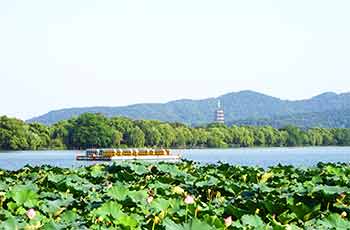 With the theme of “appreciating lotus in summer days”, this is ranked No. 2 of “Ten Scenes of the West Lake”. Emperor Kangxi of Qing Dynasty (1644—1912) ordered the building of the Stele Pavilion of Winery Yard and the Lotus Pool beside the Kuahong Bridge at Su Causeway after touring the West Lake. Appreciating lotus in summer days is the most popular activity in the garden. Lotuses of hundreds of varieties are planted in the ponds. Red lotus, white lotus, Zhongtai lotus, Sajin lotus and Bingdi lotus are particularly enchanting to view against the background of flourishing lotus leaves. Small bridges with distinctive styles are built over the lake. When walking on the bridges, it feels like you are walking through the lotus blossoms. The fragrance of the lotus flowers and the aroma of wine waft perceptively through the summer air, hence the name of the scenic spot.

Broken Bridge is located at the eastern end of Bai Causeway. It is the most famous bridge among the various bridges in the West Lake. It is said that the Broken Bridge was built as early as the Tang Dynasty (618-907). The snow fall period is transient in Hangzhou, south of Yangtze River, not to speak of heavy snowy days. After it snows, the snow-covered lake reflects scenery that is totally different from that of ordinary days. Today’s Broken Bridge is an arched stone bridge with a single archway rebuilt in 1921. It is 8.8 meters high and 8.6 meters wide. Undergoing heavy repairs, the hole stretches 6.1 meters but still retains its archaic and elegant style. The name “Broken Bridge with Thawing Snow” refers not the snow-covered landscape on the broken bridge, but is about appreciating the whole causeway from the opposite high land (including the mountain). The bridge sticks out and appears like a broken silvery chain after the snow thaws. 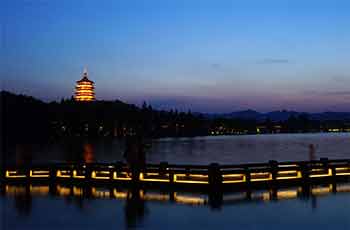 The night scene includes the city view from Baoshi Mountain, Lighted Leifeng Pagoda at night, the music fountain of West Lake, Hefang Street at night, etc. With colorful lights, the enchanting night scene of the West Lake is different from the daytime. The music fountain in the Third Park to the east of the lake shouldn’t be missed. It has a variety of styles with colorful lights and types of music. No matter whether it is traditional Chinese classical music or rhythmic marches, the music fountain is amazing as always.

Surrounded by “Ten Scenes of the West Lake”, the scenery around the lake is combination of natural landscape and historical interest. You can spend as much time as you like and it is not necessary to be at every single scenic spot. Walking, taking a boat ride, hiring a battery cart, or cycling, you call the shots.

This kind of shuttle is available anytime you need. It costs RMB 10 per section and RMB 40 for the entire tour.