The Chinese Museum is the first national silk professional museum and the largest silk museum in the world. It is now a deputy departmental-level public institution in Zhejiang Province, and covers an area of five hectares. Its construction area is 8,000 m2 and its exhibition area is 3,000 m2. It was officially opened on February 26, 1992. Former President Jiang Zemin wrote an inscription for the museum: "Promoting the ancient silk culture and expanding the new Silk Road". The basic exhibits were rearranged in 2003. Since then, the main hall tells the stories about silk, such as the source and involvement, the categories, the Silk Road and the role that silk played in ancient society. There are also five ancillary facilities in the Museum, such as the silk malls, the canteen and the tea rooms. They are good places for recreation.

The shape of the lobby is a towering model of the jacquard loom used in the Song Dynasty. It is probably the earliest jacquard loom people ever learnt to use. The left and right walls of the preface hall display the silk chronology and the Silk Road separately. The back wall is a chart showing the silk quality and production in China, which are both in the top place.

The hall offers the essence of silk cultural relics over the past five thousand years. The constant temperature and humidity of the environment in the hall provide ideal preservation conditions for delicate silk cultural relics. The Museum of Historical and Cultural Relics is divided into two halls according to the eras: one hall mainly introduces the history of silk development from the Neolithic Age to the Song, Liao and Yuan Dynasties; the second hall is dedicated to showing the royal treasures of the Ming and Qing Dynasties and the contemporary archaeological excavation 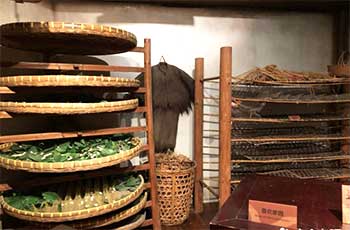 The Silkworm Hall mainly demonstrates the natural attributes of silkworms, adopting a semi-closed display of popular science education contents, such as "Magic Metamorphosis", "Mulberry Leaves Favored by Silkworm Larvae", "Mystery of Silkworms", "Cocoons", "Silk", "Beautiful Creature that Spins Cocoons", "Silk Farming" and "Use of Silk" to reveal the mystery of obtaining silk from the tiny silkworms. Mulberry leaves, silkworm larvae and adult moth specimens, are displayed on picture boards and videos which are used to present the whole process. Many touch screens are offered to visitors to learn the process directly, such as the choice and preparation of mulberry leaves (wet leaves would cause diarrhea of delicate silkworms), the spinning of cocoons, and the organs of silkworms, as well as the silk town and customs of silkworms.

This Hall’s main focus is an elaboration of the extraction, weaving and dyeing of the material. Loom models provide a vivid idea of the labor in ancient China. The exhibition is divided into five parts: “technological process”, “spinning of silk”, “the principle of a loom”, “threads on the loom” and “dyeing”. There is also a studio in the exhibition area in which the visitors can make their own silk crafts. At the same time, the "ZIS Plain Fabric Computer Design System" on the interaction computer allows people to make their own fabric and patterns under the guidance of the museum staff. 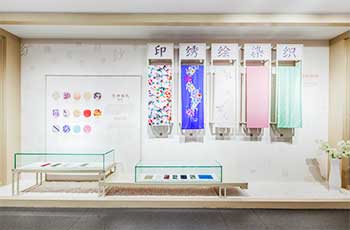 The exhibition is divided into three parts: “Foreword”, “The Origin and Development of Silk”, and “Colorful Chinese Silk”. It tells the history of silk development and the colorful embroidery products. To elaborate the "The Origin and Development of Silk", the parts of "origin and invention – innovation and establishment – integration and evolvement". The understanding of “Colorful Chinese Silk” includes knowing about silk categories, dyeing, fantastic costumes and social status behind the patterns people are allowed to wear (to realize that there are dedicated checks belonging to certain noble houses in Britain). Silk fabric such as Ling, Luo, Chou, Duan and Jin (please refer to more detailed materials or learn about it on site) as well as officially ordered quality materials in the Ming and Qing Dynasties (common practices then) and the process of amplifying texture help to make the tourists instantly understand the differences therein. There is a platform for observation and the scene of the silk studio. Afterwards, no one would be confused about the general terms about the categories of the silk.

6. Corridor of the Silk Road

Through the display of the large ancient Silk Road map and the Han and Tang Dynasties fabrics unearthed from the Silk Road, the concrete prairie or marine routes of the four Silk Roads, the new routes after the Age of Discovery and the encounter and integration of the East and the West are clearly provided. Videos about the Silk Road are repeatedly displayed in a studio in the hall, which is even more informative and vivid. 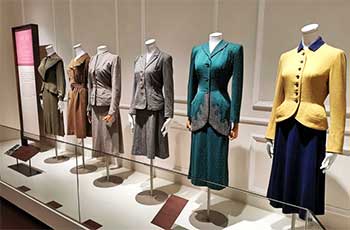 In the three-part demonstration "Ritual to the God", "Officials' Costume" as well as "Costume for General Well-off Family", the ancient scenes when silk was used are recovered. The chronicled costumes such as Ao, Qun, Pao, Fu, Bu Fu (for senior Imperial officials) and Long Pao (the dragon costume for the Emperor) from the Warring States Period (500 B.C - 221 B.C.) to the last Imperial period that ended in A.D. 1912 are comprehensively provided.

This is a place to show the achievements of the last seven decades in terms of silk production, scientific research, as well as trade. There are various kinds of new handicrafts and products. 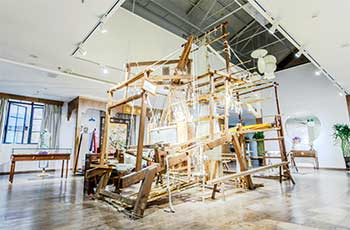 The open exhibition hall in which the live weaving operation is happening mainly shows the current handwork and ancient manufacturing of all ethnic groups. 13 different looms show work conducted by the ancient people, by the natives in Jiangnan area and by the minority ethnic groups in Chia.

Xin-You Documentary Hall is to commemorate the two pioneers in the silk industry in China, Zhu Xinyu and Jiang Youlong. Documentation therein includes modern texture samples, precious figures in the industry, the chronicles of silk, weaving and dyeing custom histories, archaeology about silk, the history of the Silk Road as well as value journals and books in Chinese and all foreign languages, audio and video materials as well as information kept down and organized for the textile industry.