The oldest ancient temple of Hangzhou

Lingyin Temple is backed by Bei Gao Feng and faces Fei Lai Feng (Flying Peak). It is a famous Chinese Buddhist temple and is also known as Yunlin Temple. Built in the 1st year of the Xianhe ruling period in the Eastern Jin Dynasty (A.D.326), it has a history of nearly 1700 years. It is known as the oldest temple in Hangzhou and one of the Top 10 ancient temples of Chinese Buddhism. In Chinese, “Lingyin” means a place where fairies live in seclusion. So it is obvious that the Lingyin Temple is hidden in mountains and forests with a serene environment. The Lingyin Temple is very popular among Buddhist believers, especially on the 1st day of the lunar calendar. The believers all compete to light the first incense, representing a spectacular scene.

You can discover more than 340 Buddha grotto statuaries at Fei Lai Feng (Flying Peak). Most of the sculptures were built during the Five Dynasties. Such ancient grotto works of art are rarely seen in southern China. 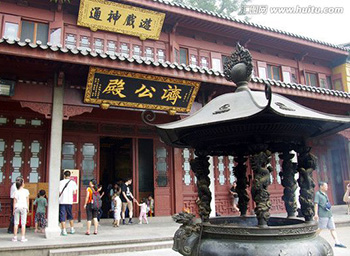 With its serene environment, the temple is the oldest and most famous in Hangzhou City, with numerous exquisite antiques of various dynasties. It is said that it is effective to pray in the Lingyin Temple. Hence a large number of pilgrims come to pay respect to Buddha and pray for blessings every day. The history of 1,700 years makes the Lingyin Temple the treasure house of history and culture: In the Tianwang Hall hangs a board stating “Yunlin Zen Temple”, which was written by Emperor Kangxi of Qing Dynasty; the stone pagodas in front of the Great Buddha’s Hall and the stone buildings in front of the Tianwang Hall are relics of Wuyue Kingdom in the Five Dynasties; and the temple treasures valuable Buddhist relics and wood-carving Longzang of the ruling period of Emperor Yongzheng in Qing Dynasty. Beside the Lingyin Temple is the Monastic Dining Hall of Lingyin Temple. The vegetarian noodles dish in the Shi Fang Yuan is cheap but delicious. 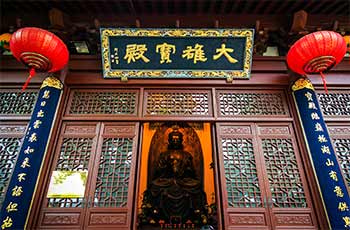 Great Buddha’s Hall is the second hall. It is where the monks chant sutras and study Buddhist doctrine in the morning and evening. In the middle of the hall is a 24.8-meter-high Sakyamuni lotus sitting statue, which is solemn and vivid. With its lowered head, the statue overlooks all living beings, receiving much respect. It is one of China’s largest camphorwood sitting Buddhist statues and a rare religious art work. As Tang-style architecture built in the Qing Dynasty, the hall adopts the traditional technique of a single-deck triple-hipped roof with overhanging eaves as the roof ridge, making the large roof lofty. The yellow glazed tiles and the relief sculpture of flying Apsaras in the hall can be called the art treasure of Chinese ancient architecture.

Tianwang Hall is nearly 24 meters long and 15 meters wide. The niche directly facing the gate enshrines the statue of Maitreya Buddha, who always wears a smile, exposes his breast and sits on the cattail hassock. The niche back to the gate enshrines the 2.5-meter-high statue of Buddhist protector Skanda, who wears a gold helmet and armor, and is in high spirits. The statue was carved from camphorwood. It is a valuable relic handed down from the Southern Song Dynasty with a history of over 700 years. On the two sides of the Tianwang Hall stand the colorful statues of Four Heavenly Kings. Each one is in heavy armor and 8 meters high. Two of them are majestic in manner, while the other two are ferocious in appearance. They are commonly known as the Four Heavenly Guardians. In the Tianwang Hall hangs a board with “Yunlin Zen Temple”, which was written by Emperor Kangxi of Qing Dynasty. 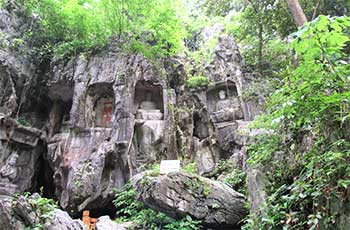 Legend has it that one day, Monk Jigong in the Lingyin Temple anticipated a mountain peak flying from far away. At that time, in front of the Lingyin Temple was a village. Monk Jigong feared that the flying peak would kill the villagers, so he rushed to the village to warn them. Because Monk Jigong liked to play tricks on people, the villagers thought he wanted to make fun of them again and didn’t care about his warning. As the peak was going to fly here, Monk Jigong had no choice but to interrupt a wedding ceremony and take the bride. The villagers all yelled at the monk and chased him. Before long, the wind started blowing and it started getting dark. Suddenly, a peak landed in front of the Lingying Temple and ruined the whole village. At that time, the villagers understood that the reason Monk Jigong took the bride was to save their lives. Thus they called the peak “Fei Lai Feng”.