The highest peak among Guilin hills

The Yao mountain is the highest mountain in Guilin. It is named after a temple on the mountain built for Emperor Yao in the Zhou-Tang Dynasty. The Longevity-Buddha Temple and the White-cloud Taoist Temple are all built on the former site of the Yao Temple. Before the temple lies a piece of rice field called “Heaven-given Field”, as it guarantees stable yields despite drought or excessive rain. At altitudes of 600-700 meters, there is the White-deer Temple. It used to be the residing place of a Tang dynasty Zen master, called White-deer Master. It is also called the Pavilion of the Jade Emperor. Around an altitude of 200 meters, there is the Holy-wishes Nunnery, also called Maoping Nunnery, built in the Ming dynasty. At the foot of the Yao mountain lies the mausoleum of the Ming dynasty’s Jingjiang Prince. The mausoleum comprises more than 300 tombs. On the Yao mountain there are two-way cable cars and a slide-way going downhill. Climbing to the top of the Yao mountain, and you will have a panoramic view of the landscapes of Guilin.

Half way up the Yao mountain lie several acres of rice fields. According to legends, they are granted by Emperor Yao and they are harvested every year, thus called the “Heaven-given Fields”. Water in the fields comes from the Jade-breast Spring and it never runs out all year around. Generations of monks living in the Longevity-Buddha Temple have devoted their lives to cultivating the rice fields as a way to support the daily operations of the temple. The temple enjoyed its heyday in the Qing dynasty, when as a sacred site it was visited by devout believers all year around.

The Heaven-given Spring is in a ravine half way up the Yao mountain, about a hundred meters away from the Yao Mountain TV Tower. A stone carved with “Heaven-given Spring” stands beside the Yaoshan Road. The spring comes up in a stone cavern on the mountain. The spring water is clear and sweet and never runs out all year round. Use the Heaven-given water to brew the Yao mountain tea leaves, and the air will instantly become heavy with the aroma of the tea. 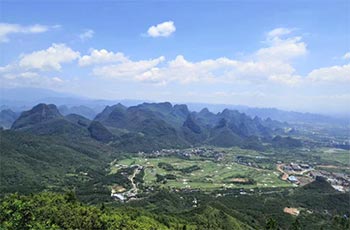 The Karst Landscape view from the top of the mountain

Guilin city is situated at the south-western part of the Nanling ridges. With the average altitude being 150 meters, Guilin displays a typical Karst topography. The limestone that covers the surface of this city, after eons of weathering and erosion, has formed this unique scenery of numerous steep peaks, amazing karst caves, and beautiful stalactites. Climb to the top of the Yao mountain, and you will have a panoramic view of the magnificent Karst landscapes of Guilin.