The Silver Cave is typical Karst topography. It winds through 12 peaks and belongs to the family of multi-level caves. In the cave you can find all sorts of stalactites formed in different geological ages. The Yinzi silver cave is surrounded by green hills and thousands of peach trees. Here you can explore the awe-inspiring and magnificent Yinzi cave, climb the bold cliffs, or go boating and fishing on the lakes outside. As the Yinzi silver cave is home to various stalactites formed in different geological ages, it was praised as the “World Stalactites Wonder” by French geological experts. The Music Stone Screen, the Deep Imperial Palace and the Flying Waterfall in Snow Mountain are together named the “three top spots”, while the three treasures are The Preaching Buddha, the Hunyuan Pearl Umbrella and The Single Pillar. 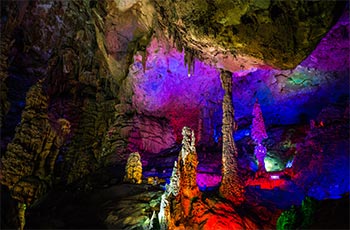 Stalactites in the cave

The Silver Cave is a multi-level cave ascending as high as 16 floors, with 2,000 meters of the cave path developed for tourism. It can be divided into three parts – the ground cave, the main hall, and the upper cave. There are a variety of glamorous stalactites and stalagmites formed in different geological ages.

2. The Three Treasures: the Preaching Buddha, the Hunyuan Pearl Umbrella, and the Single Pillar

The Preaching Buddha stalactite looks like a Buddha statue sitting on the platform with crossed legs. It is said he is preaching Buddhist scriptures, and his pious students come to attend his lecture, unwilling to leave. Here visitors can pay a small sum of money to worship the Buddha.

The Hunyuan Pearl Umbrella is a stalactite like a magic umbrella in a legend, which was used to pray for rain and subdue the devil, now enshrined in the cave as the “Treasure of the Cave”. Its unique shape, thick in the middle and thin at both ends, is still a puzzle to modern geologists.

The Single Pillar descends straight down to the ground, while many branches stretch out like a tree. Visitors are amazed at the power of nature when viewing this scene. 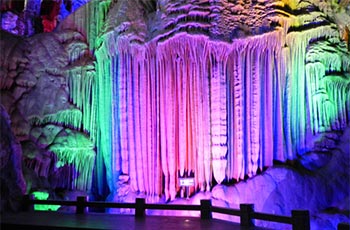 the Flying Waterfall of Snow Mountain

3. The Three Wonders: the Flying Waterfall of Snow Mountain, the Music Stone Screen, and the Jade Pool Fairyland

At the Flying Waterfall of Snow Mountain, visitors are bathed in the shimmering light of the cave. The 20-meter walls are snow white and sparkling like crystal due to the reflection or refraction of intense light, and the stalactites cascade majestically like a silver waterfall. Visitors will feel as if they're in a magnificent snow world, surrounded by waterfalls.

The Music Stone Screen is composed of stone pieces of different heights and thicknesses. This is the most complete set of naturally grown stone screens in Guangxi. When rapping lightly on them, visitors can hear melodious and ethereal tunes. It's easy to lose oneself in the wonderful scene.

In the Jade Pool Fairyland, the reflection in the lake constantly changes because of the subtle changes of the light. Some visitors claim that this kind of scenery only can be found in heaven.