Chinese palm reading is a very old technique of studying the lines on the palm in an attempt to interpret someone’s personality and predict his/her fortune. It is regarded as one of the very basic techniques of Chinese fortune telling.

An important branch of Chinese palm reading is medical palmistry. Based on the traditional Chinese medicine philosophy “If something happens on the interior of the body, it must be reflected on the exterior of the body.” It is used to diagnose a variety of diseases.

Guide to Palm Reading: How to Read Your Palm Lines 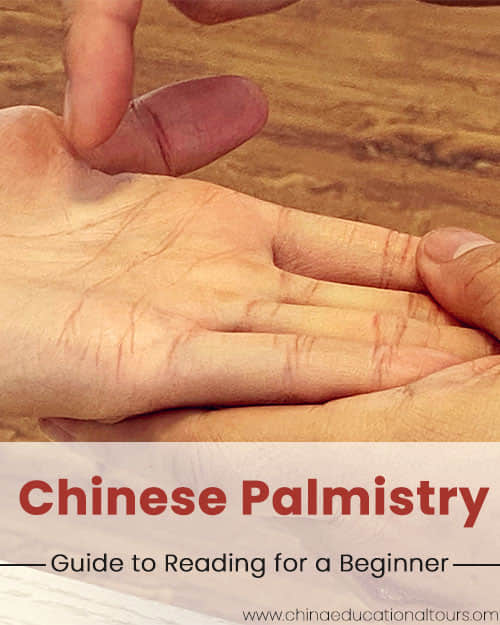 Which palm to read? For many people, the first problem encountered in palm reading is knowing which hand to read, left or right, and what difference it makes. 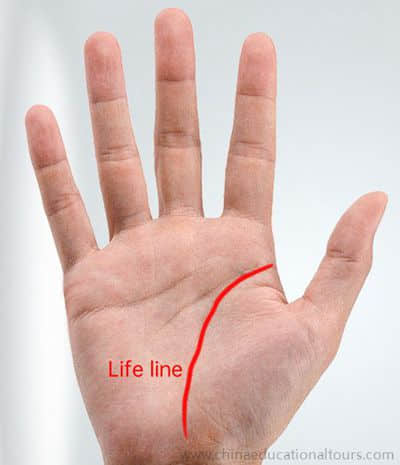 This starts from the palm edge between the thumb and index finger and goes to the base of the thumb. You can find its exact location from the picture on the right. 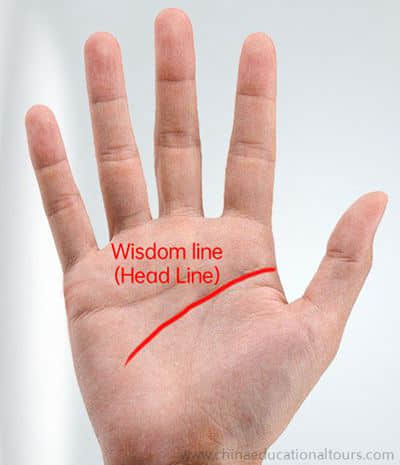 The wisdom line (also head line or intelligence line) is the second important line in palm reading. It starts from the palm edge between the thumb and index finger, and extends across the palm in the middle part with the life line below and the heart line above. It is considered ideal if it ends below where the pinkie finger and ring finger join. Please refer to the picture below. 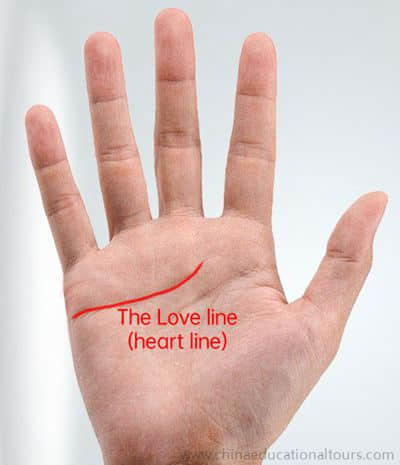 The love line is one of the three major lines in palm reading. It's just above the wisdom line starting from the edge of the palm under the pinkie finger, runs across the palm and ends below the area between the middle finger and index finger. 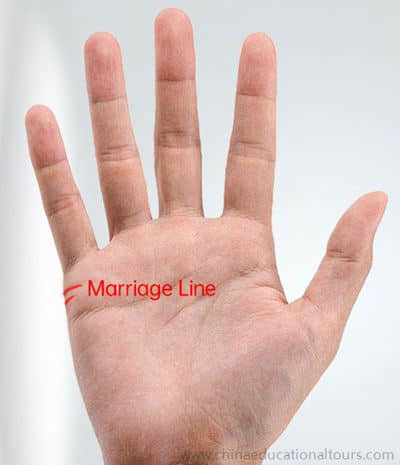 The Marriage Line is a small horizontal line on the edge of the palm between the base of the pinkie finger and the Love Line. Some people have more than one line here. It is not significant how many lines there are, because all shallow lines can be ignored if there are one or two prominent lines. 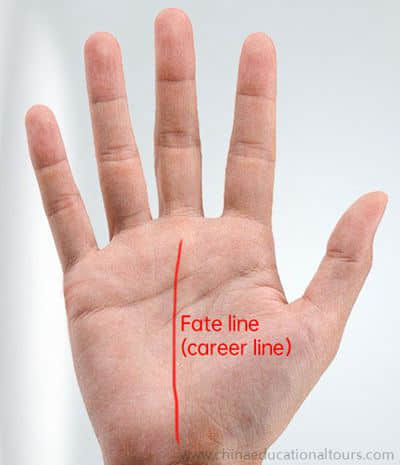 The fate line is one of the major palmistry lines on hands. It is a vertical line running up the palm towards the base of the middle finger. The starting point can be anywhere from the base of the palm (most people find it begins from the middle part). You can find its location from the picture below. 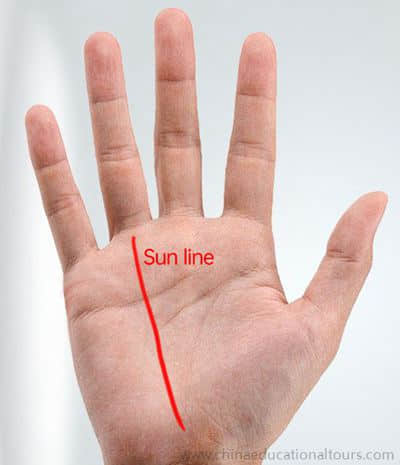 The sun line mainly shows the capability, talent and popularity which may lead to success. So, it's also called the Line of Success. Generally speaking, a long sun line is better than a short one and people with a sun line are better off than those without it. Also, it’s regarded as a sister line to the Fate Line as it could boost the fate line.

Two Sun Lines that appear like a pair indicate the person is famous and renowned. If there are several lines, it indicates too many interests without a particular focus. 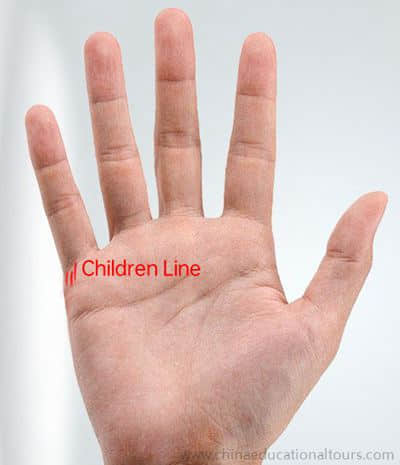 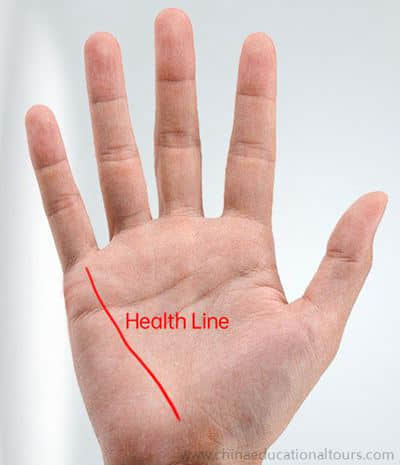 The Health Line is a slanted line from the base of the pinkie finger toward the end of the Life Line. The line should be more accurately named “Bad Health Line”, and it is better not to have it at all.

A segmented line indicates problems with the digestion system.

How to know about your career through palmistry

In Chinese palmistry, the fate line is the career line.

The index finger – when it exceeds the length of ring finger – this demonstrates one is a great leader; he or she is good at management jobs.

The ring finger – if it exceeds the index finger – the individual is creative and likely to cooperate with others in works.

For millennia Chinese people believed that there are maps of the entire body on various parts of the body. These maps can be used to diagnose the corresponding body parts and, in some cases, such as with hand and ear acupuncture, to even treat those corresponding parts. The hand is readily available and can be examined painlessly, relatively quickly, and without expensive diagnostic machinery.

Illness is diagnosed by expert practitioners by careful observation of the appearance of the palm, the hand in general and the fingernails. Chinese palmistry tends to identify a propensity for a disease, whereas fingernail diagnosis identifies the actual presence of a disease.

Migraine: indicated by an upwards slanting line from the upper ulnar edge of the thumbnail.

Dental caries: indicated by an upwards slanting line from the lower radial edge of the thumbnail.

Bronchitis: indicated by an upwards slanting line from the upper radial edge of the index fingernail.

Nearsightedness (myopia): misty or cloud-like shape on the bottom radial edge of the thumbnail.

Diabetes: indicated by a white round dot on the lower radial edge of the ring fingernail.

NOTE: THE PATH TO SUCCESS IS NOT A STRAIGHT "LINE" 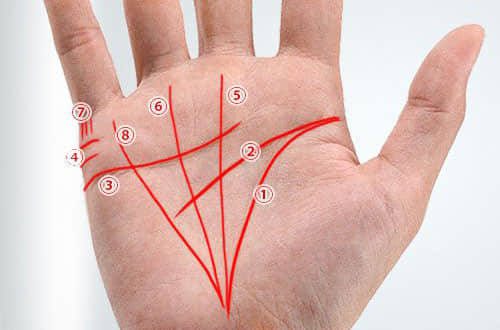 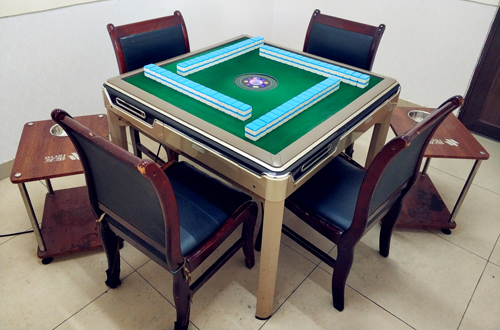