Wuhou Memorial Temple of Chengdu on Wuhouci Street of Southern Chengdu City in Sichuan Province was first built in 223 AD when the Hui Mausoleum of Liu Bei was under construction. As a memorial temple that honors both the monarch and his subjects and the most well-known memorial site in memory of Zhuge Liang, Liu Bei, and other heroes in the Shu-Han Kingdom, Wuhou Memorial Temple is the heritage museum of the Three Kingdoms Period with the most significant influence worldwide. If you are a fan of the Three Kingdoms, then here is an ideal choice that satisfies your curiosity. You’d better come in the early morning when the Temple just opens to the public if you want to be left undisturbed. 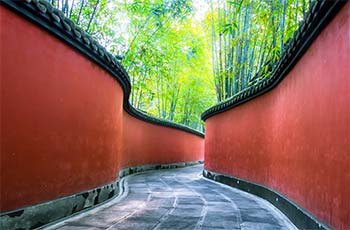 The scene of bamboo shadows against red walls 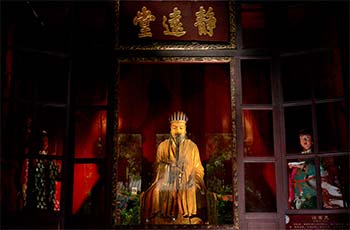 The statue of Zhuge Liang

You would do best to hire a guide who can share historic stories or anecdotes, which may otherwise be missed.