The Sanxingdui Archeological Site and Museum

The most peculiar Cultural Relics from China’s Lost Civilization

Sanxingdui was accidentally uncovered during the summer of 1986 by construction workers. The site of Sanxingdui Museum is located in the city of Guanghan, about 50km northeast from Chengdu. The museum had its foundation laid in 1992, and was opened to the public in 1997, integrating collection, preservation, research and social education.

The findings of this site are known as the some of the greatest archaeological discoveries in the 20th century and the “Origin of Yangtze Civilization”.

The cultural relics at Sanxingdui are the precious cultural heritage of the ancient Shu Culture dating back more than 3000 years. Sanxingdui is believed to have sat in the heart of the Shu state. Since the first discovery in 1929, the Sanxingdui Ruins excavation has revealed a variety of unique and grotesque bronzes, such as Tall Standing Statue, largest bronze mask, and tall bronze tree. Some relics look very similar to the findings at the Jinsha excavation site, which raises a lot of questions about the relationship between the Sanxingdui and Jinsha civilizations. It still has a lot of secrets that need to be uncovered. 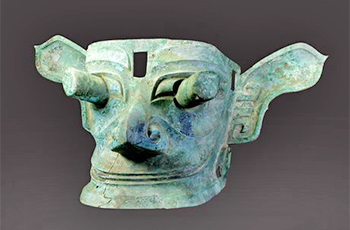 The large bronze mask is about 54.3 inches (1.35m) in width and 26 inches (66cm) in height, has bulging eyes with the eyeballs sticking out about 6.3 inches (16cm), a big mouth with a grin that stretches to the base of the long and large ears, and a curving nose. The appearance differs from the other previous findings. Perhaps it can be regarded as a totemic ancestor.

The total height of the sacred tree is about 155.9 inches (4m), with nine branches on the trunk. There were three kinds of fruits and a sacred bird on every branch, but it was badly broken when it was discovered. Experts considered the bronze tree to be a deity tree. Even though there are different views about its connotation, they think it was regarded as a connection between the Heaven and Earth. It is the rarest specimen in the ancient Shu people’s myth about how to reach Heaven.

The tallest and best-preserved standing bronze man weighs 180kg (400lb), and is 262cm (8.5 ft) tall. This sculpture is important regardless of its clothing, image, or stature. It has extraordinary big, ring-shaped hands, and arms in an embracing gesture in front of its chest. Under the feet is a tall base decorated with various patterns. The figure once held something in its ring-shaped hand, but it has been lost. 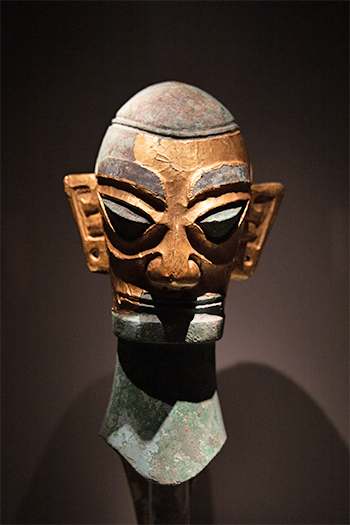 Their faces seem much alike, with big eyes, a wide mouth and long, rectangular ears, but the bronze heads and hairstyles are each shaped differently, among which are only six pieces decorated with gold foil. It is unknown what their function is.

So far, archaeologists have unearthed various cultural items from four of the pits, including pieces of gold masks, gold foil, bronze masks, and artifacts made from ivory, bone and jade. The museum will build a hall to showcase the new findings of excavation and repair. Some part of the new findings will be shown to the public after mid-May, 2021.

Who were the Sanxingdui figures?

These relics look like strange, mysterious objects which tickle the imagination, and make people suspect that the ruins might be related to aliens.

Those masks featuring exaggerated eyes and ears may indicate a supernatural ability to see and to hear. These are neither human face images, nor beasts, but a kind of image of combined deity and human. Due to the unknown origin of the ruins, some archaeologists speculate that they are closely related to a mythical dragon god named Cancong that has similar characteristics. However, who were the Sanxingdui figures? Did they represent ancestors, rulers, deities, or something else? The answers to these questions remain unconfirmed. The mysterious ancient Shu Kingdom has faded away, but it left a lot of secrets waiting for people to uncover the Shu Kingdom in the period of history.