One of the Birthplaces of Chinese Taoism

Located in the southwest of Dujiangyan City in Sichuan Province, and northwest of Chengdu Plain, and inside Mount Qingcheng – Dujiang Weir Scenic Spot, Mount Qingcheng is about 68 km away from Chengdu and 16 km from Dujiangyan City. The Mount earns its name for the thick and evergreen trees across the Mount, which is also surrounded by several peaks which appear like fortifications. 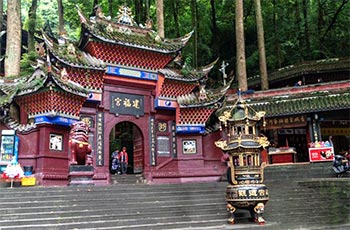 Located at the foot of Mount Zhangren, Jianfu Palace was firstly built in the Tang Dynasty and repeatedly renovated in the following dynasties. There are only two halls and three compounds renovated in the Qing Dynasty left today. Leading figures of the Taoist school are worshipped in the splendid Main Hall of Jianfu Palace. In Weixin Pavilion, the dresser of the Princess consort of Prince Qingfu in the Ming Dynasty, there are pertinent couplets of poetry hanging on the columns of the Hall and murals which are also worth visiting. It is the first Taoist temple on Mount Qingcheng. Towering aged trees add to the grand view of this quiet Palace.

The 394-character long couplet about Mount Qingcheng written in the Qing Dynasty in this Palace is well-known.

Located at the foot of the main peak of Mount Laoxiao, the Cave is deep, with drops of water falling down occasionally. Chaoyao Cave is also a magnificent Taoist temple built under steep cliffs which are part of the terrain. The Cave faces the east and the front arch at the entrance hangs in the air, making the temple a secluded and refined place. 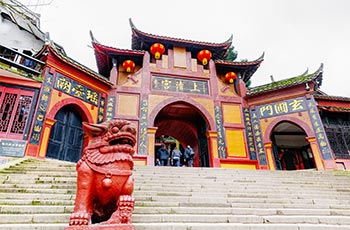 Located at the peak of Mount Qingcheng with an altitude over 1500 m, Shangqing Palace marks the end of the touring route of Mount Qingcheng. Buildings such as Laojun Hall, Sanqing Hall, Wenwu Hall, and Tao Te Ching Preaching Hall in the Taoist temple of Shangqing Palace with several cultural relics, were originally built in the Jin Dynasty. Standing amidst the cloud and mist on the peak and overlooking picturesque scenes under your feet, you will feel like you are in a fairyland. You will find Guanri (watch the sunrise) Pavilion on the top of Mount Qingcheng when climbing up through the stone stairs behind the Palace, which is the best place to watch the sunrise, sea of clouds and magic lamps.

There are scenic spots in front of and behind Mount Qingcheng. Palaces and Taoist temples are concentrated in a relatively small area at the front range of Mount Qingcheng, which takes about half a day to visit.

Behind Mount Qingcheng is a large, deep and serene area with the original appearance, which takes a whole day to visit. It takes at least two hours to climb to Baiyun Temple on the top of the Mount from Tai’an Temple at the foot of the Mount. Most tourists choose to visit spots in front of the Mount, and climbers prefer to visit areas behind the Mount.

Taoist Health Liquor, Qingcheng Tea, Stewed Chicken with Ginkgoes and Qingcheng Pickles can be found in markets of Dujiangyan City and sent out as gifts.