Leshan Giant Buddha, also known as Lingyun Buddha, is located next to Lingyun Temple on the east bank of Min River, south of Leshan City, Sichuan Province, China. The Buddha is a statue of Maitreya Buddha in sitting posture. The 71-meter high statue carved out of a cliff set a record for its kind. The construction started in 713 A.D. in Tang Dynasty and was completed 90 years later. 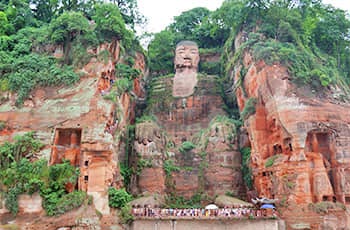 The head of Leshan Buddha is the top of the mountain. Its feet are on the river bank and hands rest on the knees. The solemn looking Buddha with a well-proportioned body carved out of the cliff is sitting properly facing the river. On the same cliff at both sides of the Giant Buddha, there are two stone statues of Dharma patronuses, both over 16-meter tall. The above joined by hundreds of stone statues have formed a large art cluster of Buddhist stone carvings.

The Giant Reclining Buddha, shaped by several mountains, is located on the periphery of the Leshan Giant Buddha scenic spot. The north-to-south ward distance between the Buddhas is about 1,300 meters. This Reclining Buddha has a clear outline and is lying peacefully on the river, from which, visitors could sense the placid emotion. 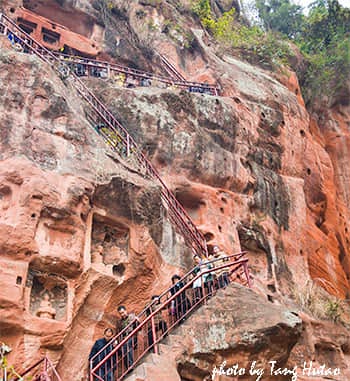 Along the right cliff of the Leshan Giant Buddha, there is a steep plank road as was excavated at the same time when the Buddha was under construction. The width of the plank road is 1.45 meters at the widest point and 0.6 meters at the narrowest point. A total of 217 spiral stone steps lead people down to the feet of the construction. At the top of the plank road is a gallery-style pavilion. The delicately carved patterns valuable for understanding the architecture and stone carving art of the Tang Dynasty.