One of the world’s largest imperial palaces

Located at the center of Beijing, The Forbidden City was the Imperial Palace for both the Ming and Qing dynasties. It is the largest collection of preserved ancient wooden structures in the world. It’s a popular tourist destination with as many as 19 million visitors annually.

When was the Forbidden City built? 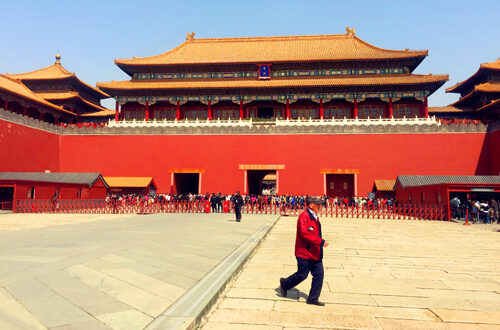 It was first built in the 4th year of Yongle Emperor’s reign (1406 CE) and completed in the 18th year of his reign (1420CE). It took 14 years for the entire palace to be completed. The palace went through a series of reconstructions and renovations during the Ming and Qing dynasties, but has kept its original layout.

In 1912, the Qing Dynasty was overthrown by the Chinese Revolution of 1911 or Xinhai Revolution, the last emperor, Puyi, was permitted to live in the Inner Court (north part of the palace) after his abdication. However, all of the imperial treasures from palaces in Jehol (or Rehe—present-day Chengde, Hebei Province) and Mukden (present-day Shenyang, Liaoning Province) were moved to the Forbidden City for public display in the Outer Court in 1914. In 1924, Puyi was evicted from the Forbidden City by warlord Feng Yuxiang.

In 1925, after Puyi’s departure, the Forbidden City, which had long been off-limits to the common people, was open to the public, hence its current Chinese name 故宫博物院, meaning “The Palace Museum”.

In 1987, the Forbidden City was listed as a World Cultural Heritage by UNESCO.

Why is it called the Forbidden City?

The Forbidden City in Chinese is called 紫禁城 (Zijincheng, literally Purple Forbidden City). The Chinese character ‘Zi’ means ‘purple star’, referring to the North Star, which in traditional Chinese astrology was the eternal abode of the Emperor. ‘Jin’ means ‘forbidden’. Entrance to the city was completely barred for the subjects of the kingdom. Even royal ministers and members of the royal family had restricted entry into various parts of the Forbidden City. Only the Emperor enjoyed the sole right to enter the city and access every area at his own will.

How big is the Forbidden City? 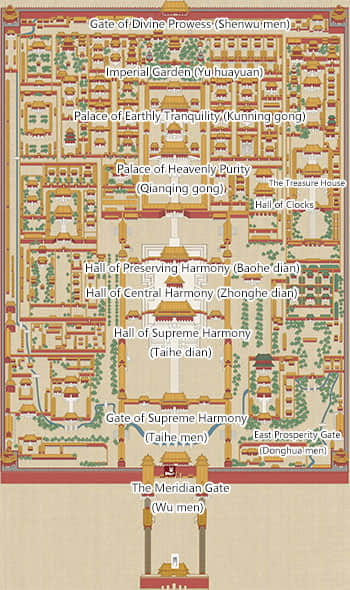 The Forbidden City is on a grand scale. The width from east to west is 753m (2470ft), and the length from south to north is 961m (3152ft). It encompasses an area of 720,000 square meters (7,800,000 sq ft) equaling 1714 basketball courts. The entire palace consists of dozens of courtyards. The total construction area of the palace is approximately 160,000 square meters (1,722,225sq ft). It is said that there are 9,999 and a half rooms in the palace. Around the palace, there is a vermilion wall with a height of 10m (32.8ft) and a length of 3.5 km (2.17miles). On each of the four sides of the palace walls, there are tall gates. In the south stands the Meridian Gate, the main entrance to the palace. The north gate is the Shenwu Gate (Gate of Divine Might). The gate to the east is the Donghua Gate (Gate of East Prosperity), and on the west is the Xihua Gate (Gate of West Prosperity). At each of the four corners of the palace walls, there is a watchtower designed in an exquisite and unique style. There is a 52-meter-wide moat surrounding the palace walls, making the palace in Beijing a heavily fortified castle.

Who lived in the Forbidden City?

Li Zicheng, a rebel leader, nicknamed “Dashing King”, the 25th Emperor who lived in the palace, overthrew the Ming dynasty in 1644 and ruled over China briefly as the Emperor of the short-lived Shun dynasty before his death a year later. In April 1644, Li captured Beijing and lived in the Forbidden City for 28 days.

1. Experience the royal palace and the unparalleled architectural masterpieces of ancient times 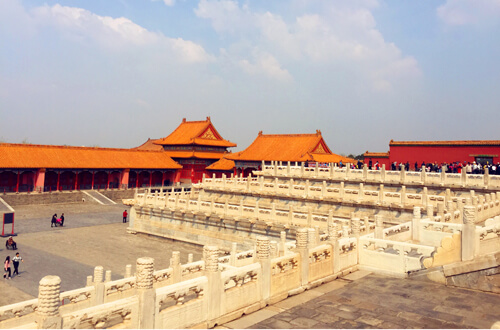 Most travelers who visit Beijing for the first time would consider the Forbidden City a must- visit. The Forbidden City is an ancient wooden architectural complex that is known to be the best conservation and the largest scale in China and the world. It is known as one of the top 5 palaces in the world. The buildings of the palace consist of two parts, the Outer Court and the Inner Court. The palace is divided by the Gate of Heavenly Purity into two halves. The half to the south of the Gate of Heavenly Purity is the Outer Court, and the northern half is the Inner Court.

2. A Myriad of Precious Cultural Relics

There is a huge collection of cultural relics in the Forbidden City. According to statistics, there are more than 1,860,000 items. There are various exhibition halls for the cultural relics based on their categories. Among the exhibition halls, the Hall of Treasures and the Gallery of Clocks are the most popular. The Gallery of Clocks holds a demonstration of timepieces each day from 11:00 to 14:00, and the show would be an eye-opening experience for those visiting.

The Treasure House is located in the area of the Palace of Peace and Longevity. The hall boasts a rich collection of treasures, including Buddhist items, accessories, daily wares, and ornaments. Among the relics, are the 14cm tall lion statue made of red coral, the 137cm long bead-bracelet made of pearls from the East Sea, and the 17.5cm tall golden imperial seal with the characters reading Feng Tian Zhi Bao (meaning Seal Gifted by the Heaven), are all extremely rare items.

4. The Gallery of Clocks 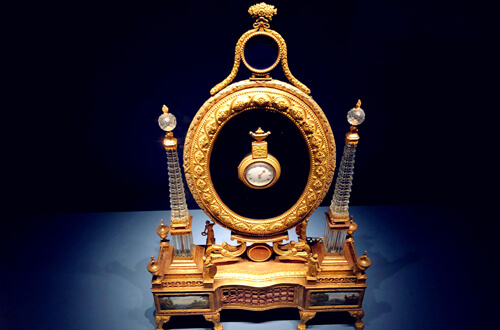 Located in the Hall of Ancestral Worship, the clocks displayed are mostly British products, with a few from France, Switzerland, and other western countries. Most of the clocks are decorated with figurines, animals, and flowers, all of which make different motions. All the timepieces boast delicate workmanship. The 231cm tall gilded copper writing-man clock, the 87cm tall gilded copper clock with a gold-embedded enamel gourd top and the Yuqiaogengdu pattern, and the gilded copper running man and rhino watch are the most valuable and exotic items.

What is the best way to visit?

The Forbidden City is huge and complex. If you are planning a visit, it is recommended at least 3-4 hours would make a visit worthwhile.

If you have sufficient time, you could spend an entire day touring the east and west wings of the palace.

Jingshan Park is located across from the north gate, the exit of the Forbidden City. It is an ideal place to have a panoramic view of Forbidden City and Beijing city as a whole.

How can I avoid the crowds? 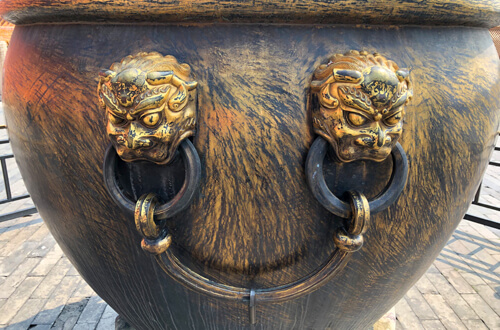 Copper vat in the Forbidden City

The Forbidden City is the number one attraction in Beijing and is always packed with tourists, both foreign and local. Here are two tips to help you to avoid the crowds :

Weekends and Chinese holidays are the worst possible days to visit and you are likely going to regret the decision if you decide to visit the Forbidden City on those peak days.

Tip#2 Visit in the early morning or the late afternoon

We highly recommend heading to the Forbidden City as soon as it opens at 8:30 in the morning when most other tour groups are getting up and or having breakfast. The second best time to visit the Forbidden City in Beijing in the late afternoon, 1 hour before closing time at the latest. The peak time during the day is from 9:30 am to 1:30 pm.

How to Get to the Forbidden City?

You can take public transportation – the bus or subway (metro) to get to the Forbidden City. If you are taking the subway (metro), there are multiple stops you can get off at:

Many bus lines can take you to the Forbidden City. However, it is important to note that there is no stop called “Forbidden City”. Get off at either Tianan men dong (East) or Tianan men xi (west). Announcements are made along the way, so listen for the stops or write down the Chinese characters of these stops, as these are shown on the screen at the front of the bus (or you can ask and show a local person your stop.

Attention: There is only one entrance to the Forbidden City, called the southern gate, or Wumen 午门 in Chinese. Just south of this entrance is the Tiananmen Tower and Tiananmen Square. There is also only one exit gate at the Forbidden City, located in the north. It is not possible to enter in the north and exit in the south. You always enter at the south gate and exit at the north gate. Keep that in mind when you are planning your tour and transportation.

How can I buy the tickets?

The Forbidden City accepts a maximum of 80,000 people per day. It is advised that you schedule your appointment to visit the attraction in advance. The appointment requires the information of your ID card or passport.

The Palace Museum is closed on Mondays except on national holidays.

Can you recommend some books and films about the Forbidden City? 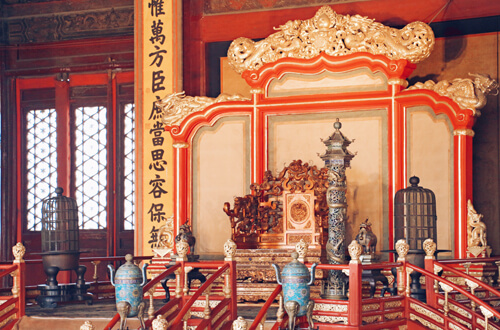 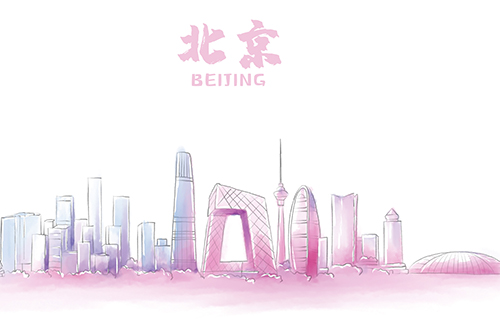 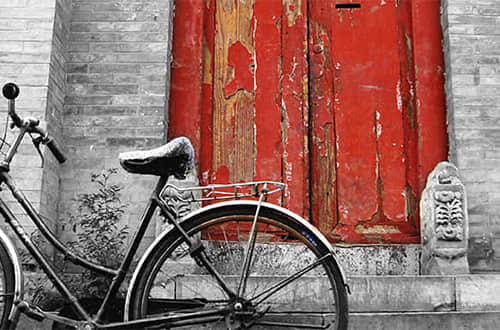 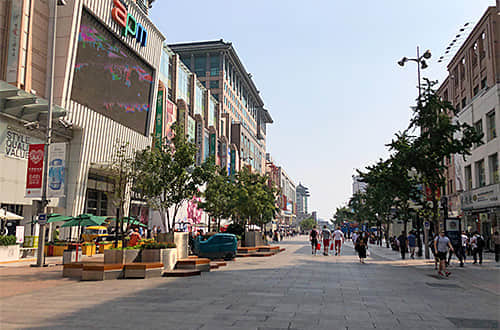 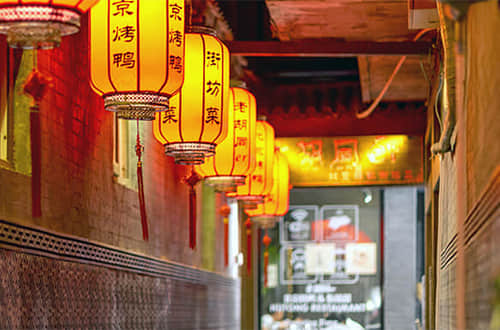