Rice has been cultivated in China for thousands of years and is the world’s largest producer. If you are traveling throughout the southern part of China, you will come across many terraced rice fields which are a common sight across the southern region. The warm and humid climate makes this area ideal for growing rice.

Rice terraces date back to ancient times. This method of growing rice has allowed farmers living in the rugged mountainous countryside to cultivate the sloped, hilly, and mountainous land due to limited farmland enabling them to be self-sufficient. Following the contours of the mountains, they carved steps, forming terraces of many small platforms. Extremely labor-intensive to build, it took generations to complete. The terraced fields decrease both erosion and surface runoff, and support growing crops that require irrigation. Not only do these terraced fields provide essential food for the local people but they also feature some of the most spectacular landscapes in the world. The terraced rice fields of southern China are breathtaking, with flowing lines and vibrant colors that make them look like nothing else on earth. No visit to China is complete without visiting one of these stunning terraced rice fields. Here, we have listed 9 of the most beautiful terraced rice fields below:

‘Longji’, means Dragon’s Backbone in Chinese and refers to the summit of the mountains resembling a dragon’s backbone while the terraces look like the scales of a dragon. The terraced fields are found in Longsheng County about two hours’ drive from Guilin. Built by the Zhuang people, construction and cultivation of the rice terraces began in the Yuan Dynasty in the 13th century and continued during the early Qing Dynasty in the 17th century. Today, the rice terraces cover an area of 70 square kilometers with the steepest slope standing at an angle of 50 degrees. You can visit the terraced rice fields throughout the year, as in spring they look like glistening ribbons that run along the edge of the hills, summer is when the rice is in bloom giving waves of greenery, while autumn brings a tint of orange just before they get harvested, and winter it will be blanket with snow.

The highlights of Longji Terraced Rice Fields include three villages: Pingan village, Dazhai village, and Guzhuang village. If you enjoy hiking, you can trek across from Dazhai village to Pingan village, approximately 16km (10 miles), and takes about 4-6 hours. Along the way, you will meet the Yao and Zhuang ethnic minority people, living in their traditional wooden houses, and dressed in their traditional clothes. 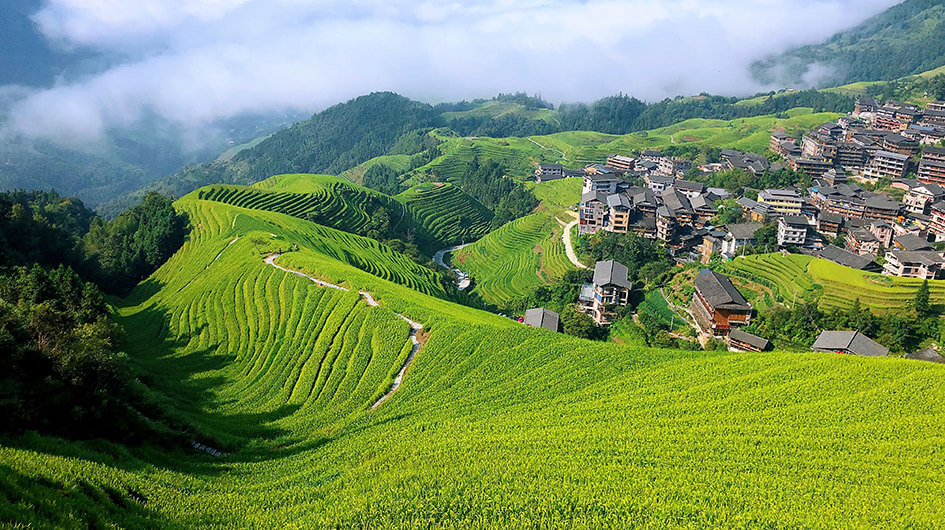 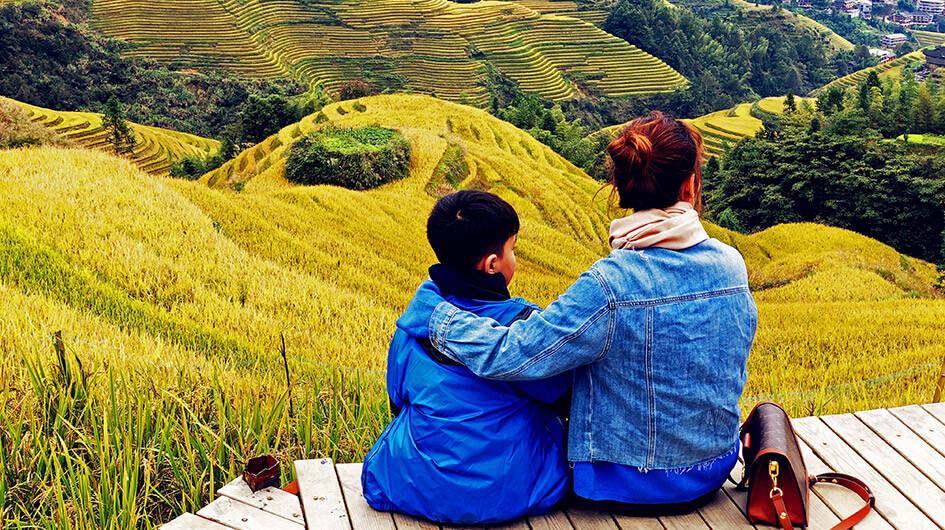 The terraced fields of Yuanyang are located in the southern slope of Ailao Mountain, in Yuanyang County, Yunnan Province. Integrating the terraced fields into the unique landform, forests and plant covers, valleys and streams, and other natural landscapes, it is a masterpiece of the Hani tribe built over 1,300 years ago. Tiers of terraces cover the mountains, ranging over 16,603-hectares. The grand scale of the interlinked slopes is astonishing, and when viewed from a distance, the wavelike terraced fields seem to sparkle in the sun. The Hani people live in villages situated between the mountain-top forests and the terraces. The villages feature traditional thatched “mushroom” houses.

The beauty of the terraced fields was recognized in 2013 as a UNESCO World Cultural Heritage site. The best time to visit here is during the winter to early spring when the entire field is irrigated with spring water from the forest above to rejuvenate and prepare for the next planting season. 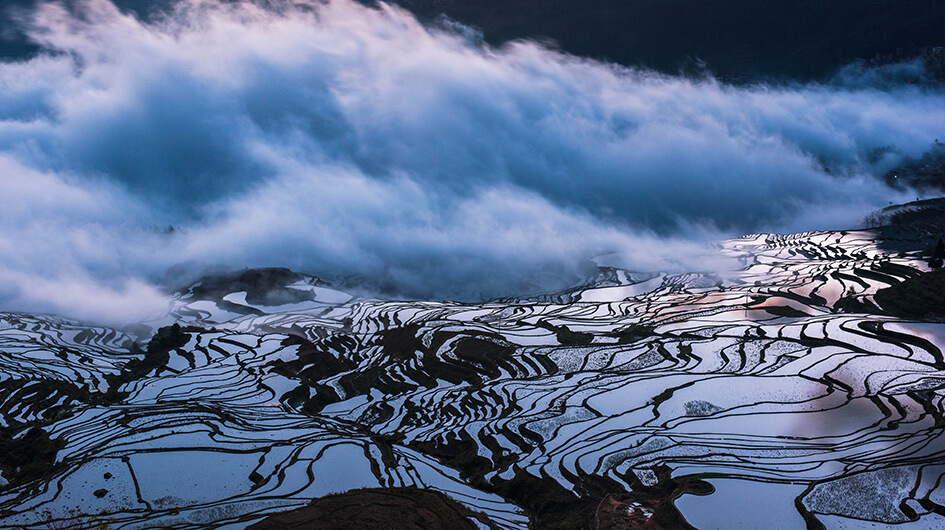 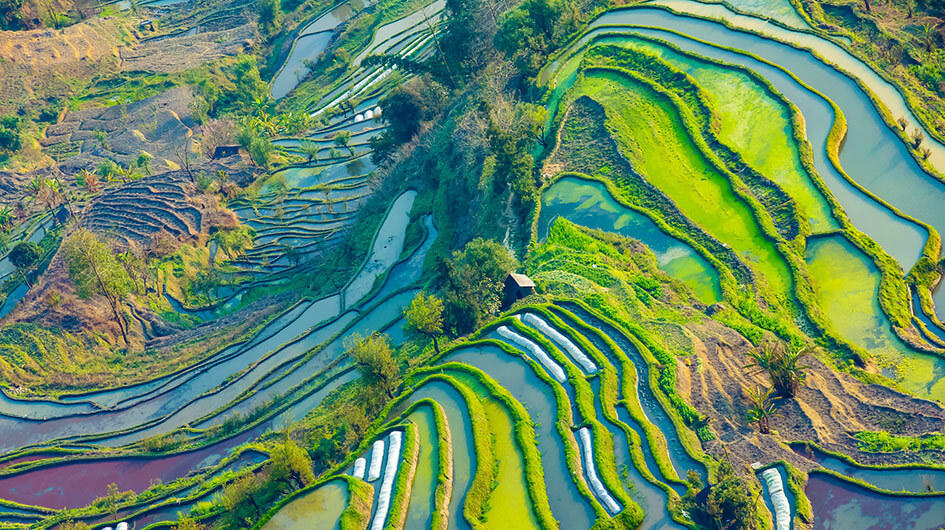 The Jiabang Terraced Rice Fields are located in Congjiang are one of the largest in Guizhou. This area is inhabited by the ethnic Miao people, also known as the Hmong outside of China. These fields cover an area of over 6 square kilometers of hills, and ethnic villages belonging to the Miao people. It boasts a captivating landscape all year round. In spring, the yellow rapeseed flowers set the tone. When the rice is planted, and as the season changes, the green shoots turn yellow, providing an appealing atmosphere for photographers who enjoy taking shots of nature. The farmers in the area make full use of the land, as not only are rice planted, but they also rear fish and ducks in the paddy fields. The fish and ducks help reduce weeds and insects that are harmful to rice crops, as well they provide extra income from them, along with the main crop they yield. This unique agricultural system has been listed in the Globally Important Agricultural Heritage Systems. 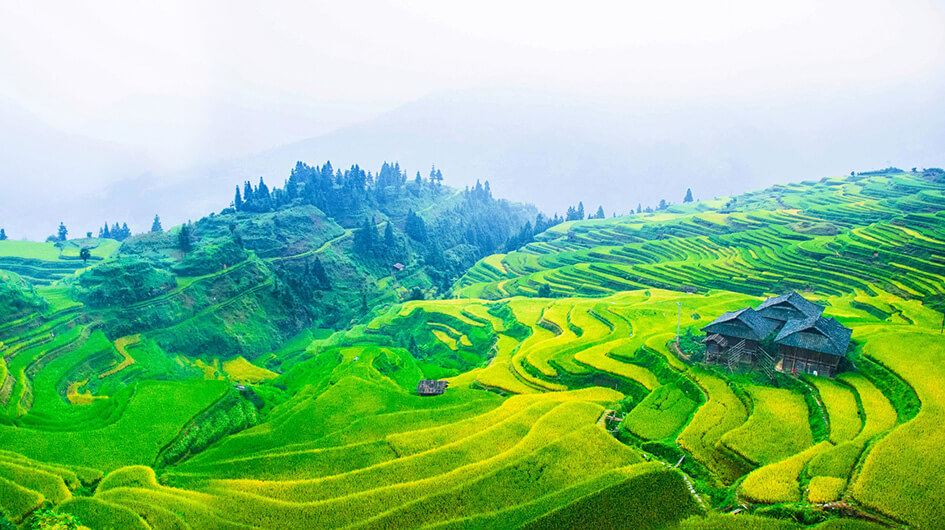 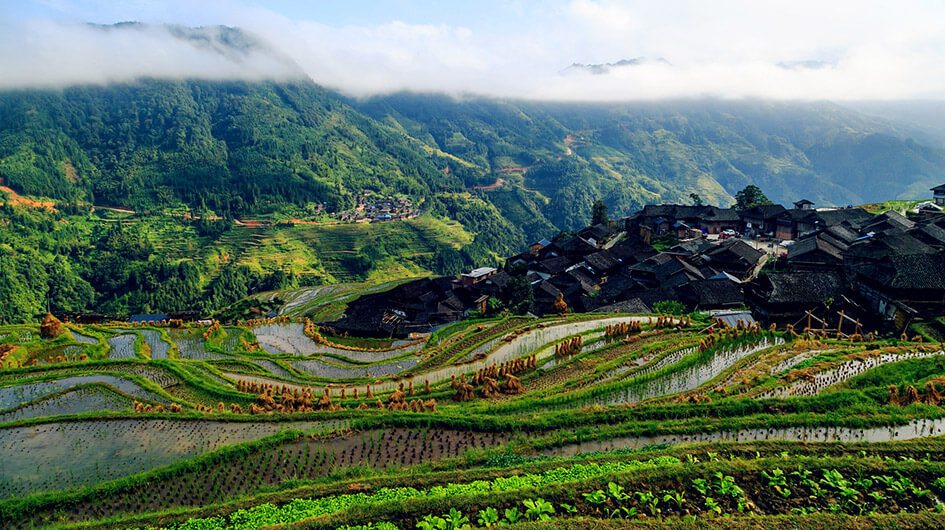 Like Jiabang Terraced Rice Fields, the Gaoyao Terraced Fields are also carved out of the hillsides over the centuries by the Miao people, who, according to their genealogy, migrated from the north around 800 years ago. Plan a visit during one of their festivals to enjoy the vibrant colors and festive activities of the local ethnic people. In late March, a festival called the Kaigeng Festival (beginning of the agricultural season) is held at the first rice paddy or “ancestor paddy”, where offerings are made to the gods for an abundant harvest, and traditional activities are performed in their costumes, with dancing, and playing the Lusheng (a traditional musical instruments).

In late October, when the rice has harvested another festival called Chi Xin Jie, which means ‘ Eat New Rice' Festival, is celebrated, where long tables are arranged through the center of the village and the entire villages come together to dine and drink together, often for several days to give thanks for the harvest.

Yunhe means “Peaceful Clouds” in Chinese. As its name implies, seas of fluffy clouds roll thousands of miles over the terraced fields, valleys, and streams throughout the year. Covering an area of 51 square kilometers, with more than 700 levels of terraces, and an altitude from 200 to 1400 meters (656-4593 feet), is the largest terraced field in eastern China. It is home to the She ethnic minority people, an ethnic group with about 700,000 members. In the early Tang dynasty (618 -907CE), the She tribe migrated from northern Fujian to Lishui in Zhejiang.

With the high altitude, visitors can soak in the amazing scenery, with a sea of clouds, as well as bamboo forests, valleys, streams, waterfall, and stone villages. In spring, you can find azalea flowers next to the terraced fields. In summer, myriad shades of green blanket the terraces, like a fluffy blanket. In autumn, green turns to gold, and zephyrs create waves across the rice fields just before harvest. In winter, crystal rime transforms the mountain into a winter fairyland. 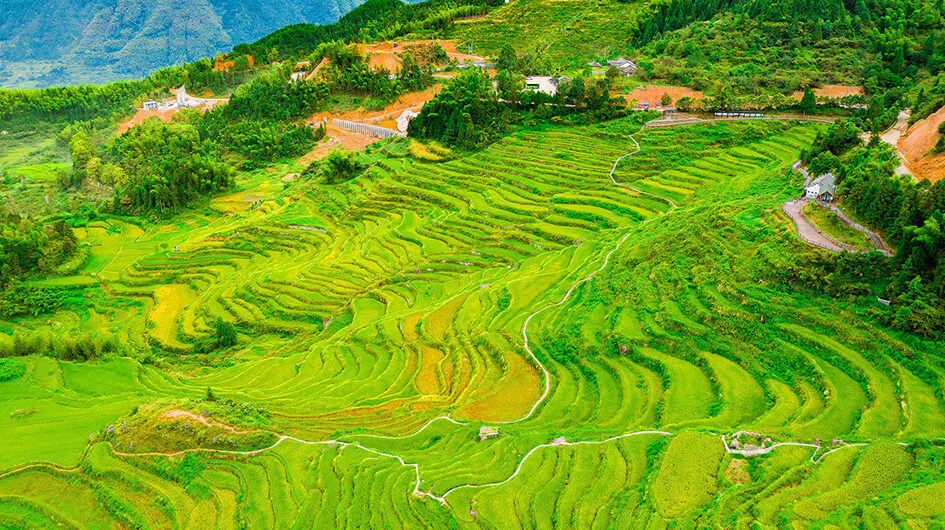 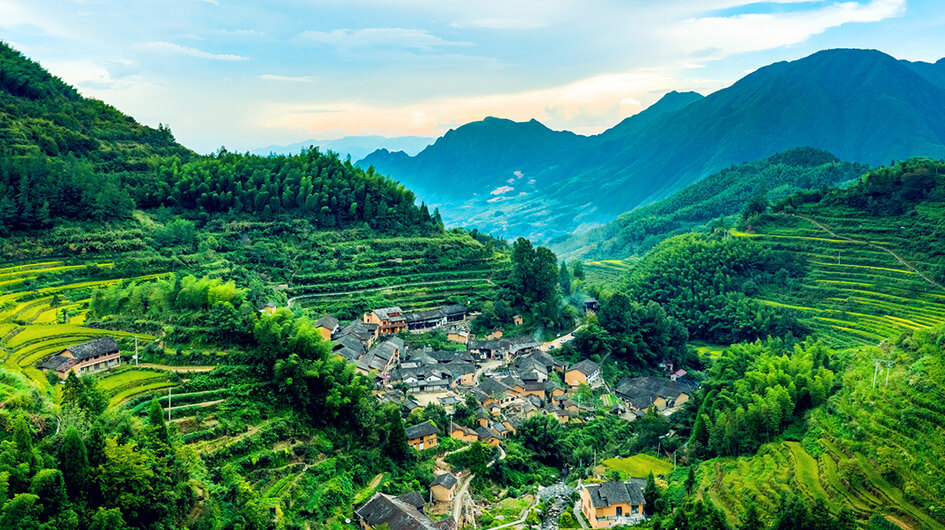 The terraces, covering an area of nearly 66 square kilometers are located in Gong Country and Junlian County. The fields represent a breathtaking natural painting for visitors, giving them views that look like a ladder with thousands of steps leading up toward the sky. Due to its remoteness, the place is unknown to many. While visiting the fields, you can also explore the hanging coffins of the Bo people, an ethnic minority people living along the borders of modern-day Sichuan and Yunnan provinces. The Bo culture dates back 3,000 years. The Bo’s unique burial customs differ from other ethnic groups, as the coffins are sculpted from durable hardwood logs, unpainted, and hung. The most recent hanging coffins were made 400 years ago in the middle and later periods of the Ming Dynasty (1368-1644), while many of the earliest ones date back 1,000 years to the Song Dynasty (960-1279). 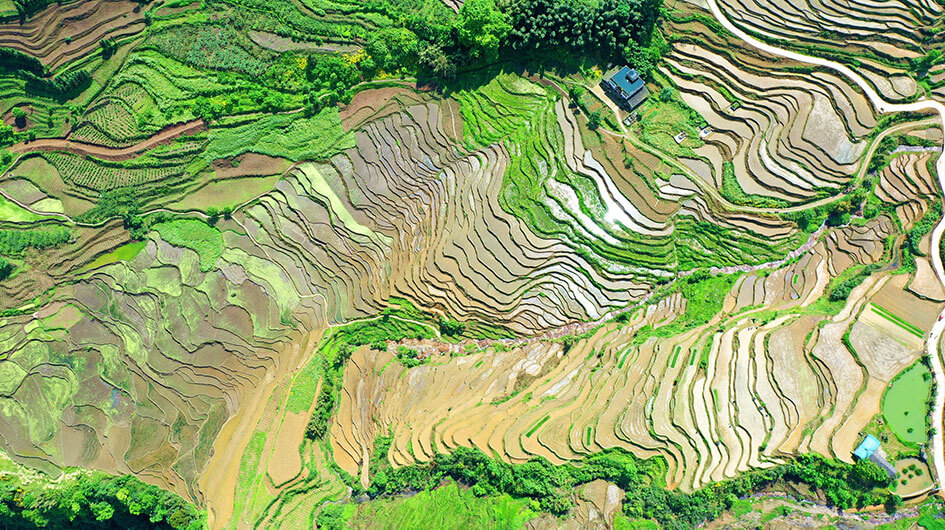 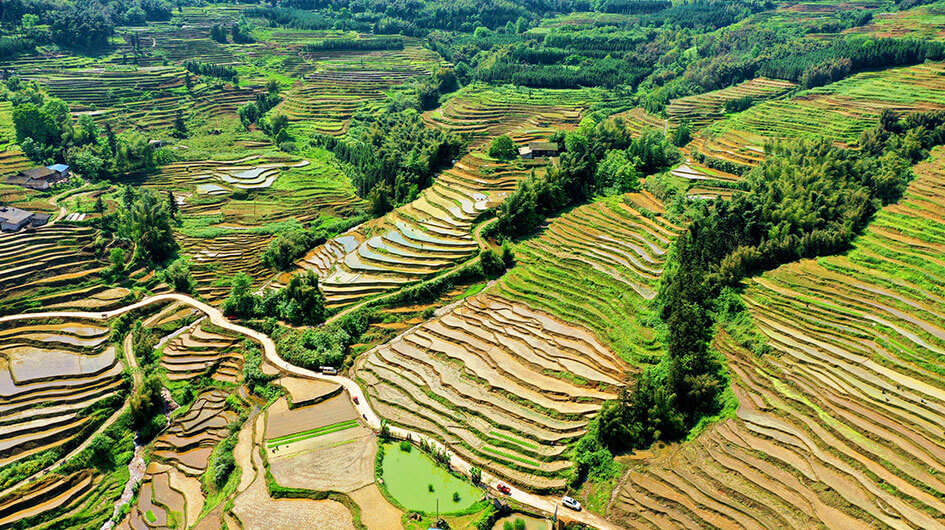 Jiangling is a small peaceful village deep in a secluded mountain valley. Featuring immense terraces cascading from the hilltop to the bottom of the valley, and the breathtaking bright golden sea of rapeseed flowers (canola flowers) stretching to the horizon. The best time to shoot rapeseed flowers is mid-March to early April. Jiangling is part of the Wuyuan Cultural and Ecological tourist area described by many as the most picturesque village in China. Wuyuan is home to the most well-preserved ancient Hui-style architecture with black tiles and white walls. If you are interested in ancient architecture, then Jiangwan village is a must-visit. The buildings have ornate wooden carvings that hang from the building’s uppermost floors, and resounding rooms fill their interiors, that depict the village’s past glories. 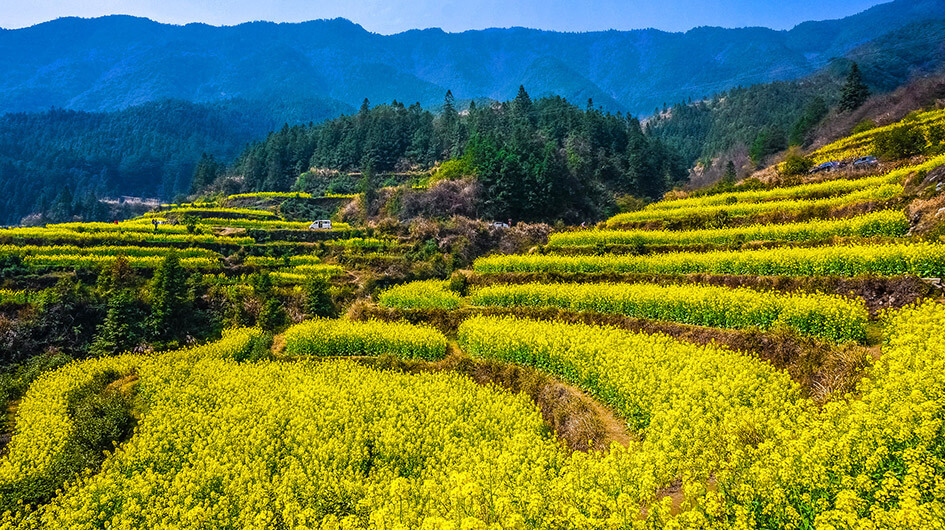 The settlers of Youxi can be traced back to the Tang Dynasty over 1,300 years ago. It is one of the earliest large-scale ancient terraced fields excavated in China’s history. The Lianhe Terraces are 900 meters high, and 260 meters at the lowest point, with a vertical drop of nearly 700 meters. There are 7 square kilometers of terraced fields with 8 villages nestled in the midst of them. The cascading terraces are magnificent and give a vibrant scene.

Youxi is also home to the famous and scholar and educator Zhuxi (1130–1200). He became a leading figure of the School of Principle and the most influential Neo-Confucian in China. There is so much to explore in Fujian Province from ancient architecture, the terraces, tea, and is a paradise for photographers.

Constructed during the Qin Dynasty (221 BCE– 206 BCE), it is the oldest terraced field in China. Ziquejie Terrace covers an area of 53 square kilometers, and over 500 levels of terraces, spreading all over the hills at an altitude of 500 meters to 1,000 meters. The fields are irrigated by natural water flows and villagers plant and harvest rice by hand. From the top of the field, you can see layers upon layers of terraces that are mapped on the hills like green waves rolling among mountains.

China has much to offer from ancient architecture and villages, megacity metropolises to natural wonders. Whether you are a keen photographer for landscape or enjoy hiking and exploring the countryside, these terraced rice fields make a wonderful destination to explore for anyone. Let us know your interest so we can help you plan and visit one of these terraced rice fields. 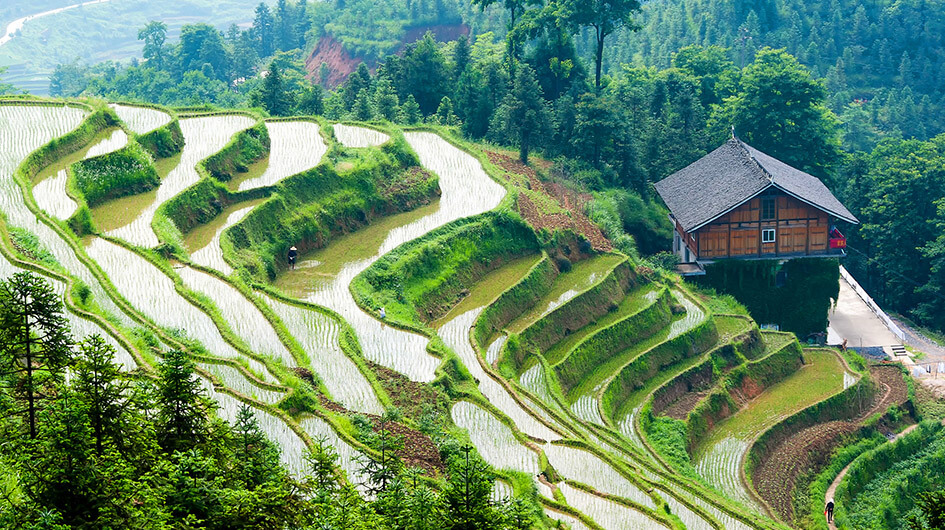 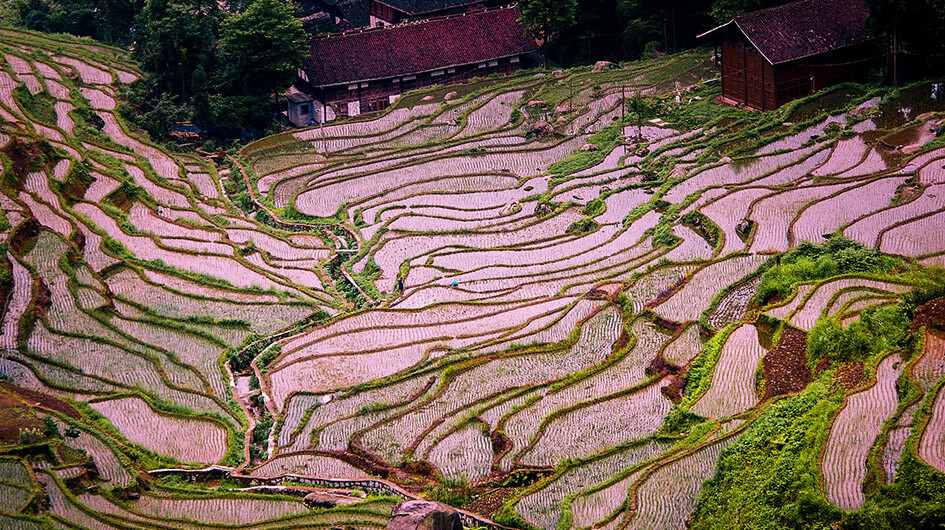 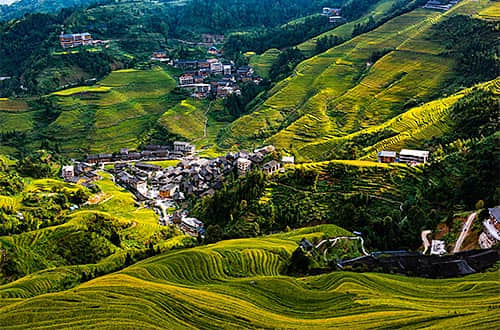 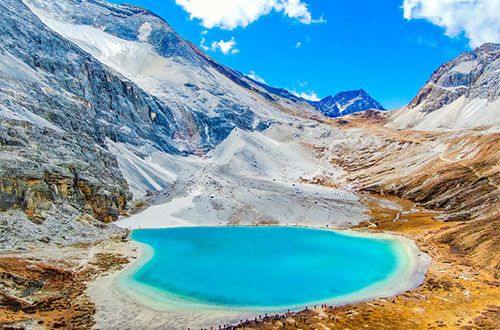