Some people say that High School is the best years of your life.

“High School is a lot of fun”, said no one in China, ever.

It’s all about the big exam called the “gaokao” which students have to sit at the end of High School. In fact preparing for the exam is the reason why they spend those years in High School. Some people have said that whole idea of the exam is to purposely make life miserable for teenagers, but of course that is not true at all. China is such a massive country with an overwhelmingly huge population that there has to be some way of sorting out who is suitable to enter higher education and, eventually, who are the best people for the best jobs.

The pressure starts from the moment kids are born. While you were running around in your back yard with your brothers and sisters, each little Chinese kid is surrounded by six adults – their mum and dad and their four grandparents – all watching them hopefully to see whether they will grow up clever and become rich or famous. Because of China’s “one child policy” (designed to keep population growth under control) it is unlikely that there will be any brothers or sisters to take some of the pressure. 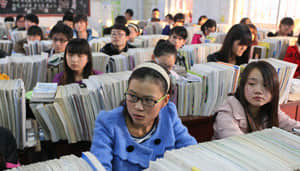 All through Primary School the little Chinese kids are already stressed as they are constantly reminded that they are being prepared for High School. They all graduate into Middle School, or Junior High, and then it’s time for the first important exam. This exam decides whether they even get into High School, and only 70% of students who finish Middle School go on to High School. Unlike Primary School and Middle School, High School is not free, and many students go to boarding schools further from home, hoping to be in a school that gives them the best opportunity for a high score in the big exam. 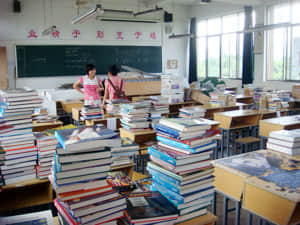 The best thing about High School that many young people want to hang on to and remember – possibly for the rest of their lives – is the friendships. “BFF” or “Best Friends Forever” is a promise often made between students at High School in Western countries.

So you might think that Chinese students must also have High School friends in the same way – why on earth wouldn’t they? Considering that in the end all of their fellow students are their competitors in the big exam, some might feel that it would be foolish to trust anyone. For the very competitive students who are really feeling the pressure this might be a reason to limit their friendships.

Of course it’s not really like that for everyone. Chinese kids are as keen on having friends as any other kids, especially as they mostly don’t have siblings. The problem for them is really a lack of time. They have no time for talking, for chatting, for playing, for hanging out. There is nothing like the Spring Break that western students so look forward to. There are a few holidays – not very many – which are times when they don’t have to actually be at school. But that doesn’t mean they get to stop studying. Over the three years of High School the schedule starts tough and gets tougher, time for sleep gets less and less. Classes start early and finish late. When there is no teacher present, students sit and memorise lists of facts. Meal times are short, and then they return to their books whether in the classroom or their bedroom or dormitory.

You would think that at least on the weekends there would be a chance for some rest and recreation, but there isn’t. To start with they might get one weekend a month when they can go home to their parents – and study there. But by the final year this diminishes to once in 3 months that they get a day (not a whole weekend) to visit home. Any “free” time that they do get is quickly taken over with extra courses or tutoring.

In some countries you can get into a good tertiary institution based on your physical or sporting skills. Physical fitness is important for Chinese students too, and at the beginning of High School many of them spend two weeks in something like boot camp, with lots of regimented physical exercise. Unfortunately by the final year of High School PE is dropped in favour of exam preparation. If a young person has exceptional physical skills then maybe they can get selected and move out of the mainstream schooling into a special school for ping-pong, acrobatics, gymnastics, or even martial arts.

The mid-morning exercise sessions might continue for everyone with the students showing less and less enthusiasm for the movements as sleep deprivation takes its toll. Also twice a day many students are guided to do eye exercises in the classroom to keep them alert when the lessons are exceedingly boring and repetitive. The teachers generally stand at the front of the class and talk, and the only involvement the students have is when they are required to recite. There is no group work and no interesting problem-solving activities as in western High Schools.

So what is the big scary “gaokao” all about? A bit like the SAT, or GCSE, or TEE / WACE in other countries, the results of this exam decide which (if any) tertiary institution a student will be eligible to attend. And the big deal is that more than 40% of students miss out because there just aren’t enough places. To get a good white collar job – as their family hope they will – they really need to graduate from a good university or college. Even if they get into a university and earn a degree, there is no guarantee that they will find a job appropriate to their qualifications.

Many schools have bulletin boards showing how that school’s scores compare with other schools, because of course that is how the value of a particular school is measured. And then there is also a sign declaring how many days are left before the next exam. It is meant to be motivating, but you can imagine for many students it would just feel scary to know how soon their future will be decided and they would never feel totally ready.

For students at High School in western countries one of the biggest distractions is the opposite sex. For Chinese students the feelings are no doubt there for many, but dating is forbidden, and the pressure from family and school administration is intense enough to make them conform to the rules.

Naturally everyone looks for ways to beat the system, to cheat on the test, especially when it feels like it might be the only possibility for them to succeed. However when it comes to the final big exam, things are very strict and very little cheating is allowed. The test runs for two or three days, and is held in a big hall or similar place with outside proctors.

Naturally there are always exceptions. Some families such as poor farmers in the countryside just don’t get a look in, the children never even make it into High School whether they want to or not. And some families are so rich that their teenage kids are not too bothered because they know that they could fit right into their parents’ business after muddling their way through school. These rich families can easily afford the fine that is imposed for having a second child, and so there might be a brother or sister to keep them company as well as aunts and uncles to relate to. These rich parents might also be able afford to send they children overseas to study where money can almost buy them a pass through university because the fees they pay subsidise the fees for local students.

The Chinese government is not insensitive to the difficulties faced by students, and they are always trying to find new ways to overcome the problems of having such a large population. There are some schools that are called “Experimental” schools which some of the luckier students get to attend. At these schools various new ideas are experimented with, and from here a really bright student can sail right through High School and into tertiary education without being subjected to the “gaokao” exam. Of course these particular students are exceptionally bright and would have got a good score in the exam, but the experimental school allows them to avoid some of the misery along the way.

So the next time you feel like complaining about High School, remember that you will look back at these as the best days of your life, unless you are a Chinese High School student.