a kast cave with all related features

Huanglong Cave is located in Wulingyuan Scenic and Historic Interest Area, the core scenic spot of Zhangjiajie City, Hunan Province. It is a UNESCO world heritage site and one of the twelve geoparks in China. It is a typical karst landform and is listed as an international tourist cave member and one of 35 Ace sites nationwide. As one of China's AAAA (4A) tourist areas, Hunan's top tourist attractions, Hunan's famous tourism trademarks and Zhangjiajie's tourism route, it enjoys the reputation of one of the world's wonders. 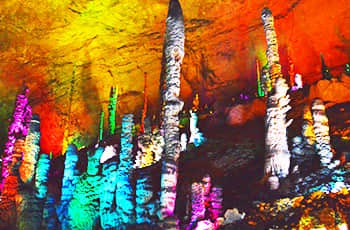 The cave structure of Huanglong Cave has an ideal height, and is spacious with tens of thousands of stalagmites and cave waterfalls. Tourists may explore the cave both on water and on land, which is quite rare. There are many more holes and rivers to be discovered in Huanglong Cave. Stone caves, stalagmites, stone columns, stone flowers, stone branches, stone pipes, stone pearls, stone corals and other scenes are formed by the condensation of calcareous solution. It is an underground palace and the devil has escaped. In Huanglong Cave, there are extremely high ceilings, deep underground rivers, suspended waterfalls and dense stalagmites. The tourism resources are of high scientific research value.

As one of the three largest waterfalls in the cave, it falls from a 30-meter-high honeycomb-shaped cave grotto and forms a beautiful waterfall spectacle. The waterfall, with a drop of 27.3 meters, never ceases for the whole year. People may marvel at its flow as this happens in a cave. On the top of the cave is a mountain. The woods on the mountain are dense. The surface water on the mountain gathers into a stream, and penetrates the cracks in the cave ceilings to form such Waterfall. 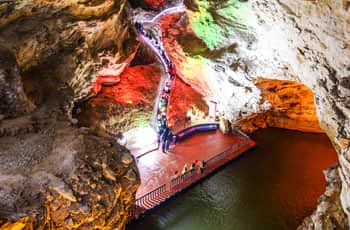 Xiangshui River is an underground river that flows in the second layer of Huanglong Cave. It has a total length of 2,800 meters and an average water depth of 6 meters. The water temperature maintains around 19 degrees Celsius, offering an ideal living environment for the national second-class protected animal, the giant salamander. Traveling on a boat on Xiangshui River, tourists can see the towering cliffs and stalagmites on both banks. Scenes such as Stone Flower Island and Dragon King's Helmet are numerous.

Tianzhu Street means a market in the heaven, where the immortals can trade. All the stone flowers are blooming on the west street and the Heaven Place on the east street is covered by a tall, deep cave. Looking up along the long-collapsed slope, the two large stone pillars and flow stones were dissolved by the groundwater into a wonderful hollow. The name "Shiqin (stone musical instrument) Mountain" was given because of the wonderful euphonious notes when one knocks lightly on all places. 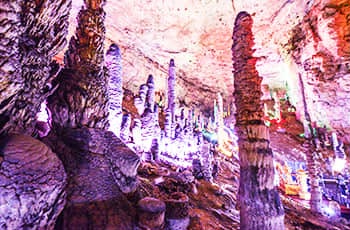 The fourth floor of Huanglong Cave is “Dragon Palace Hall”, which is 16-30 meters higher than Huaguo Mountain and Tianzhu Street that belong to the Heaven Market on the third floor. The Dragon Palace Hall is the largest hall in Huanglong Cave. It is the first and most ancient hall in Huanglong Cave as well as the hall with most developed stalagmites that is open to tourists in China. The bottom area is 14,000 square meters, and the average height is 40 meters. There are 1705 stalagmites and stone pillars, of which 516 are above 1 meter tall, and the distribution density of stalagmites is 0.12 per square meter. The entire Dragon Palace is magnificent and primitive.

In the Dragon Palace, there is a tall and thin stalagmite, which is the "Dinghai (calming the surges and waves) Shenzhen (giant metal column)". It is 19.2 meters high, with thick ends and a thin middle, as the thinnest part is only 10 cm in diameter. The story goes that the Monkey King once broke into Dragon King's Palace in the east sea and took the giant iron column that helps calm the surges in the ocean as his weapon. “Dinghai Shenzhen” grows on the collapsed slope and is the tallest stalagmite in Huanglong Cave. Scientists estimate that it would have taken at least 200,000 years to reach such a height. The upper end of the "Dinghai Shenzhen" is 6 meters away from the top of the cave. There is dripping water at the top. The landmark of Huanglong Cave is still growing and the result cannot be expected even after a few generations. 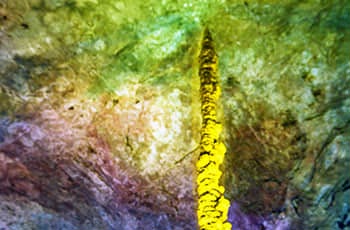 The labyrinth is located at the bottom of Huanglong Cave. The stalactites are extremely concentrated. The white stalactites, stalagmites, stone pillars, stone sarcophagi, stone flowers, curly stones, stone pearls, stone corals, etc. are exquisitely transparent. The labyrinth as the essence of the Huanglong Cave covers an area of about 1600 square meters. The "Dragon King Throne" is in the center with thousands of stone pillars and stalagmites standing around. In addition, there are acoustic stones in the cave. The roof in the cave is as high as 50 meters. The situation where there are waterfalls and mountains together in a karst cave is rare in China.