situated on cliffs above a waterfall

Furong Town used to be called Wang Village, and is an ancient village that dates back to two thousand years ago. Liye Town in Longshan County, Pushi Town in Luxi County, Chadong Town in Huahuan County and Furong Town are the Four Towns of Xiangxi (northwest Hunan Province region). It also has the names of Youyang Xiong Town and la Petite Nanking (Little Nanking). When the film ‘Hibiscus Town’ was screened, with Jiang Wen starring in the leading role, it caused a sensation, complete with the name, and naturally the town is named after it. Now it is rated an AAAA (four As) scenic area.

The two-thousand-year old ancient town is also an attraction that integrates natural scenery with primitive simplicity. In addition, it is the portal to the Mengdong River Scenic Area, a charming place of karst landforms. As is described in the novel ‘Furong Town’, by Chen Yunhe, the pack basket is swinging on the back of the girl who speaks a Xiangxi dialect, and the life in the Mengdong River Scenic Area has many tales to tell. Located deeply in the mountains and waters, zigzag lanes can be even found in the downtown area. Houses built on stilts are on the waterside. Green flagstones pave the five-mile street. Tourists find the place unforgettable. 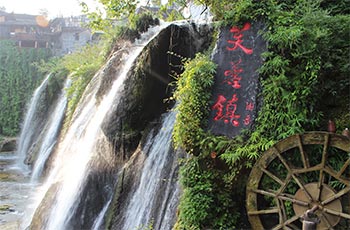 Right at the entrance of the Furong Grand Fall, there is a cave which was the dwelling place for the early humans. The cave that used to hold thousands of people became what it is now after having been flooded numerous times in thousands of years. According to a study, the ancestors wore long hair and no shoes. Their languages, if any, were probably uttered in bird or beast like noises. 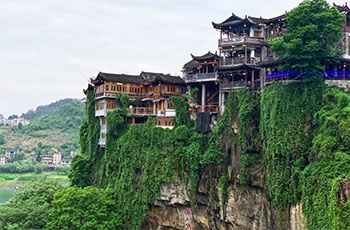 Tusi (appointed national minority hereditary headmen in the Yuan, Ming and Qing Dynasties) Palace is a highlight of a tour in Furong Town. It was built by a well-off Tusi as a summer escape. As it is next to the cliff, the noise from the vigorous stream in front of the palace can be clearly heard.
During the reign of Tusi, the barracks were also stationed here.